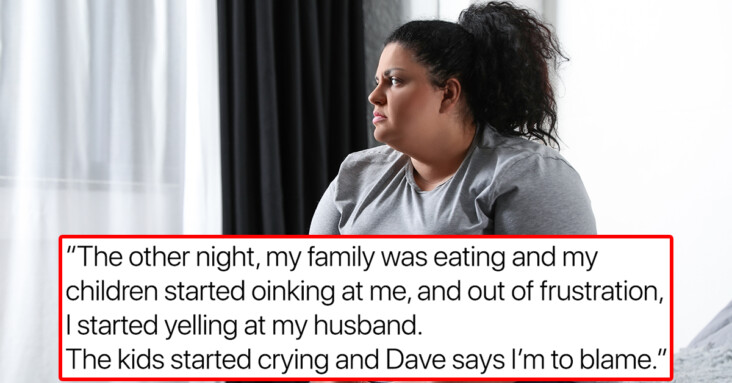 The period of time after having a baby is often incredibly difficult on the person who had the baby. Not only is there a whole baby to take care of every minute of the day, but you are also recovering from a pretty major medical event that can have long-term effects on your physical and mental health.

New parents should have the support of the people around them, but a Redditor posting under the name u/throwaway1368989 is getting undermined by her husband instead and he’s even tricked her into feeling bad about being angry.

The OP says she gave birth in October and says it’s been hard to lose the “baby weight” because she’s experiencing postpartum depression:

I get next to no sleep attending to my children and most mornings, I can barely get out of bed, much less drive to the gym. It’s been a dark few months for me. I’ve told these things to my partner “Dave” (43 M) and though he said he understood, I don’t think he really does.

Though never explicitly stating it, he makes jokes and comments that imply I’m lazy and that he’s no longer attracted to me.

She says about a week ago, she opened up to him about not being able to lose weight and he responded by saying he would “push her” because he “loves” her.

She says he’s taken a Biggest Loser approach, by which she means her husband is verbally abusing her. He started calling her “Ms. Piggy” and told all her friends, family, and their kids to join in:

I hate this nickname, but he says it’s supposed to motivate me to lose weight. I think he really believes it’s going to help me, but I feel really undermined while parenting because of this nickname.

The other night, my family was eating and my children started oinking at me, and out of frustration, I started yelling at my husband. We have a rule not to yell in front of the kids, but we’re almost always in front of the kids during quarantine and I feel so dismissed.

The issue here is definitely not the OP losing her temper in front of the kids one time. It’s her husband thinking this is an appropriate or helpful way to support a woman who recently gave birth who is struggling with depression. Dragging his own kids into it is a horrendous thing to do.

But it doesn’t seem like the OP really gets that, because she feels so guilty. Commenter after commenter tried to tell her that this wasn’t her fault, and her husband isn’t helping—he’s abusing.

Maybe these comments will be the intervention this mom needs to lose the dead weight—the man she’s married to.