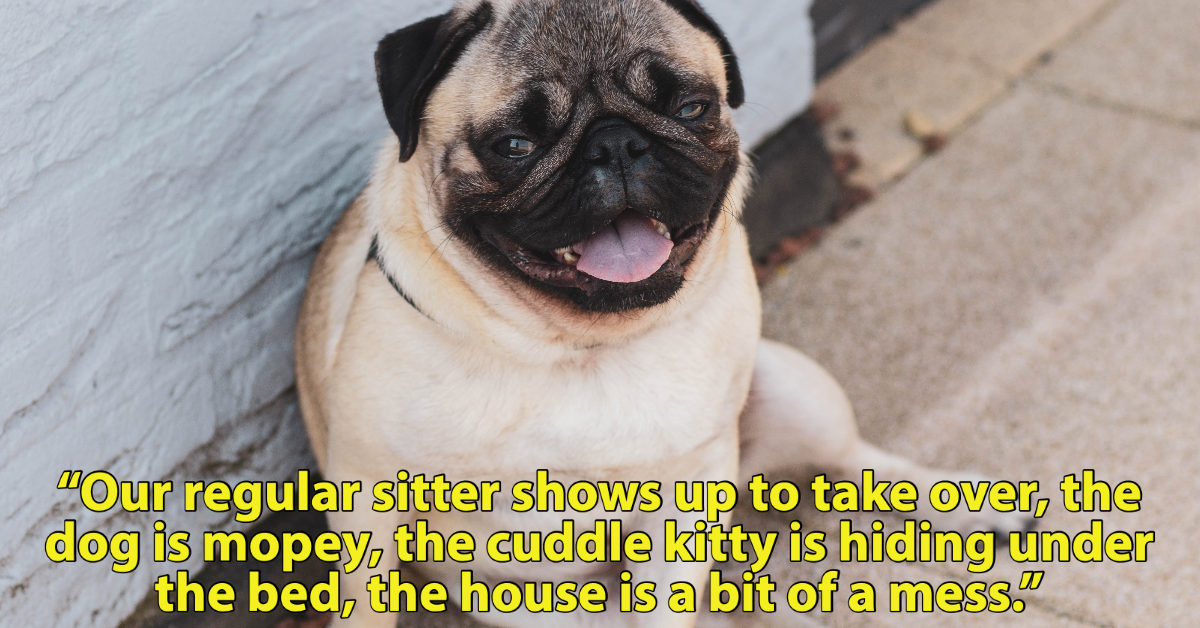 When you pay for a pet sitter, you expect them to keep your pet healthy and happy. Some websites help you find a pet sitter with good recommendations, and you feel like you can trust them. But what if you used the app to find someone and they wanted to go off-app?

One couple on Reddit hired a dog caregiver on Rover, but then discovered that their dog sitter was less than reliable, having people over to their home and not providing the agreed level of care. What should to they do to make sure other pet owners can avoid that experience?

“We recently hired someone off Rover to stay with our pets while we were in another state (1 dog, 2 cats). When we met Roverman (early 20s), we really liked him. We told him that our half-border collie dog needed a couple decent walks and potty breaks during the day and before bed. Roverman seemed totally cool with that and planned to spend the weekend vegging with the pets. Perfect. He wanted to go off-app so as to not incur fees. Sure, great reviews/background checked, whatever. We paid him half the fee up front.”

“The first day, he texted to ask if he could have a friend over because he felt lonely. No problem! On the second day, we checked the Ring to see our dog. What we saw was him sitting out on the patio with two friends. Fine, but it would have been great if he’d told us that it was two friends instead of one. We looked more for the dog and saw she’d only been taken out the evening before and then that morning. NOT GREAT. We decided to keep an eye and see if it continued (mistake on our part for sure).”

“LATE late on the third evening, we got lots of incoming notifications. I open one up to see Roverman having some rather intimate moments with another person on the patio. Shocked, I checked and saw that not only were the friends back but they’d brought two others, dressed for a sexy time. The dog had not been taken out since 7pm. My partner texted Roverman, telling him we weren’t cool with a party at our house and asking that his friends leave. After a bit of time and no response, he attempted to call but Roverman’s phone was turned off. When I tell you we were spiraling!”

“The morning of the fourth day, we don’t hear from Roverman until 10:30ish, though we did see two of the people leave around 8am (they came back around noon and then left again an hour later). His phone died, he said. It wasn’t a party, he said. We were just playing Mario Kart, he said. Fine, we said, please take the dog out before you leave this morning. Ok, he said.”

“Around 1:00, he still hadn’t taken out the dog. At this point she hadn’t been out in 18 HOURS. My partner texted, asking him to take the fluff out. I’m just doing dishes, he said. LEAVE THE DISHES TAKE THE DOG FOR A PEE IT’S BEEN 18 HOURS, we said. Not quite like that. Less yelling, as we were still concerned that he could do whatever he wanted and we’d have no way to stop him. He takes the dog for a walk, leaves.”

“Our regular sitter shows up to take over, the dog is mopey, the cuddle kitty is hiding under the bed, the house is a bit of a mess (fair, we told him to just go). Nothing too serious, except for the upset pets. When we got home a couple days later, the animals were back to normal, no harm/no foul. So here comes my question: WIBTA if we didn’t pay him the second half and reported him to Rover? At the end of the day, no actual harm was done (no signs of bladder infection in the fluff), but we don’t feel that he held up his end of the deal and we will never hire someone off that app again.”

Absolutely not — he didn’t do his job and your pets were really unhappy!

“NTA – you do need to report him, unfortunately. It isn’t about the pets, it’s about the disrespect to your home. That’s a huge deal breaker for these at home services because their reputation relies on the customer being comfortable with a stranger in their house. He completely violated that trust and put the Company in a compromising position. The Company needs to know so they can improve upon their at home service for everyone else.” —

“It’s not about the pets? Waaay more about the pets than the house. It’s straight up animal abuse to not let a dog pee for 18 hours. F*ck the disrespect to your house, he actively harmed the living creatures he was responsible for.” —

“Him going off-app means that any negative interactions he has with clients won’t be reflected in the app, since I’m assuming that you can’t rate someone you never hired in the app. If you complain to Rover about him going off app, they might ban him, but then they get into a ‘he said, she said’ over what really happened. They’re also not going to really want to help you since even if they believe you; you used their service to find someone, and then screwed them out of their fee, even if they boot the guy off their site for doing the same thing.” —

“You did not hire him through Rover, but that is how you found him? If so, Rover probably won’t want to deal with either of you again. Good to keep him from doing this to someone else, but also cuts off your source of sitters.” —

“NTA for withholding the rest of the payment. But why would you report him to Rover when you didn’t use Rover? Rover has no obligation to even address your concerns. Like if you hired the fry cook from burger king for a side job cooking at your house, and he burnt the meal, would you call burger king and complain?” —

“It would be worth it to at least try to report him. They might still do something about it based on what you tell them and what evidence you can provide. At the very least, can you leave a review? I know, as a pet owner, I would appreciate knowing this kind of thing.” —