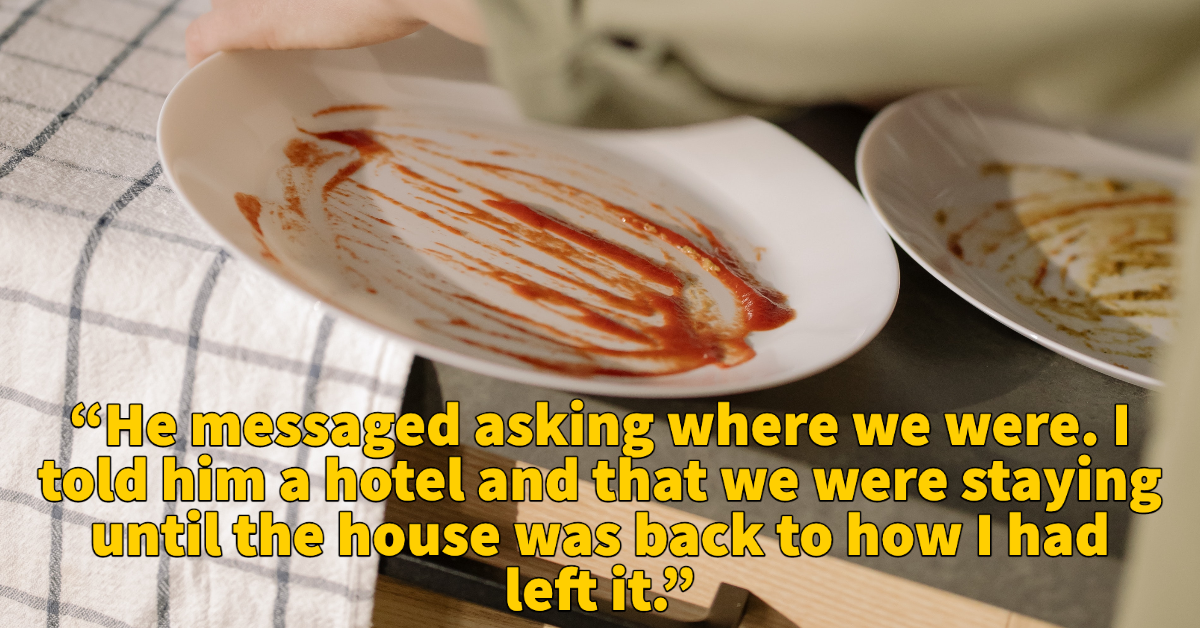 The division of labor in a household is typically the most common issue between partners. Someone usually feels like they are doing more work — and that can breed resentment.

One Redditor with an incredibly sloppy (and seemingly thoughtless) partner returned home from camp with her child after a week to find the house in a wreck. The garden wasn’t watered, the kitchen was a mess, and everything else was in a disaster — her husband had done nothing. So the OP left with their child and went to stay in a hotel until the mess was cleaned up.

“I(36f) had to take my child(11) to camp last week. We left on a Friday and returned home this last Friday. My husband(38m) was not able to get the time off of work so he stayed home. This is not new for us, typically we switch years on which parent take time off to go. This is our last year having to h a very a parent attend,” the OP writes.

“Before I left, I cleaned the house, made a few freezer meals (I don’t trust him in the kitchen as he can’t cook to save his life, not a problem for me) and generally just wanted to make things easier as he was going to pick up alot of over time while we were gone. No big deal and yes, he normally takes on 50% of the chores. The only thing extra he had to do was water my garden and send a package out for me.”

“Well, we went to camp. It was a blast but I was so ready to be home after. When we got home Friday evening, I couldn’t believe my eyes. The house was a wreck. I honestly don’t know how it got to that level in a week. He hadn’t done a single thing while we were gone. My garden hadn’t been watered, the package hadn’t been sent, the living room and kitchen looked like a hurricane had went threw.”

“I was beyond mad and packed our child and I some clean clothes and checked into a hotel. When husband got home. He messaged asking where we were. I told him a hotel and that we were staying until the house was back to how I had left it. He complained saying it wasn’t that bad and he needed help to clean half of it because that was our jobs. I told him I didn’t make half the mess so I wasn’t cleaning it. It quickly devolved into a huge fight where he thinks I’m the AH for not doing my half of the chores when I got home. AITA here?”

What do Redditors think this Mama needs to do?

“NTA. If you both do 50% of the chores, then how did he trash 100% of the house? In one week? For him to trash the house in your absence and still expect you to do ‘half’ the work to clean it- major entitlement issues on his part. And for him to say cleaners are a waste of money- he comes across as someone who thinks domestic duties are beneath him. Can’t cook, won’t clean, won’t pay a cleaner, expects you to clean his mess. He needs to grow up. Weaponised incompetence,” said

“NTA. If he wants to be lazy while you are gone, cool, nows his chance to do so without it affecting anyone else. But he can say least whip round on the last day and get it up to standard,” said

“NTA. WHO REFUSES TO CLEAN THEIR OWN HOME!? THEIR CHILDS ACTUAL HOUSE!? Honestly, he did it on purpose because you would do it. It sounds to me like perhaps you do more than you realise, if he is pretending he cannot see muck and filth and admit he’s been neglectful and lazy that sounds too close to weaponised incompetence and like he thinks guilting you into cleaning up after him is normal. Good luck. He sounds sh*t,” noted

“From your previous comments this sounds completely intentional. It sounds like he just assumed you went off to play at camp, so he decided to be a slob and force you to clean when you got back. He’s showing no respect for you, your son, or the house,” explained

“NTA, one person should make less mess then 2 people and that is half of the chores. You need to rethink whether he actually does 50%. I think your math is off,” said