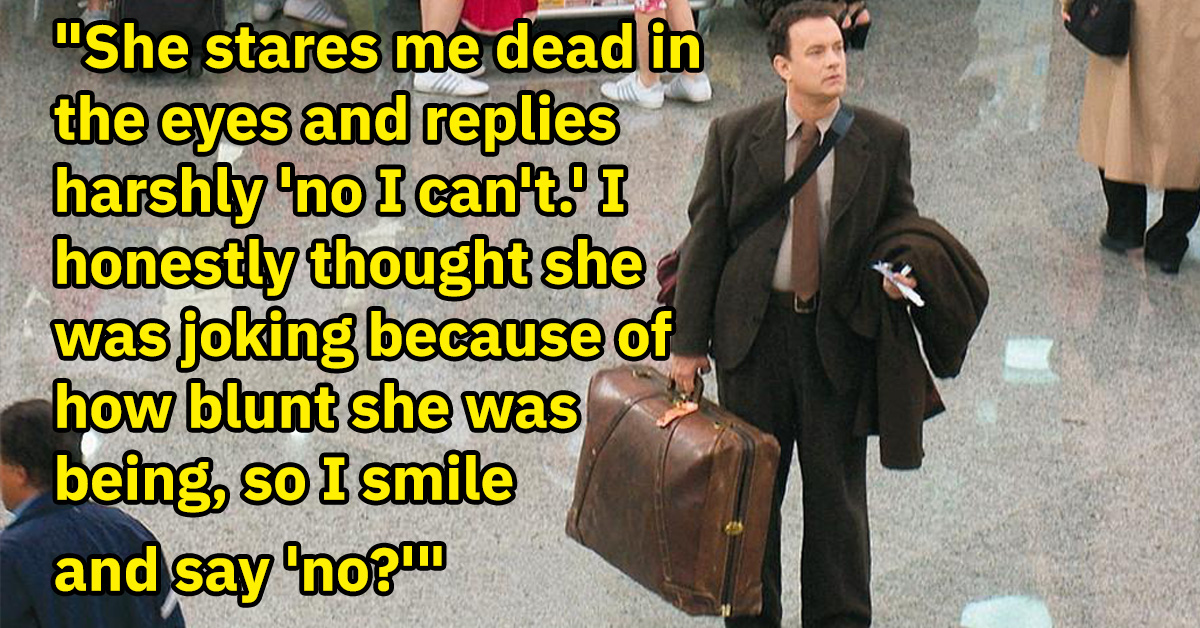 Airport security is pretty routine at this point. Unless you seldom travel, the rules are pretty much common knowledge and understood by everyone.

For example, if someone asked you to watch their bags, even for a minute, would you say yes? I know I wouldn’t, so when this Redditor was shut down after asking a random stranger to watch his bags, he shouldn’t have been surprised.

One Redditor asked a stranger at an airport to watch his bag for a few moments, and the person said no.

After the altercation, he turned to the popular subreddit “Am I The A**hole?” (AITA) to find out if he was wrong for even asking the woman to watch her bags in the first place.

Here’s What They Said:

AITA for asking a small favor from a stranger at the airport?

I (29M) am at the airport (small, Midwest US, domestic terminal). There’s literally no one else at this gate (or basically in the whole airport) beside me and this lady with her son. I REALLY need to use the restroom since I was a bit late getting out of the hotel this AM and my bags are a bit disorganized from the security checkpoint, plus I’m holding a coffee and sandwich I just bought. Bathrooms are right next to the gate we’re sitting at – no more than 50 feet away.

Now, before I go further with this, note that I’m a pretty experienced traveler as I lived abroad for a few years in several places. I usually NEVER do this since I’ve found most people want to be left alone at the airport, but I ask politely if the woman can just keep an eye on my bag (I’m sitting right in front of her) while I go to the restroom – at this point, I’m about to pee my pants and I can’t take a second to arrange everything to bring to the restroom with me. She stares me dead in the eyes and replies harshly “no I can’t.” I honestly thought she was joking because of how blunt she was being, so I smile and say “no?”

She snaps at me and goes “absolutely not – are you kidding me? Can’t you see I have enough going on here? No I can’t watch your bags,” sighing after muttering the last word and looking away. I apologized for bothering her and bringing all my stuff in disarray to the restroom with me. Am I the asshole for even asking? 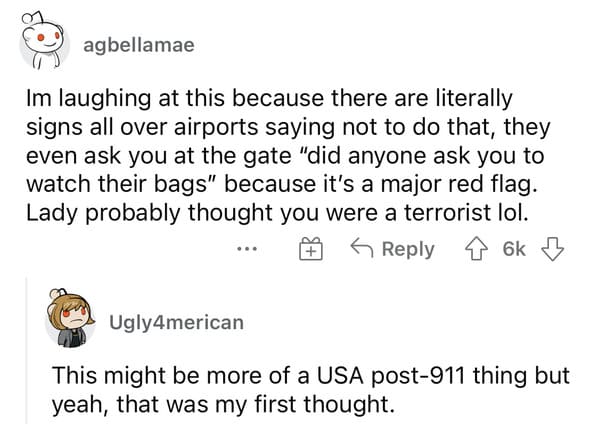 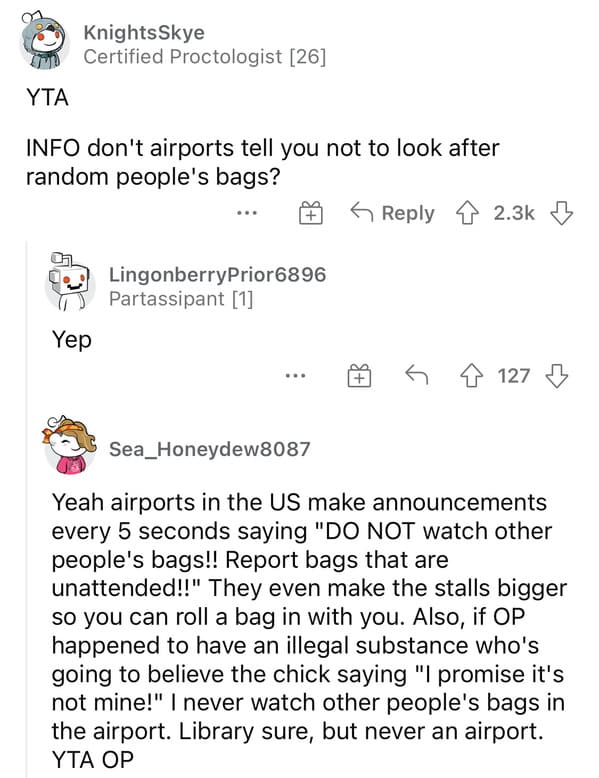 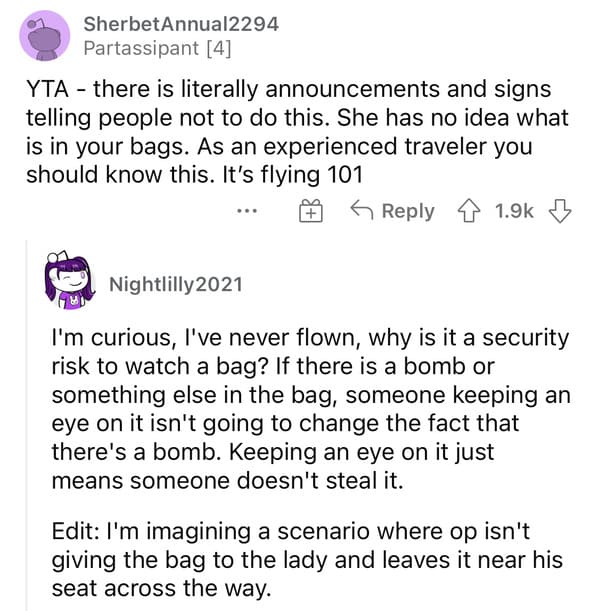 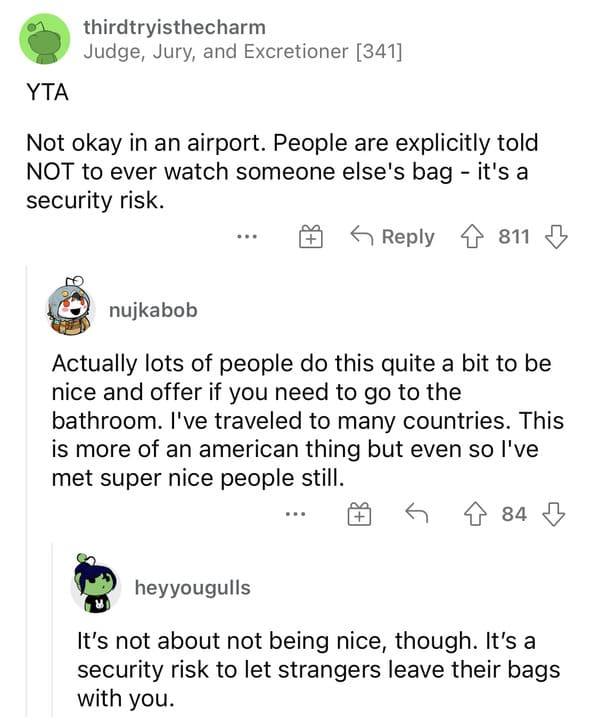 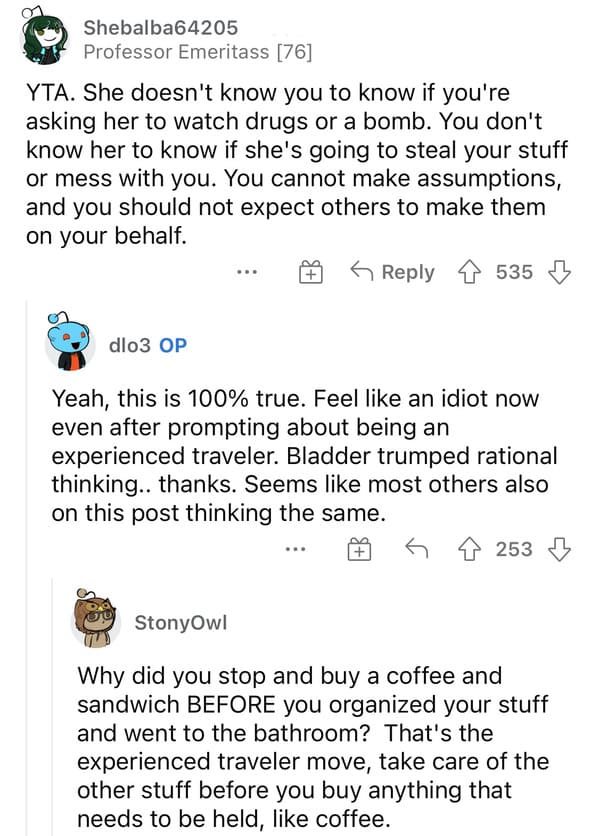 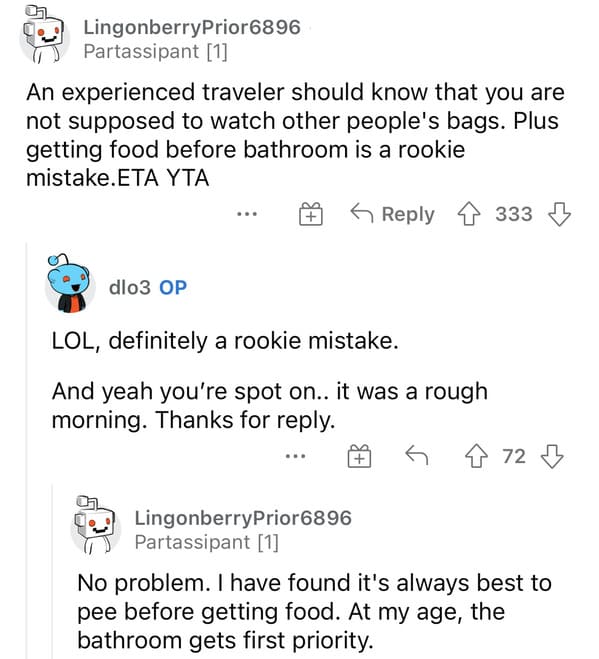 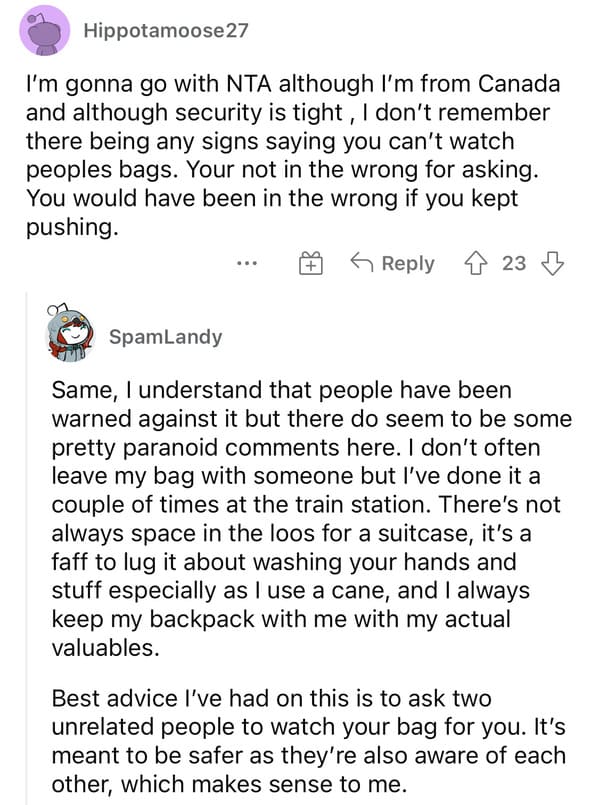 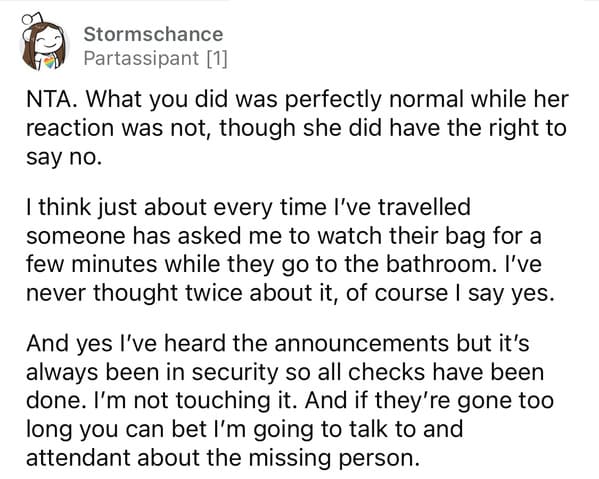 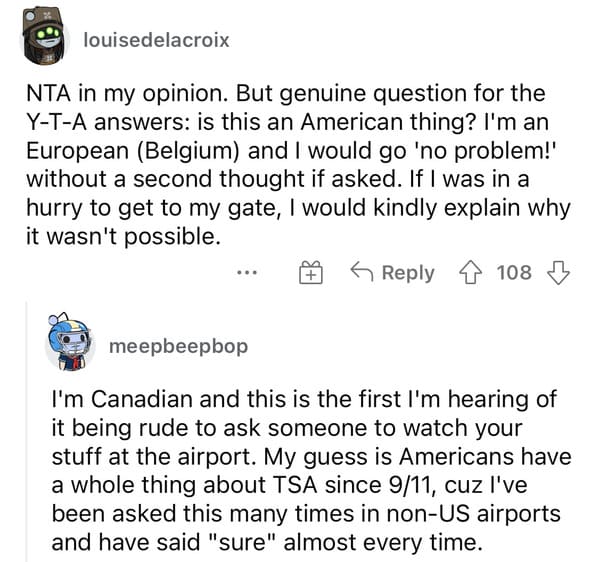 After Reading Comments And Replies From Fellow Redditors, OP Updated Everyone In Their Original Post

After reading all your input, would just like to say it’s quite clear IATA.

⁠Should have just used the restroom at the hotel.

⁠Should have just taken 90 seconds to consolidate electronics and carry-on.

⁠Don’t grab a coffee and a bagel – go to the fucking bathroom first.

⁠Should not have asked someone to watch my bags, regardless of how few people were around, regardless of personal needs, and regardless of how close the bathrooms were. All irrelevant for several obviously stated reasons. Creepy, dangerous, and also stupid on my part – she’s also a stranger who could easily walk off with all my stuff.

⁠Should DEFINITELY not have assumed she was joking by saying “no.” This is honestly the part I’m most ashamed of since although it wasn’t at the time, it’s the most transparent situation there could possibly be. I’m a total stranger asking her and her kid to watch a soccer duffle bag and laptop case in an empty airport. I can’t explain why I thought she was joking, I guess sometimes I have that sense of humor when a friend or family member asks something of me, I’ll say “Yeeeah no sorry I can’t do that” immediately followed up by a JK. Horrible horrible read on the situation by me.

While I originally thought her response was somewhat rude and blunt, looking back it’s quite obvious that she has every right to react the way she did. Plus she may have other stuff going on that I’m not aware of.

Series of several bad decisions in a few minutes. Not my proudest moment.

For those saying I’m not an experienced traveler – maybe I’m not. A better way to put it would have been “I have experience with air travel.” From the states originally, I lived abroad for 5 years in Europe making frequent trips to and from the US for both work and studies. Also traveled to Europe for work pretty often. Never once before have I asked someone to watch my bags. This was for sure a first and last.

Topping it off – I knew the woman and her child were on my flight. After getting situated I did a quick once-over glance up and down the aisle and notice, she was sitting behind me in one row and on the opposite side window. Awkward eye contact, I give an apologetic pathetic smile as if to say, “yeah sorry about earlier, that’s my fuck up.” I didn’t want to come off as creepy by verbally apologizing again to her, maybe I should have.. didn’t want to bother them more than I already did. If you end up reading this – I’m really sorry, again!

Thanks for all your replies.