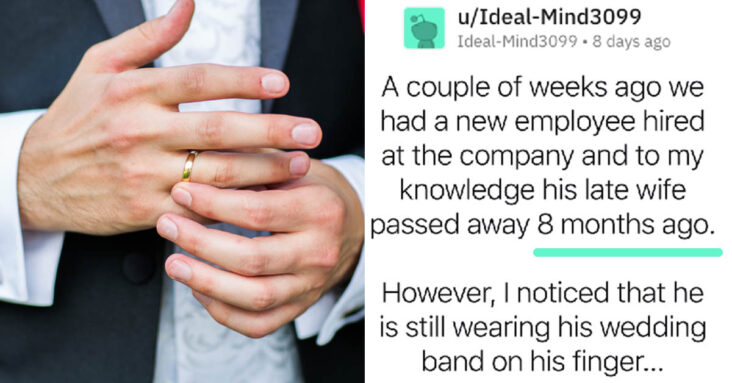 On the subreddit r/AmItheA–hole, there are sometimes posters who are so obviously and profoundly the A–hole, you have to wonder how they’ve made it this far in life without having all their teeth knocked out.

This woman posting under the handle u/Ideal-Mind3099 must have a good dentist because they are really pushing people’s limits.

The OP says that a few weeks ago, her company hired a 36-year-old man named James, whose wife passed away eight months ago. Less than a year. Not sure why she knows this, but they all do. She says that everyone gets along well with James.

“However I noticed that he is still wearing his wedding band on his finger,” she wrote. “It kind of confused me a bit and I couldn’t help but bring it up with him while on lunch break.”

Couldn’t you help it? Reader, she could, but she clearly didn’t want to. Here’s what happened:

We talked and I pointed out that he was being misleading by still wearing his wedding band when he’s a widower. He looked quite bothered by what I said but I tried to explain that I think that he was giving people the wrong idea or impression about his relationship status since he’s technically single and on his own right now (don’t want to sound cruel but I’m speaking from technical angle).

James said that he didn’t give it much thought (meaning he don’t care what people think) and that even if he wasn’t wearing his wedding band and some woman approached him he’d still turn them down since he’s obviously not interested.

For some reason things got awkward and everyone stopped eating and just stared at James and me. I told him I don’t know but that really really felt generally misleading of him as in making people think he is in a relationship (married) when he is not regardless of how he felt about being in a relationship.

He got upset, called me rude, and said that I repeatedly disrespected his marriage and his late wife’s memory with what I said then took his stuff and walked away. My co workers said regardless of who is right or wrong (though some said he overreacted) there was no reason for me to bring this up on the first place and cause a scene and make James upset with us like that now he’s not speaking to me and others who sided with me.

Well. A guy whose wife died less than a year ago is still wearing his wedding ring, and the OP thinks it’s his moral duty to let everyone know he technically doesn’t have a living partner. He owes it to them all, for some reason.

A bunch of commenters guess the reason was that the OP is into James and thinks he should start crushing on her instead of grieving his massive loss.

And a lot of them think James should contact HR.

There were even some actual widows and widowers weighing in and mentioning all the weird stuff people will say to you in grief.

We can all always hope this is fake because better a troll than this big of an a-hole.