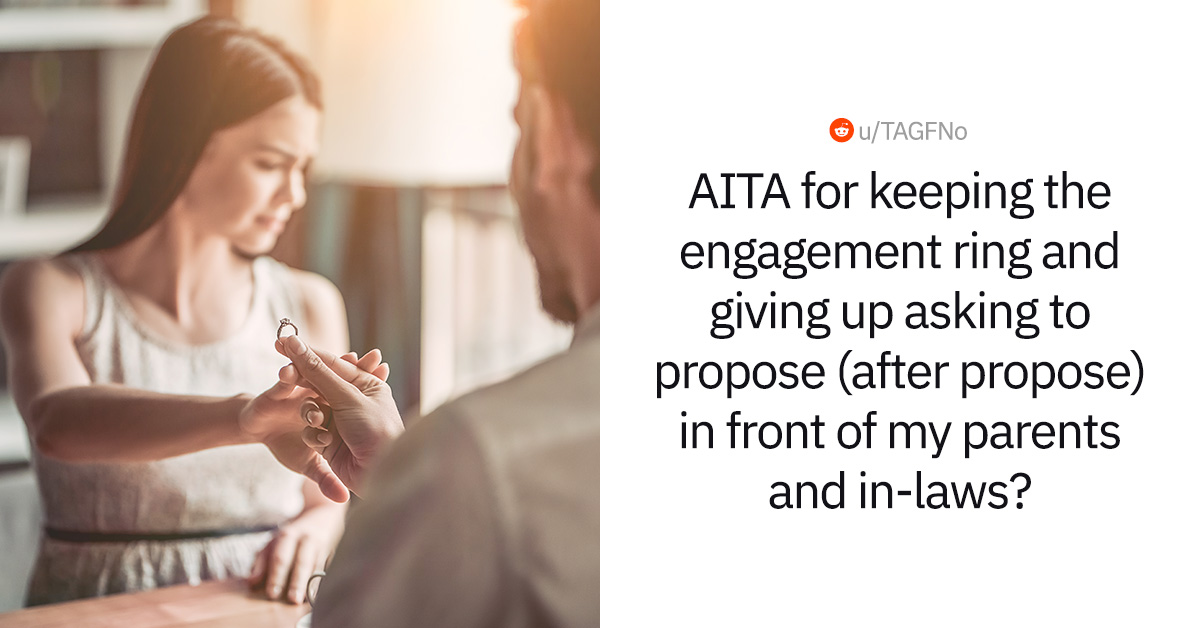 Proposing is one of the biggest moments of your life. You’re asking someone to spend the rest of their life with you. This is why it’s important that you’re sure they’re going to say yes.

One Redditor found herself in an unfortunate situation after her girlfriend jokingly said “no” to her proposal, but there’s much more to the story. Apparently, the couple has a silly inside joke that completely ruined the moment. This didn’t sit well with her though.

So now, she’s turned to the popular subreddit “Am I The A**hole?” (AITA) to find out if she was wrong for reacting the way she did. Here’s what she said:

AITA for keeping the engagement ring and giving up asking to propose (after propose) in front of my parents and in-laws?

My (25F) girlfriend, Molly (26F) for the last… 6 months started with a joke that I’ve already made clear that I don’t like. It consists of her saying “No” quickly to anything I ask.

I’ve already made it clear several times that I don’t like it, even more so in I LOVE YOU (she’s the only person I can say that, so it’s special to me). And there are things that are serious and I need her to answer seriously. And if she says no to everything jokingly, I can’t tell when she’s saying a real no (it’s already happened).

I keep saying this is boring and I don’t like it, she stops doing it and goes back to doing it after a week. After a brief discussion because she played this prank in front of our friends (Me asking “love, can you get me some medicine?” and she with No kidding), she stopped doing it for 1 month.

Yesterday, we welcomed my parents, in-laws and our 2 best friends to our house. Everyone knew that I was going to propose to her and I called them, because we always planned this proposal with our loved ones attending, participating in this special day.

I asked her to marry me and she said a quick NO and I was so grumpy/panic/upset (everyone looking in shock) for 30s for her to laugh and say she was joking, finally saying YES.

I was so embarrassed and…disappointed? I put the ring box back in and said I’d take it out to cool off. I didn’t even let her say anything.

She kept texting me (no answering calls), saying it was just a joke and that I knew she always did that. She said that I left an difficult situation in the house because it was very clear that I had given up on propose and did in front of my parents and in-laws. She stressed that I was making the situation uncomfortable because of a silly joke.

Well, I slept in a hotel and I’m still in it.

My parents supported me, but my in-laws calling me AH for giving up on proposing, disproportionately humiliating their daughter.

I just really think there’s time for jokes and that moment wasn’t clearly, she knew I didn’t like it and decided to do it anyway.

NTA why would you sign up for this permanently?

NTA – i used to have a boyfriend who did something similar. Everytime i wanted to talk about something serious like something that happened in the world, something that happened at work, something in our relationship, whatever it was – he would always with 1 Minute make a joke about the subject, trying to diffuse “the situation” (of me telling him about something i cared about/ thought about / made me feel sad etc).I asked him to stop 1000 times and he always said: its just him joking and i shouldnt take that serious.I explained to him that that behaviour made me feel like he takes nothing that concerns me serious, which he protested against and told me “i try to make him look like a bad BF”.

I tried doing it to him, to make him see how it feels and of course it would be a super drama because “i would not take him seriously and i dont care about him”. Yeah right.Eventually i lost all respect and ended the relationship after 2.5 years. I couldnt and wouldnt take him seriously and quite frankly the disrespect towards me was making me feel grossed out by him. Emotionally and physically. Of course he complained, “did not see this coming”, “why did i never say anything?” etc.

NTA and seriously: Overthink this whole relationship. GF will not change. GF does not respect your boundaries and feelings.
She has shown you who she is, believe her. Move on and find someone who does!

Your girlfriend just learned a much-needed lesson on why you don’t joke and say no when you mean yes.

And you are not making the situation uncomfortable because of a “silly joke” — SHE is.

She knew you don’t like it (and honestly, who would? That would annoy the fuck out of most people) but she did it anyway. What next? Is she going to jokingly say no during your ceremony?

Out of all the things that are wrong from her side, one that stands out to me the most is that afterward she still puts the blame on you and does not even apologize. If you see that your partner is hurt by something you did (yes, even a joke) any well-adjusted human being would apologize.

Also, if other people are not laughing, I wouldn’t even call it a joke. And you are correct to think that there is time and place for jokes. I can imagine how hurtful and embarrassing it was to hear the ”no” to your proposal in front of your family. Such a dick move.

NTA, and this is coming from a family who does it A LOT. Me and my siblings love to be like “Can you grab me a drink when you go past?” with a quick “Nope” only to do it anyway with all the variations. The sibling or our mom (who loves to do this with us as well) usually just say “Oh, okay!” Cause we know the joke.

Here’s the thing, we DON’T do the joke with our dad. While the rest of us finds it funny, he is quick to feel upset and not understand when our ‘No’ is joking like you do, so we DON’T DO IT. We don’t do it because we love and respect him and know it can be quickly upsetting to him, and he loves other pranks/jokes with us so we just find other things to share the fun in with him. I would also like to add we never do it in serious situations or things that need an actual answer or conversation, there are times and places for these things which she is NOT understanding.

This is not about you ‘taking it too seriously’ or anything else, if she truly loved and respected you, she would stop. It’s simple to remember and do as someone who has almost their entire immediate family doing it on a daily basis, who also remember and don’t do it for one of them out of love and respect. I have to stress that because that is the huge issue here and she needs to work on what she is willing to compromise on if she ever wants to have a life with you with BOTH of you happy.

I wish you the best and I hope she either wakes up and realizes she is completely in the wrong here, or you find someone who is willing to do that for you.

NTA, you are right and keep your boundary here.

NTA. I am sorry this happened to you and I don’t think you’re overreacting. A joke is a joke only if all involved people are laughing and you made it clear months ago that you didn’t find it funny. The first question one should always ask if “why this particular joke”, especially if someone claims they cannot stop it. So maybe your girlfriend (not fiancée) should take a look at herself and ask herself that question, especially if she couldn’t even manage it in a more serious and emotional situation. I would hold off on proposing until you both get that cleared up (also, since saying “no” to I love you is veeeery strange, it’s not even a request by you?)

NTA. I’d take NO for an answer if I were you.

NTA. You have repeatedly told her that you don’t enjoy this joke especially in serious or romantic contacts, then when it was time for the most serious and most romantic moment she whips it right out. The only person that was making the situation uncomfortable and humiliating was her. You asked something very clear and direct and she fucked it up hard.

NTA. You made yourself clear. She’s acting like a child. Marriage proposals aren’t for children. She may have saved you the cost of a divorce later though.

NTA and the in-laws need to step off. You humiliated her? Uhm, no. She humiliated you on instinct because apparently she thinks she’s hilarious when she isn’t.

I’d be so upset if I were you and honestly I don’t know how you’ve put up with 6 months of no’s as an automatic response. That would really shut me down.