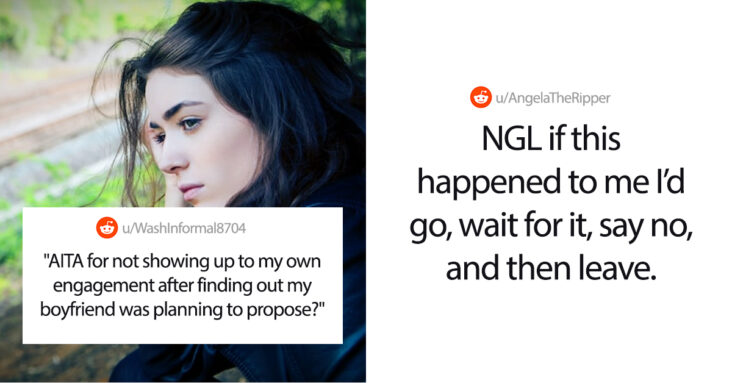 Most women fantasize about their proposal day and how special it will be. Some women, however, dread the usually-public event and will even go so far as to ditch it entirely. It’s one thing to propose in front of a bunch of strangers, but a private venue containing 75 of your closest friends and family would normally be considered a heart-warming event that one would remember for a life-time. Well recently, one Redditor, u/WashInformal8704 went through this exact situation, and decided she would rather run away than endure such a ‘horrible’ event. She fled to the “AITA?” community to see if she was in the wrong for what she did. Below, you can find the full story in context, and read some of the top comments!

OP asked: “AITA for not showing up to my own engagement after finding out my boyfriend was planning to propose?”

I (28f) have known for a while that bf (38m) was going to propose. We’ve been talking about marriage, rings etc for a while. I didn’t know the when or where, but I thought I knew the HOW. This is because I’ve made it clear that I would absolutely hate a public proposal. The very idea gives me hives and makes me queasy with anxiety. It’s a personal preference/comfort-zone thing and not an opinion on other people’s proposals. There have been a few times when I thought he was going to ask, but I was wrong each time (wasn’t too disappointed because I knew it’d come eventually).

The night of the conflict was my birthday last week. We were going out to celebrate and he’d even given me my gift early to wear to dinner, since it was the first time we’d be going out for my birthday since pre-Covid.

We were meant to meet at the restaurant, but my dad called before I left, asking if our big announcement tonight was baby-related, and if so he’d like to congratulate me in advance in case he didn’t make it due to a travel delay. A few minutes into the call, I put two and two together, and immediately called my best friend who reluctantly confirmed my fears. She hadn’t wanted to spoil bf’s surprise but she also tried her best to convince him to scale it down because she knew I wouldn’t like what he’d planned. At this point, I was very late and my bf had been texting, saying that I was going to make us lose our reservation. I called him and asked directly if he was planning a public proposal. He couldn’t deny it, and after he told me he’d reserved the entire restaurant for 75 people, I told him that this wasn’t what I wanted, and that I’d be happy to attend, but only if he promised not to do it in front of everyone there. He said he’d told some people, and that word got around and they were now expecting a proposal, so he was going to do it otherwise we would’ve wasted everyone’s time and money coordinating and getting them down there. I said that if he insisted on doing this in a way which made me uncomfortable, I wouldn’t be coming at all. I hung up at that point and stopped answering because I was hurt.

He’s livid, and we’ve been fighting all week cause I embarrassed him in front of our friends and family by not showing up. He says I’m making a big deal of it when we both know I would have said yes, and that I’m being ungrateful because any other woman would kill for a bf who would go through the trouble to make a grand gesture. While I agree that I had every intention of saying yes when I knew it was coming, I don’t like being put on the spot or being made to feel obligated to say yes because of an audience.

He said he won’t consider proposing again until I apologize for embarrassing him and promise to chill out about my preferences in the future. I don’t feel like I should because he knew I would have preferred something more intimate and romantic.

TL:DR Bf planned a public proposal against my wishes, and I skipped it when I found out, embarrassing him- AITA?

Her anxiety-driven perspective is definitely understandable. Perhaps her boyfriend could have heeded her wishes and done a more private proposal, even if it was in a back room somewhere at the restaurant. Alas, he desperately seemed to want the publicity that the event would bring, and left his soon-to-be fiance in a very awkward spot over a very material thing.