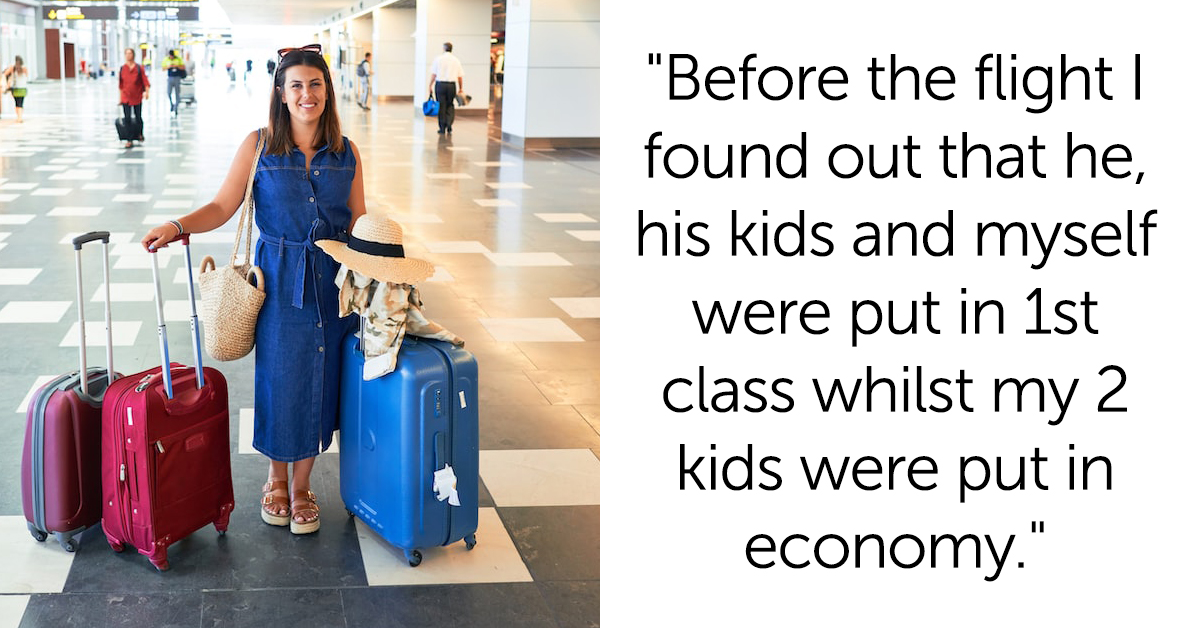 This story has enough twists that I’m not ready to call it based on the title or first paragraph alone, so you’re going to have to join me.

Redditor u/thethrowaway156 took to AITA over on Reddit to ask if she was wrong “for not getting on a flight upon finding out that he put my kids in economy?”

Her fiancé has three kids and she has two, both from former marriages. The fiancé is the breadwinner while OP gets a degree.

I quit my job to start focusing on getting my degree. He’s become the “breadwinner” if you will although I still contribute with my savings! I also do 80% of child-care and chores.

The fiance wanted to take OP and her kids to Thanksgiving with his family and the trip was scheduled to start this week. OP learned he put his kids, OP, and himself in first class; her kids were put in coach.

Long story short, He wanted me and my kids to attend thanksgiving with his family who are located across country and we were supposed to go yesterday (ahead of time to get a rental place). He booked our tickets and everything but later, before the flight I found out that he, his kids and myself were put in 1st class whilst my 2 kids (14) & (10) were put in economy.

OP’s fiancé said it was no big deal, OP was furious, so she took the kids and left the airport.

I was stunned, he acted like it was a no big deal and told us it’s just few hours and the kids could “just hang in there for a little while”. I asked how he could think this was acceptable and he got mad and said he’s the one paying for tickets then we go by his rules. I immediately turned around and took the kids and made my way out of the airport. He started following us screaming at me to go back but I refused and told him that I no longer felt like spending thanksgiving with his folks after this. My youngest cried because she never flew without me.

He and his kids went to Thanksgiving; OP and her children are home. This guy has kept calling her to yell at her and even his mother is berating OP.

He went with his kids. My and the kids are home. He has not stop calling trying to berate me and even had his mom text that I needed to get over myself and stop teaching my kids to be spoiled and entitled. She said that the fact that I was “willing” to miss thanksgiving with the family over something so trivial shows my real character and perseonality and mindset or “lack thereof”. I have not replied but I feel horrible.

OP is now not sure if she was wrong.

AITA, should I have just let it slide and just went? In case I wasn’t clear, ME AND THE KIDS LEFT OUR FAMILY/HOMETOWN SO WE COULD GO CELEBRATE WITH HIS FAMILY IN HIS HOMETOWN. My kids weren’t too excited leaving their granparents for a week or so.

She also posted an update — she’s leaving this guy. Apparently this kind of thing has happened before and she finally realized she cannot minimize her children being hurt.

UPDATE I’m currently getting myself and the kids packed so that we go stay with my mother. This has happened BEFORE in other instances but I kept thinking to myself “this is not right but I have invested too much time and effort in this relationship so maybe this shouldn’t get in the way”..and I’d try to minimize most situations where I find my kids being put last. Not only that but he tried to give me an ultimatum regarding getting my degree and what was my response? “This isn’t right….” but kept making light of it and letting go. Now he’s probably badmouthing me to the whole family (and so is his mom, bless her effing heart)

OP plans to be gone by the time he comes home from Thanksgiving.

The kids and I are leaving, He’ll be coming back to an empty home…except he’ll find some company with the engagement ring that I took off and left on the nightstand. Distance and some re-evaluation is needed right now. Thank ypu to all who reached out with helpful input and prespectives. You’re right, my kids come first and that’s what I keep trying to do and I hope I won’t ever fail. Thank you so much for the support.

So what did Reddit say to get this woman to see reason? Let’s check out some replies.

“NTA. His kids in first class, your kids in economy? That’s a bad sign for the future. Then his response is to berate you and future MIL calling your kids spoiled and entitled? Even worse. It would not have ended here. I would be done with that relationship,” wrote one reader.