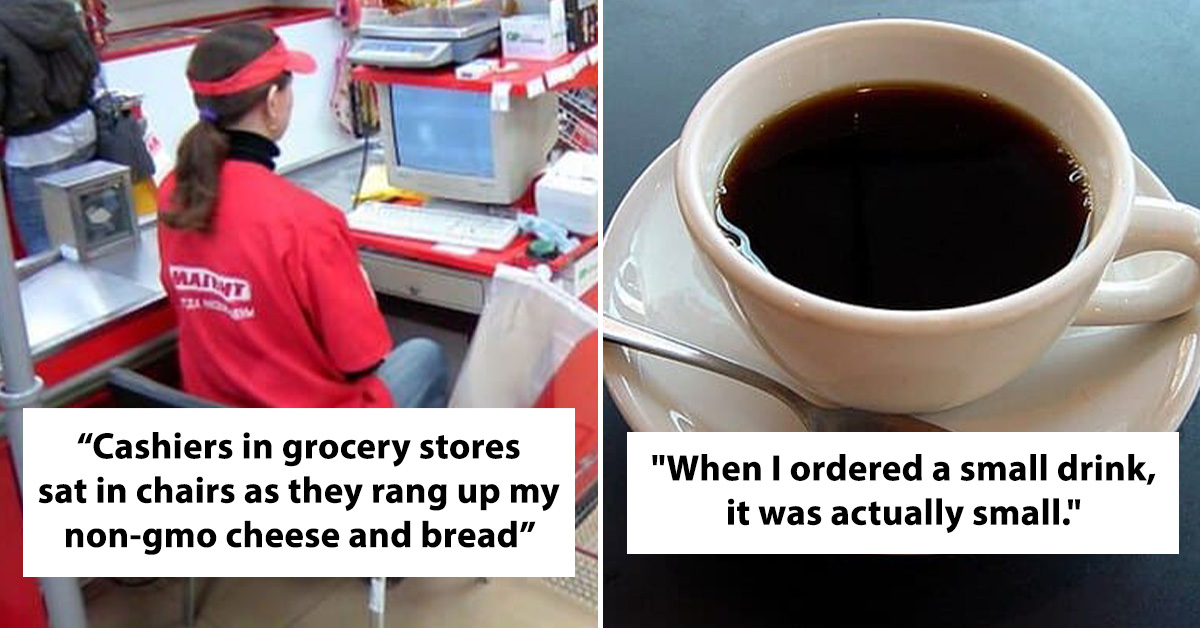 Traveling abroad can be an eye-opening experience. It’s good to experience different cultures and see how they live. I think it makes us better at understanding people, especially from other countries. Also, it’s just fun! America has plenty of cool stuff to offer, but there’s the whole rest of the world too. Folks who’ve made the trek are sharing the biggest culture shocks they’ve experienced while traveling in this AskReddit thread.

I went to Europe I drank all the booze, ate all the food Stayed 2 months, and lost 20 pounds

The amount of casual nudity on TV. I had to chuckle at all the naked breasts frequently visible. Europeans are just healthier in their views of sexuality and nudity. We Americans are ridiculous prudes by comparison.

Oh and Belgian chocolate is better than sex. Often.

The age of all the buildings. Walked into a pub in the UK with a plaque that read something like “This building was constructed in the year 2 and was used by monks to fend off dinosaurs”. Maybe not the exact words, but you get it.

Cashiers in grocery stores sat in chairs as they rang up my yummy non-gmo cheese and bread. They also didn’t feel any job pressure to chat or smile or act like your best friend. They just worked and DGAF. It was amazing!

I was surprised at how much walking I did. I did it because it was easy, not because I had to.

Apparently you can get hurt and not go into debt

How much better all the food was. Everything was fresh, made from minimal ingredients, and most of it was grown locally. (Going from US to France) I also lost about 15 pounds even though I stopped exercising in a gym. Also my skin and hair looked better than ever. I think preservatives and high fructose corn syrup might actually be bad for you.

That tax was included on the price tag.

First time in Spain… 22:30… Sun still out… parents sitting, drinking, relaxing while kids run up n down… felt so completely safe and comfortable.

Holidays. Europeans get so much paid time off. I’ve gotten into arguments with some of my American friends because they legitimately believe tons of Europeans opt out of taking their PTO because there’s so much work to do. I don’t buy that. People would riot. Anywhere I went in late July-August, there were tons of shops closed cause people were spending the month with their families enjoying their time off.

That and public bathroom stalls going all the way down to the floor. Y’all understand privacy.

I was not ready for how many overwhelmingly beautiful ancient buildings and cities I saw in only two weeks. I actually couldn’t fathom what I was looking at. It was a surreal experience like I was really in touch with a completely different era of humanity. There is absolutely nothing like this in America. It blew me away and made me really care much more about European history, urban planning, and architecture!

When I ordered a small drink, it was actually small.

I heard a story of a lady who was dumbfounded that there weren’t going to be fire works celebrating the 4th of July. Couldn’t conceive the idea that other countries don’t celebrate America’s independence day

I went to Scotland. Ran across some German tourist who asked us to translate what the scot was saying. We were all three speaking English. They just couldn’t understand each other

I was in Switzerland for a few days. I felt like the fattest person in the country at 6’0”, 210 lb. It was also amazing to me that it felt like two different countries going from Geneva to Zurich. The language went from French to German with the architecture completely different between the two cities. Absolutely beautiful country.

History. I followed a tour of American tourists into the church in downtown. Question gets asked: Is this the oldest church in town? Heard reply:

(Chuckle) Oh no, the old church is on the North side of the river. This church was built in 1310.

Just a different perspective on history.

People drink literally at any chance they get.

The vegetables are exponentially smaller, bc theyre not genetically modified.

They are hardcore about recycling out here.

The bank is never f*cking open.

Ground floor is not the first floor. Its the 0 floor.

How old a lot of the cities are. People still living in buildings older than the U.S. Walking down some of the old streets feels like you’re time traveling into a medieval fairytale.

For me, it was how well I was taken care of as an artist. In America, a musician is treated like help at the bar. You’re paid whatever the minimum amount they can possibly give you is. You might get 2-4 drink tickets. In Europe they respected you, fed you, found you places to sleep. Free drinks. Enough said.

You hear about how big the Roman empire was and all the advanced building tech they had. But it doesn’t really sink in until you see it with your own eyes.

This may sound weird, but how much they ate. Americans are the fat ones who eat too much so the stereotype goes but I took a semester in rural Germany in middle school— breakfast, morning break snack, lunch, afternoon break snack, snacks in town after school let out, dinner when you got home and occasionally this late night meal when my host parents got home, etc. Don’t get me wrong, all of it was more fresh and 10x better than the literal plastic Americans think is OK to eat on a normal basis, but I was constantly full for like the first week because I was too awkward not to eat the snacks my host mom had packed. Eventually ended up refusing things, and my host sister thought I was sick because I wasn’t eating every time the group was or something. Ironically I actually lost weight during the trip, probably because the food is just generally better for you. We did live on a farm too so it was insanely fresh.

In France people get two hour lunches. Like some stores will have two separate open and close times cause they’ll just shut down for two hours a day to enjoy themselves. Most people seemed much happier and relaxed as a whole.

I’m Dutch, but I’ll never forget my American girlfriend’s reaction to seeing rows and rows of parked bicycles in front of the train station when she came to visit the Netherlands. “Oh my God look at all those bikes!!”

The distinct lack of “People of Walmart”

Not a shock per se, but something of an immediate reorienting of perspective in terms of history and how young the US really is. We have cool historical sites and artifacts, but it’s weird to suddenly be confronted with the reality that for as historical as Ben Franklin and the liberty bell were/are, they’re borderline infantile on a global historical scale.

I especially remember being at a church in Italy, reading about its history and initially felt a bit deflated when a sentence began “this is not the original church, the original burned down and was rebuilt on the same site…” and thinking ah bummer, so this is the knockoff replica, not the real thing— and then getting to the end of the sentence “…in the 12th century.” The “knockoff replica” is 600 years older than the Liberty Bell.

I’ve lived in Europe for most of the last 20 years…when I first moved here the main things were:

The fact that sometimes when you go to the doctor they basically just tell you, “yeah, you’re sick. You need to go home, drink lots of fluids, and rest.” In the US it seemed like regardless of what the ailment was you were gonna get a prescription for something.

In my experience, people here communicate much more directly and if you are not used to it, it might seem rude.

The lack of a copay for things like doctor’s visits, physical therapy, etc. along with a price cap on prescription drugs.

The attitude toward customer service. “back home” in the US I was a customer service manager at a retail chain in college. The standard practice was that if someone complained, regardless of how ridiculous the complaint was, we just gave them a coupon for 10% off or something. Here, if you are unhappy with the service at a store and ask to speak to the manager, the manager is probably just going to tell you to “go shop somewhere else if you don’t like it here.”

Complete privacy when taking a dump in a public restroom. It was hard to come back home just from that.

The amount of public transportation and in many places people not driving or not even knowing how to drive.