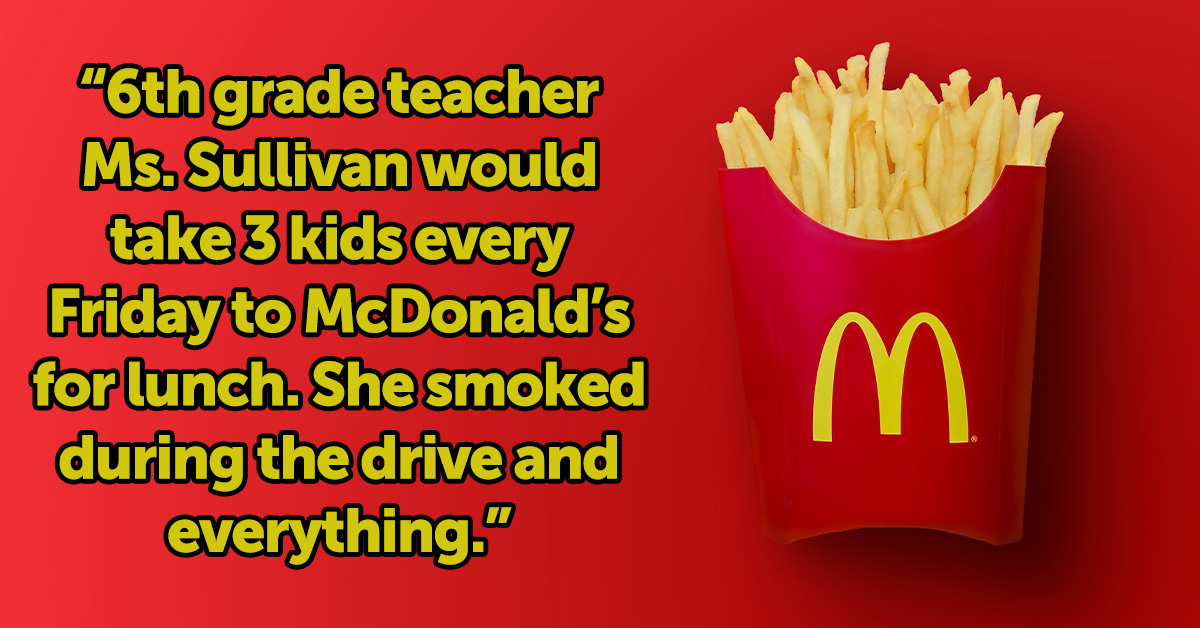 Times have changed over the last 40 years. I’d argue that most of the changes have been for the better.

Take school for example. Teachers used to get away with a lot more than they could today. Nowadays, things like corporal punishment sound crazy, but it was the norm at one time.

Redditor u/theSandwichSister asked the internet to share examples of things that teachers couldn’t get away with today compared to when they grew up and here’s how people responded.

80s/90s Kids: What’s something a school teacher did to you that would not fly today?

6th grade teacher Ms. Sullivan would take 3 kids every Friday to McDonald’s for lunch. She was cool as hell. Smoked during the drive and everything. — u/SigP365SAS

In high school we would sometimes play knee soccer which was in our wrestling room(wall to wall wrestling mats) and was really just handball but on our knees.The PE teacher(football coach) let us play rough since it was an all male class and we were on our knees and couldn’t do too much damage. During the game two of the students were grappling for the ball and as these things go, one of them accidentally knocked the other a little too aggressively. The kid that got hit(an known asshole of the school) got pissed and stood up and kicked the other kid. The PE teacher (225lb jacked military hair cut) stormed over and shoved the kid who flew about 10 feet before crashing to the ground. The kid gets up ready to fight whoever shoved him and the teacher had closed the gap and started screaming at him. Then the teacher lectured the entire class about sportsmanship and honor. The teacher never got in any trouble. — u/hanginonwith2fingers

It was my first grade. I shook the ruler in my hand, and the teacher took my ruler and hit me with it causing my nose to bleed. A few years later I found out that she also had been working as a school psychologist. — u/Arkhidexx

English teacher in high school used to cuss kids out for being noisy in class and if that didn’t work, he’d throw the blackboard eraser at us. I wasn’t on the receiving end of the eraser. That chalk would leave marks on kid’s backs for the rest of the day so everyone knew who pissed off Mr. Charvet. — u/Roscoe_cracks_corn

My elementary school teacher used to say to kids “you’re cruising for a bruising” and once washed out my friend Jermaine’s mouth out with soap. This was circa 1987. — u/chefboyardeejr

My high school Study Skills teacher used to A. Throw your bookbag over the railing outside the class to the first floor below if you fell asleep B. Threw chalkboard erasers at you if you were caught talking during his lectures C. Got a megaphone in your ear if you fell asleep and didn’t notice your bookbag tossed. Funny thing is, Mr Stuart was somehow one of the most liked teachers in school. Circa 1997. — u/chefboyardeejr

Punishments in my elementary school: Standing with nose in the corner. Bending over and touching toes for a long time.

Paddling with a thick wood paddle from the principal. Knuckles rapped with a ruler.

Edit: I forgot one. Long white cloth banner with “tattletale” emblazoned vertically that was pinned to the back of the shirt and worn for the duration of day — u/Ornery_Tackle_767

One of the kindest, most well-liked teachers in my high school was a gay man named Mr. McCreary. One day after school,he walked by a group of us, and the health teacher/wrestling coach says “there goes Mr. McQUEERy!!!” Even back then, we all just kind of looked at him blankly. — u/Plug_5

We had a math teacher at my school that all of the girls would complain about him randomly rubbing their shoulders while they were trying to work. I never had him but everyone who did would confirm. It was always like a joke and people would laugh about how “creepy” he was, but nobody made a big deal out of it for some reason. I wonder if he still works there. — u/Viiibrations

When I was in first grade, I asked to use the bathroom during recess. My teacher said no, I just had lunch and could’ve used it then (when I didn’t have to go). So I pooped my pants behind a tree and had to go through the embarrassing aftermath during nap time. — u/theSandwichSister

I told my biology teacher that I wasn’t feeling too well, he said that I didn’t look sick, and as punishment made me stand in the corner until I fainted. — u/AustrianReaper

Not a teacher, but a school one. If you read enough books during the year in elementary school you got to have a sleepover in the library. Like we brought sleeping bags and slept on the floor. In the morning they had griddles out and we made pancakes. I know, total nerds, but it was my favorite elementary school memory. — u/7askingforafriend

Birthday whacks from the teacher. As odd as it sounds, the teacher would 100% get fired for doing that. Even though she never touched me, it just seemed normal and this was in like the mid-90s. — u/jarrettbrown

My fifth grade gym teacher made me do pushups in front of the class. I was overweight, so I couldn’t do any. Then she’d say “this is what happens if you eat too much food.” There were other, even heavier kids in class, but she never chose them for this activity; just me.

In 5th grade, I was called to the office at my public school. I was a goody-two-shoes so I had no idea why I was called, so I started tearing up thinking something bad must’ve happened to my family.

Eventually, I was ushered into a room as my two best friends left. The principal and 2 other staff members then sat me down and showed me a piece of paper. It was a silly poem I wrote one of my friends about a good witch who granted wishes by mixing together some mundane ingredients. Apparently, their mother found the poem and complained to the school. Their response was to interview my friends about MY RELIGION.

They asked stuff like if I drew any “weird symbols” and one friend said yes because I always drew the school symbol for Balamb Garden (Final Fantasy 8) on my notebooks. So by the time they got to ME, they were basically trying to get me to admit to practicing witchcraft at school. PUBLIC SCHOOL. Which I was not. I was a church every Sunday Christian and knew nothing of actual witchcraft (not that it should matter), but they said they could tell BY MY TEARS that I knew I did something wrong. They put me in detention for the day in the principal’s office and NEVER INFORMED MY PARENTS.

Ironically, the year prior, I had drawn an angel in art class during some fundraising event where you could get your kids’ art put on merchandise. Right next to me on a file cabinet was a magnet of my angel drawing that the principal who put me in witchcraft jail had bought for herself. Lol

My elementary school principal would pull loose teeth. You could go to his office, have him pull your loose tooth and he would give you a lollipop.

So my mom was…maybe not the most observant. I love her to pieces but….yeah. When I was ten, the neighbor’s dog bit me, grabbed and shook my hand, really bad. I went home and told my mom, who was like ‘oh, it’s fine, let’s clean up those puncture wounds, no big deal. Don’t tell Dad’ (my dad was a cop and a mandated reporter – we literally just didn’t want the dog to be in trouble it had never happened before and that poor baby was so sorry. Turned out he had an ear infection and when I went to scratch his head like I’d done a million times before, it hurt him. The neighbor forgot to tell me his ear hurt it wasn’t his fault at all.)

The next day was Monday, and I tried to tell mom that my hand was bad- really bad. She said I still had to go to school and man. When Mrs. Messenger, my fifth-grade teacher saw me, she flipped her shit. She was so upset she was gonna call my mom and give her what for and on and on, and I was like “oh shit, I’m in big trouble now!” She marched me down to the office and I sat near the school secretary while she went into the principal’s office and rained all manner of holy hellfire and brimstone on my mom’s head. Screamed bloody murder at her. She came and picked me up and took me to get an X-Ray. I had six broken bones in my hand. Oops.

Can’t even see a teacher raising their voice in an email nowadays. That lady saved my pitching hand. — u/MamaBella

My fourth grade teacher was a softball player in her younger years. When you weren’t paying attention she’d hurl a stick of chalk at you. She rarely missed. She was awesome too. — u/optimaloutcome

8th grade science teacher calls a kid to the front of the room for some minor infraction, have him bend over, then kick him in the ass. However…. however, the student stepped out of the way just in time, and the teacher kicked the blackboard’s chalk tray, sending chalk flying everywhere. The humiliation was on the other foot then as the teacher chased the kid around the room a few laps. Fucking chaos. — u/DLiltsadwj