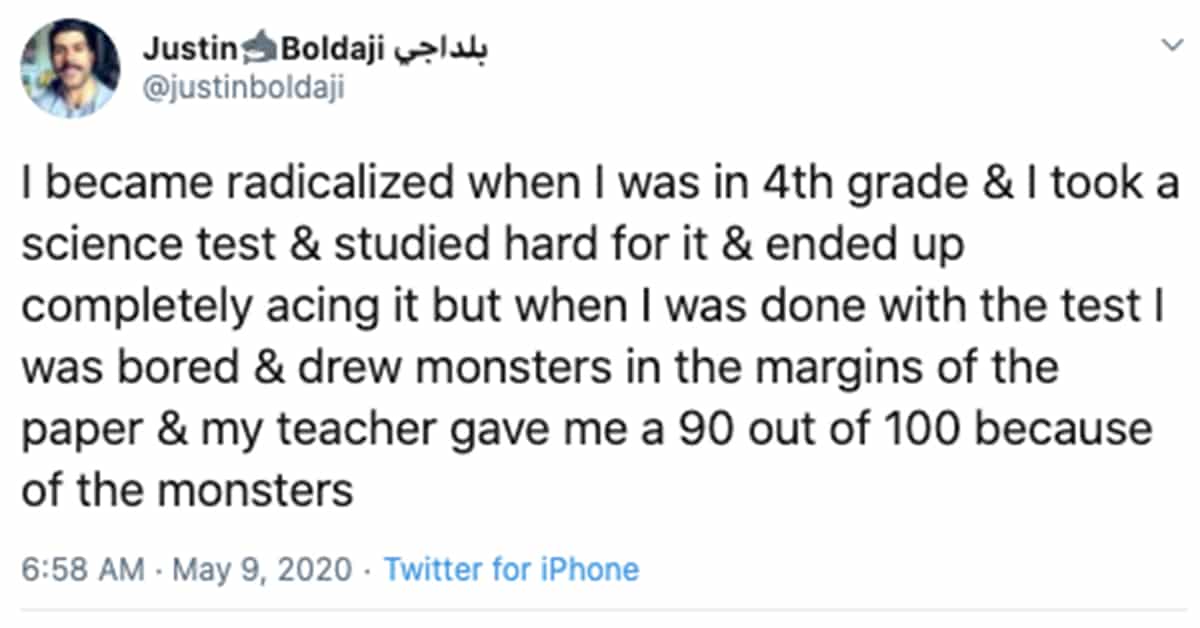 There are a lot of wonderful teachers out there who generally care about children and learning. But as many people are discovering during the pandemic, there are also a lot of bad teachers who are basically just employed to give your kids busy work all day so you can go to work. The latter type of teacher can get real bitter, real fast. That means the classroom becomes a scary place, with an authoritarian bully at the helm, ready to lash out at any child who still feels joy and wonder.

Twitter user Justin Boldaji was just such a child, until they realized in the fourth grade that working hard and doing your best isn’t as important as following the rules to the exact letter. Justin says that after finishing a science test, they doodled in the margins. All the answers were correct, but the teacher still docked points because of the drawings.

That’s all it took to radicalize Justin against authority. In fact, Justin is so radicalized that they tweeted this:

Not gonna lie, that’s a lot for me. But after reading all the petty little things teachers did to make inventive, creative kids miserable in class, I might be coming around. Here are all the moments in school that made people understand that following the rules isn’t the same thing as doing the right thing.

You could say I deserved it for not following directions, but you could also argue that the point of school should not be punishing people for thinking outside of the box

This makes me think of my 8th grade English teacher who would NEVER give a 100 on essays because she “didn’t believe in the perfect paper”. She gave me a 95 once bc the words weren’t close enough to the margin

In second grade I took a math test, and instead of the normal 7, I wrote the kind that has the small horizontal line intersecting the vertical, cause I’d seen it in a book and liked it. The teacher marked each answer with such a 7 as wrong.

My mom, who taught HS math (and was why I knew what negative numbers were) told me some teachers are just not very good and to take it as a life lesson

— an anthropomorphic guillotine, hungry and waiting (@Queen_Antifa) May 9, 2020

My 4th grade teacher wouldn’t let me sit in the front row even though my parents explained my disability to her and I had said I can’t see the board. She told me to get better glasses and treated me like I was stupid (made me read at a 2nd grade level even tho I was at a 7th).

This literally does not make sense. I also had teachers that would punish me for working ahead. Like, the point of school is to learn, yes? And people learn at different paces? Why would you punish them either for learning too fast or too slowly? We have to be robots?

I also remember fighting my high school’s personnel board for weeks, after working really hard for almost a month on an end-of-year English essay that was deemed “too good to have been written by a high school student.”