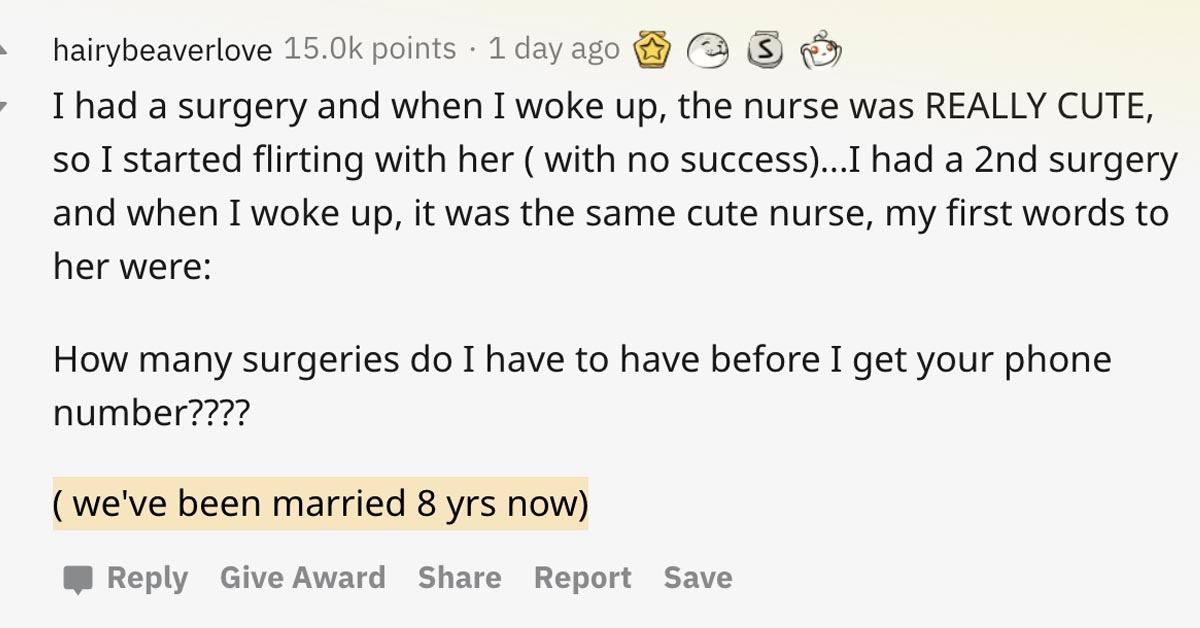 It’s often difficult to find just the right words in the heat of the moment, and those who manage to do so often feel as though they have the power of a thousand gods flowing through their veins. Such is the topic of a recent Ask Reddit thread that poses the question: “What’s the most badass thing you’ve accidentally said in the heat of the moment?”

Maybe they landed a winning verbal blow in an altercation with a significant other, landed a significant other, savagely dealt with an annoying workplace situation, or otherwise managed to diffuse a tense situation using only words. But people came out of the woodwork to leave their own responses, and we’ve compiled the best of them for your viewing enjoyment!

Me and my girlfriend at the time we’re having a discussion about her going back to school. She kept putting it off every semester, and one day she got angry at me trying to get her to actually go back, not just talk about it, and she yelled “Rome wasn’t built in a day!” And I responded, “yeah, but it was built.” And a decade later I still think of that. – beatdownbuffalo

I work in waste management. I’m also a pretty small person (like, “they don’t make clothes at Old Navy in my size” small).

I was wheeling a stack of drums out to our loading dock, navigating pretty much purely on instinct since I couldn’t see over or around them. Lo and behold, there’s someone there chatting with the shipping people. I run straight into him.

I’m surrounded by everyone in shipping, some pretty big dudes, and I feel amazingly embarrassed. I leaned around the drums to look at the guy I hit, and without even thinking, said, “the fuck you want me to do, see through ‘em?”

Everyone burst out laughing and the guy even opened the door to the dock for me.

Every time I see him now he pretends to duck. – blueshran

I was accused of being passive-aggressive. I replied “Which part sounded passive? I don’t ever want to come across as passive.” – kezopster

At a party a few years back, someone stole my friend’s purse. Her boyfriend found the guys who took it and got it back for her, but he was still in an angry, drunken rage and was continuing to escalate the situation when he was well outnumbered. My friend finds me and says, “I’m afraid [boyfriend] is about to get into a fight, I need your help. Stop him, please!”. I stand up, and I tell her, “I can’t promise you I can stop him from fighting, but I can promise you I won’t let him lose.” Before walking off to find him.

Ultimately, no fight actually broke out, and I didn’t realize that I had basically said a cheesy one-liner until after the fact when my friend told me how intense that line was. I didn’t mean for it to sound so dramatic, I just wanted to let her know I wouldn’t let him get his ass kicked, I didn’t mean to make it sound like I was about to demolish three guys by myself like I’m some sort of action hero. – Reesicle

I worked at a book store and a customer asked me “How often do the periodicals come out?” I deadpanned “Periodically.” and he asked to speak to my manager. Worth it. – Jokulgoblin

“Go wait with mommy- daddy might be going back to jail again”. Guy pushed my 5-year-old daughter at the fish store and SHE started crying. When he heard me say that he RAN out of the store. – asgardian_superman

I’ve never been to jail before.

We had an overly dramatic neighbor who always claimed she was sick and dying.

My mom came to see my kids in the middle of battling stage 4 lung cancer.

The neighbor pulled her, “Hi Rita, so glad to see you. Did Jason tell you that I am dying?”

My mom looked right at her, smiled and said “Me too, dear. But not today.”

Idk about badass, but I years ago I worked at a Hard Rock Cafe, and we often had pre-shift server meetings outdoors on a patio, and my while boss was droning on about us selling more overpriced plastic cups I was staring off at the spinning globe on top of the building that says “save the planet” on it, I interrupted my boss by blurting out “if Hard Rock is trying to save the planet, why do we waste so much paper?”, which was really directed at my managers, who had a hard-on for printing out stupid memos. They somehow didn’t realize it was about them specifically and passed the comment up the food chain, which ended up resulting in the entire company changing their payroll system to paperless, globally.

As a reward I was given a pin shaped like a lightbulb that said “bright idea” on it. Thanks, I guess. – Canadian_Neckbeard

There was this one extremely attractive girl in my COMM 101 class in college. One day, for a project where we interviewed other students, I was partnered with her. We ended up not finishing our questions in class, so I asked her if I could meet her somewhere to finish interviewing her. She said yes.

Fast-forward to the next day, I meet her after her dance group finishes rehearsal. I knock through the last few questions, and the final one which I ask is “What do you perceive the future to hold?”

She replies “I don’t even know what I’m having for dinner tonight, I have no idea what the future holds.”

So I say “Well, if you don’t know what you’re having for dinner, do you want to have dinner with me?”

She laughed, said yes, and though we only hooked up that night, I still look back on that day as one of the best dating stories I’ve had yet. – TheHoagieMan

How many surgeries do I have to have before I get your phone number????