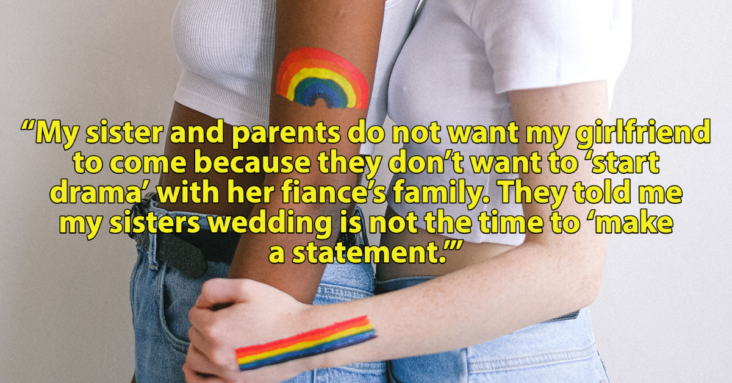 One Bisexual Redditor ran into some family drama because her sister is marrying into a family with homophobic in-laws, and everyone is urging her to leave her girlfriend home and not bring her to the wedding in order to not start “drama.” So she declined to go altogether. A solid choice, I think.

“My sister is having a destination wedding in Hawaii next Spring with immediate family only (plus spouses/serious partners). I am a BI female who has been in a relationship with a woman for the past year. We grew up Catholic, parents used to be insanely homophobic but have mellowed out over the past several years, and they begrudgingly accept my girlfriend (however I can tell they are not thrilled).”

The OP’s sister’s fiance and his family are “very Catholic,” and his parents and grandparents are also homophobic. The OP’s fiance knows she is in a relationship with a woman, but his family do not.

“My sister and parents do not want my girlfriend to come because they don’t want to ‘start drama’ with her fiance’s family. They told me my sister’s wedding is not the time to ‘make a statement.’ I’m not trying to start drama nor make any statements, just being my authentic self with my girlfriend whom I’ve been with for a year now.”

The OP told her sister that if her girlfriend is not welcome at the wedding then they both will not be attending. This started major drama and upset the OP’s sister, who will not have a bridesmaid and who does not want to explain why her sister isn’t at the wedding.

It definitely does not feel right to have to hide an entire facet of your identity just to attend a wedding without being harassed. What do people think?

“Guess your sister can either explain why you aren’t there or invite your SO. Sounds like a ‘her’ problem,” said CaliforniaJade.

“She can kowtow to the homophobes by making a homophobic rule for her wedding or she can have her bi sister at her wedding. Can’t have both and OP isn’t to blame for it. The ball is in the bride-and-groom’s court. Sounds like a no-brainer to pick your own sister over a bunch of homophobes but what do I know,” said No_regrats.

“NTA. You are not trying to make a statement, you are living your life. Don’t waste your time, your money, or your emotions on these people,” noted flora_pompeii.

“NTA. I had an almost identical thing with my partner. You come as a single unit comprised of two people. Not divisible. Not negotiable. They either want you both or they don’t want you at all. The choice is simple and theirs to make; your family either choose to exclude you from a big event because it’s awkward for them or embrace you and deal with it? If they would rather you didn’t attend to save them an awkward moment then they can go suck a bag of non-gendered-genitalia. Never has there been a more appropriate situation for the phrase ‘you can go f*ck yourselves, darlings,” said claosuk.

“NTA. Of course you’re not an asshole. It’s not ‘causing drama’ to bring your SO to a wedding. And being Catholic is no excuse. I’m Catholic. I’m not homophobic. Jesus doesn’t like haters,” explained Osolemia.