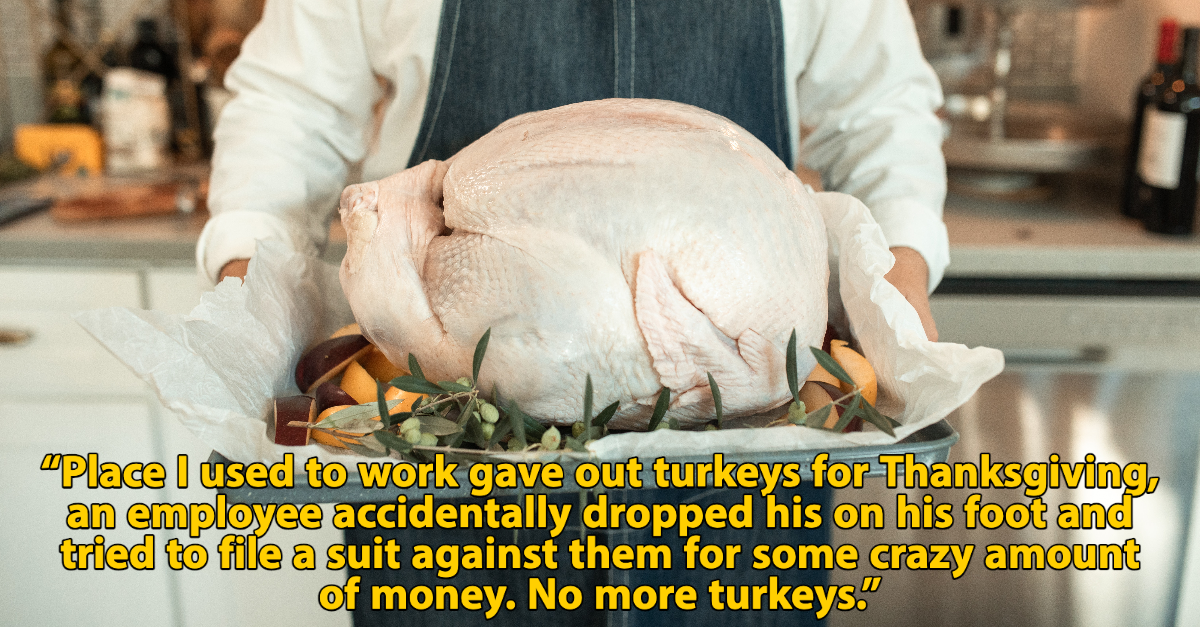 We all know that one coworker. Maybe they’re creepy or try and get away with stuff that is pretty illegal. Or maybe they just bend the rules a bit in a way that doesn’t really hurt anyone. Regardless, it’s often one coworker that tends to ruin things for the rest, resulting in the taking away or privileges or the remaking of an easy job into one that’s harder.

On Reddit, people are sharing examples of how this happened to them, how one coworker’s bad behavior (or totally normal behavior, in many instances) ruined things for everyone.

“Only one personal item in your office. This was a financial institution so customers came into our offices. This was put in place because of one lady who had her office packed with trinkets including a handful of dolls. Yes, creepy dolls. Come and get your auto loan also don’t worry we have some dolls here to witness your transaction.” —

“A video game company I worked for provided free snacks and sodas. One Friday HR had just done a shopping run and was bringing in a truck load of junk food. One employee was caught sneaking a case of soda out of the parking lot. He wasn’t fired or disciplined, it was just made public why the perk was ended. He quit shortly afterward and attempted to sue for a hostile work environment. That went nowhere.” —

“Not at a workplace but at a summer camp (YMCA). Only children under the age of 9 were allowed on the playground due to the fact that 2 older kids (don’t know how old they were) were caught kissing on the playground.” —

“No popcorn. I work at a financial company and not once, but twice, someone burned microwave popcorn during end of day processing and caused the building evac. Every once in a while a new person is cooking some up and I just imagine the talking to they’re about to get.” —

“Had one person download a free student version of software that they used instead of the one the company paid for. Almost cost the company a decent amount of money. Now everything is locked down on everyone’s computer to the point that I can’t delete desktop icons without having an admin.” —

“We used to be able to pop in an ear bud at work with the offset being that we couldn’t spend more than a few seconds here or there to switch podcasts or something. Naturally, some people took a mile and spent minutes on their phones. Since everyone was afraid of confronting these people, phones and earbuds were banned in work spaces altogether.” —

“We used to get a free beer after our shifts at a pizza restaurant I worked at, until the manager’s little brother got in a car accident after work (he ran a red light or something). That was fun while it lasted.” —

8. You Must Request Soap

“Well, I went to the Dr office the other day. At the bathroom there was a sign. It said, ‘Due to misuse of hand soap, you will have to request soap from front desk.’ I’m weirded the f*ck out. What the hell are they doing with the soap?! At the doctor’s office?? I was just too afraid to ask.” —

9. No Skirts, Shorts, Or Skorts

“No skirts, shorts or skorts, at all. I used to work in a bar and the dress code was simple, just wear black. Didn’t matter what is was, as long as it was plain black. In the summer the girls used to wear skirts or shorts so that they’re not uncomfortable while working and everyone was fine with it. A new guy joined in July of 2021, and it was very hot so people had skirts on. He kept on taking pictures under the girls skirts and of their thighs. He was caught many times but instead of him being fired, they just banned skirts. Thanks a lot Martin.” —

“One person complained that he wasn’t ‘trained properly.’ We all now have to do this massively long training workbook during our shift, along with morning weekly quizzes we have to do with training questions. Everyone. I’m pretty sure no other company does this. It’s been weeks and i’m still not finished with it.” —

“Can’t keep personal items at our desks. People lost a lot of personal items over the Covid work from home period. Only when we returned to the office, it was at that time did things start going missing. There’s either one or a few thieves among us. So to cut it down, they say only keep the stuff at your desk that you’re willing to lose.” —

“We used to have casual Friday and people could wear jeans. One day a girl came in wearing sweatpants that had ‘Juicy’ printed across the butt. The CEO happened to be visiting our location that day and he saw her. Casual Friday was immediately abolished and it took years for them to forget Juicy Girl and reinstate it. But in the intervening years, they would have fundraisers where you could buy tickets for days that you could wear jeans.” —

“No sneakers. One manger was obsessed with this girl who was 30 years younger than him (50-20) and her commute was two hours long. She sometimes forgot to change them out and he must have got sick of her turning him down then he mandated a no sneaker clause.” —

“Place I used to work gave out turkeys for Thanksgiving, an employee accidentally dropped his on his foot and tried to file a suit against them for some crazy amount of money. No more turkeys.”

“Everyone has to speak English, because one lady thought people were talking shit about her in Spanish (they were!)” —

“I work at a warehouse. Someone cut their finger bad enough that now we have to use a plastic knife and scrapper. I feel like I’m back in elementary school lol.” —