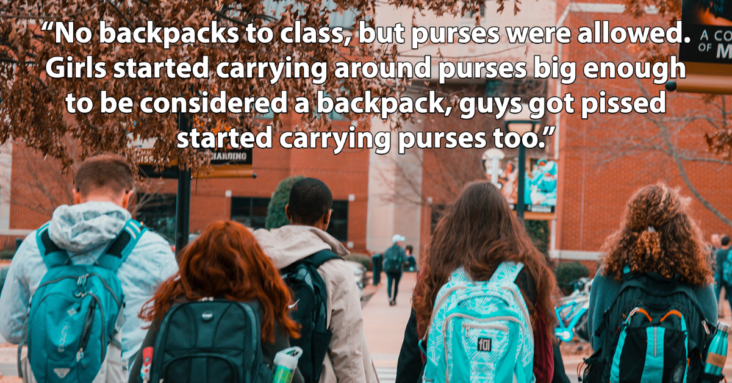 No matter how much they try, schools sometimes screw up when they try to control students too much.

A lot of arbitrary rules end up becoming rules that are broken easily because they end up being ridiculous.

Vandalism in the bathroom? No problem, you can’t use the bathroom! Oh, wait. That’s a terrible idea. Skipped school? Okay, how about suspension for a week?

Punitive measures tend to backfire when kids can’t find the logic or consistency behind them—and so a lot of these dumb rules end up biting the dust.

On Reddit, folks are sharing the dumbest rules enforced at their school.

I just want to know: who keeps coming up with these?

“In my freshman year of high school we had a terrible vandalism problem, the bathrooms would be broken in various ways almost constantly. In a stroke of pure genius, the staff decided that any bathroom that was vandalized would be closed for the week on first offense, the quarter for second, and permanently on the third offense. They took back the rule after closing every bathroom on day one.” — Samus388

“We were all given these ugly planners at the beginning of the school year, with a few pages at the back filled with ‘hall passes.’ If you didn’t have your planner, or if all your boxes were filled, you weren’t allowed to go to the bathroom. And no, you couldn’t buy a new planner. Or borrow one from your friend. The only excuse you had was if you had a doctor’s note, but no doctor is going to give a note for an upset stomach caused by the school lunch.” — Safe_Use4057

“In 6th grade they switched out all student chairs for large rubber stability balls. There was a strict “no bouncing” rule. It was a disaster.” — letitgr0w

“My high school mascot was Daniel Boone holding a musket. A kid wore a guns n roses shirt to school and was told he had to change shirts because of the pistols on the shirt. He pointed out the hypocrisy of the school mascot and they changed EVERYTHING. The mascot was switched to holding a flag pole instead. Every instance of the mascot was changed from the multiple signs outside and around the school to the giant picture in the middle of our basketball stadium. Holden, you’re a f**king legend for this.” — smith0825

“Took all the doors off the men’s room bathroom stalls because of vandalism for 2 months.” — Endless_Vanity

“You couldn’t wear ANY kind of head items that were ‘gang colours’ (red or blue) – this included hair bands, scrunchies, beads in your hair, ribbons – ANYTHING. I got in trouble for wearing a blue hair band with white polka dots.” — Pleasant-Flamingo

“Prom was a mandatory lockdown for the night in order to avoid students going to parties after prom. Prom was held at various house parties across town instead.” — Coffee-spree

A girl and a boy couldn’t sit together. The school employed ‘disciplinarians’ to roam around the school and monitor this ‘activity.’ If found, you will get a reprimand, if found repeating the offense, you get sent to the principal office and if continuing, then eventually escalated to the parents etc!” — themorrigan86