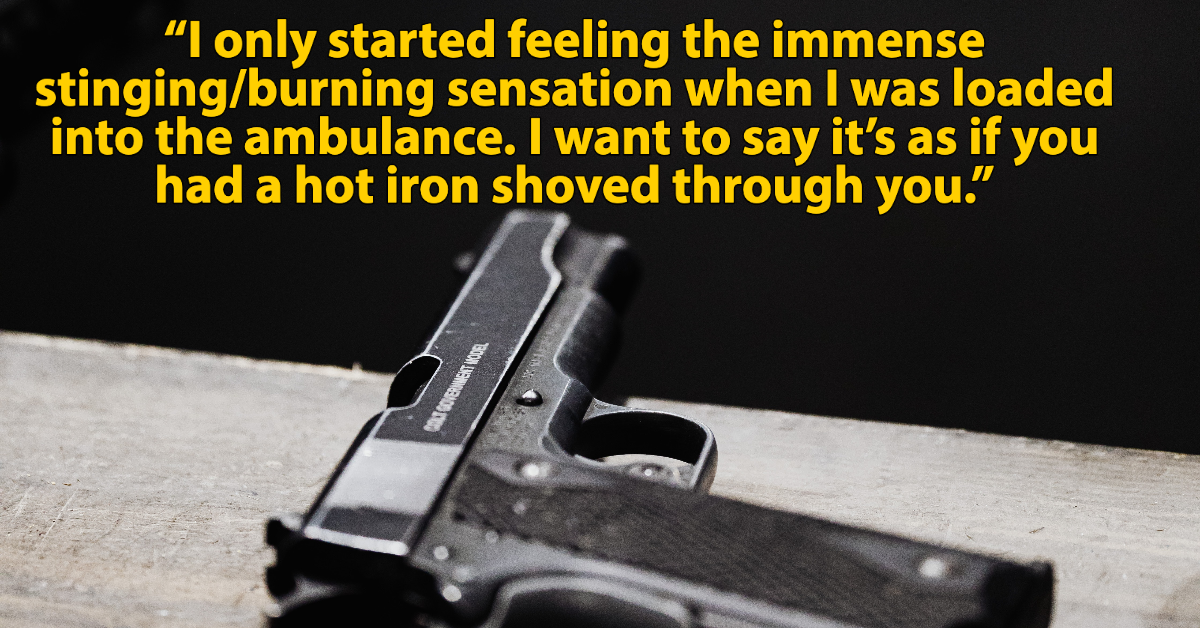 Gun violence is unfortunately all too common. But what does it feel like to actually be shot? Some people want to know, others are happy to share. On Reddit, folks are sharing their experiences being shot — some more than once. And as you can imagine, being shot is incredibly painful — and according to many of these survivors, you’re likely to feel some pain for the rest of your life.

“I took a 7.62 to the stomach in Afghanistan. Felt like somebody had smacked with like, I dunno, a flyswatter or something. A short sharp smack. Didn’t feel much until I tried to come out of cover and I just…… couldn’t. Couldn’t make my body listen to me. Then the pin hit. I’d put it at like, I dunno, an 11/10. Bullet blew off half my liver.” —

“I didn’t really feel either of mine until about 10 minutes later. Took a grazing shot off my left arm and one in the right hip that went out my back thankfully missing my kidney. The arm felt like a bee sting the hip knocked me back a step the adrenalin at the time masked the pain.” —

3. Stabbed With A Poker

“Chest, .357 magnum, through sternum, lung, ricochet off of rib, through scapula. Still have half under my shoulder blade. Felt like I was stabbed in the chest with a hot fire poker mounted to the bottom of someone’s foot when they drop kicked me. Was not expected to survive (severe blood loss), of course. Very good EMS team kept the liquids where they were supposed to and great doctors and nurses kept me going.” —

“I was shot with a .22 in the back. The initial shot hit my vertebrae and paralyzed me from the waist down. I literally just stiff legged and fell backwards. I then felt a hot wave run down my back and to my butt. Then the seating pain set in. It was excruciating and literally screamed and swore the whole time. When someone asks the level of pain I was in I tell them the think of the worst pain they’ve experienced and times that by 100. The pain and realization that I couldn’t move my legs was just heartbreaking and I just wanted out. 3 years later and lots of intense physical therapy I have gained alot of movement and function back. I can walk with the aid of AFOs and crutches, but still need a wheelchair at home and for long distances.” —

“I got shot in the ankle when I was 10. Honestly I thought a rock hit me. Just a slight stinging feeling. Didn’t really hurt, I even kept running with my bike. Later at the hospital was a different story. The doctor tried to remove the bullet without putting me under. He said the pain medicine would make me forget everything. He gave up after a few minutes of hell. And, whatever he gave me didn’t work as described, but it did oddly make everyone look purple from what I remember. So maybe it half worked? lol.” —

“Right thigh, 9mm, grazing shot across the front of the leg about 4 inches above the knee. It plowed a channel of skin and some flesh off the front. It felt searing hot like someone had laid a hot piece of metal on my leg for a second. Then, the pain went away for a while until the adrenaline wore off. It honestly hurt worse 6 hours later than it did when it happened.” —

“I was shot during a home robbery. I’m probably one of The luckiest people alive. The bullet no joke scratched my cheek and then went through the top of my ear and also a bullet grazed my wrist and opened it up. I didn’t feel anything but just liquid running down my face and my wrist was burning. Scariest night of my life and RIP Christian. Miss you so much buddy.” —

“I was shot in the leg. It felt like a hard flick of a finger then numbness. I didn’t think I was shot until I saw the hole in my pants. Even then I thought maybe a rock hit me or something. No pain or blood until I started walking then came a gush of blood and then my entire body went limp. People saw what happened so I had help right away. After that it hurt but somewhere around a 6-7 on a scale of 10. Another time I was hit by a fragment from a ricochet on my forehead. Same feeling of being flicked with a finger. The area around the wound went white and there was no blood. The pain level was around a 5. Neither time was bad but I don’t want to try my luck again.” —

“I was randomly shot while walking down the street with my girlfriend in 2013. I didn’t fall to the ground or anything like that. Walked into a store and told them to call the cops. It didn’t hurt too bad at first. A slight pinch. The heat builds up and the pain comes in. Some throbbing as the blood pumps out. I was extremely lucky as the bullet lodged between my lower right ribs in the back just above my kidney. The aftermath was a really achey back. What I remember most was how everyone around me except for my girlfriend just walked around us like nothing happened. I was suffering and potentially dying and everyone just ignored it. ‘Not my problem’ I suppose. I lost a lot of faith in people that day.” —

“I accidentally discharged my 9 and I was hit in the head. While it was going on I honestly did not feel any pain but everything slowed way down. Healing and recuperating was the hardest. My mouth and jaw was wired shut for several months. Had to have complete facial reconstruction surgery. Had to take a piece of bone from my skull and graph it to my nose just so I could have a nose. I also had to have a feeding tube for almost a whole year. I’ve recovered fully and I’m very lucky. I remember mostly everything. Something’s from the incident I don’t remember, but for the most part, I have my memories in tact.” —

“I was shot when I was nine. I didn’t feel anything at first because my mind was in fight or flight mode and my only focus was dialing 911 and saving my mother. I only started feeling the immense stinging/burning sensation when I was loaded into the ambulance. I want to say it’s as if you had a hot iron shoved through you.” —

“It hurt, like, a lot. Was shot from behind, I was running away. Small caliber was best guess, maybe .22 Since it went in and out of my right arm. Entry just left and down my arm from my elbow, exit on forearm opposite side. Xrays showed hairline fracture on the ulna. Since the bone held and wasn’t shattered by the bullet, they assumed small caliber. Felt like getting hit in the elbow with a hammer. Then warmth…which I later found was the blood leaking. No major arteries and lucky ricochet away from my center mass. Bloody clothes and ambulance ride. Pain killers and 8 hour observation to make sure no swelling which could lead to amputation. Trauma room for 8 hours, then sent home with pain killer prescription. Would not recommend.” —

“I was hit twice during separate tours in Iraq and Afghanistan. The first time the round caught the armor plate and felt like I had been hit with a baseball bat. It knocked the wind out of me and, when we got back to base I had a huge bruise on my chest. It hurt to breathe for a few days and getting dressed was a m-fer but I got light duty during that time. The second time a round clipped the side of my neck. Now that one really hurt and there was a lot of blood (think of your worst razor knick x10) but the pain was cut by the adrenaline.” —

“Took an 7.62 round to the plate carrier, bruised for weeks, it felt like getting kicked by a mule in the chest. Took a piece of shrapnel to my ankle, felt cold then white hot pain for like thirty days, now it’s just a dull ache twenty years later.” —

“It hurts Like someone stabbing you with a sword that was heated up.” —