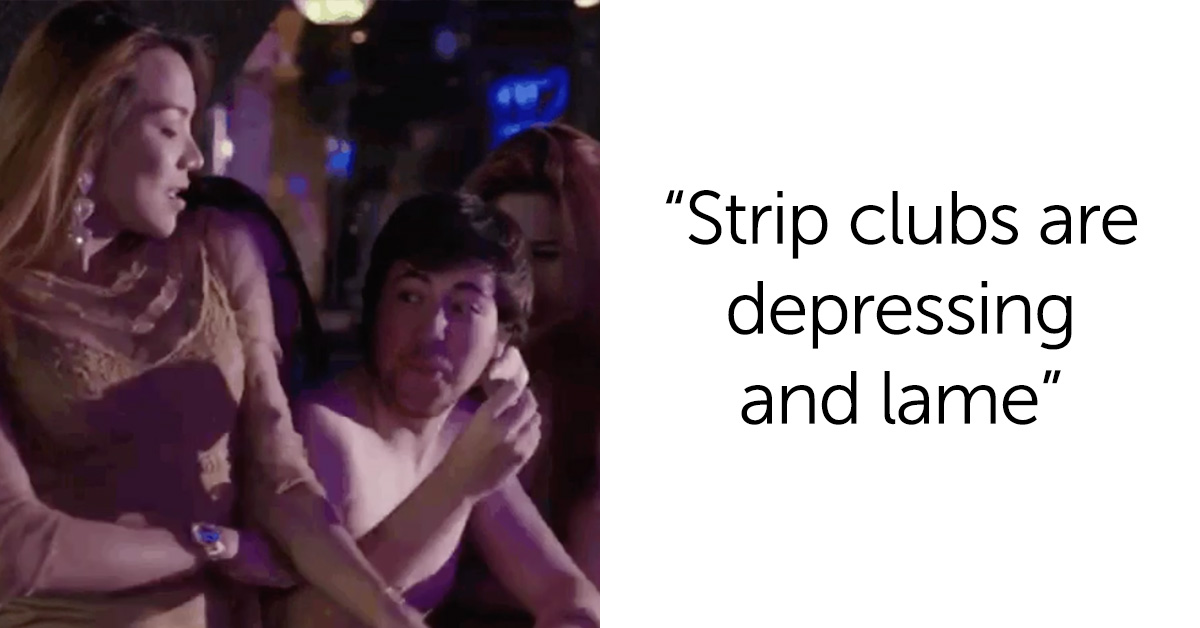 Men as a whole have a reputation of being, shall we say, pretty closed off—and not just emotionally. A lot of men aren’t great at communicating with their partners or with each other. This lack of openness can sometimes be enforced by toxic peer pressure from other guys who look down on men sharing how they feel.

“What is an opinion you have, that is generally unpopular amongst other men?”

And there were a lot of answers about everything from sex to emotions.

Strip clubs are depressing and lame

Yoga is a great thing to do if you work laborious jobs.

3. Lap dances aren’t worth it

I don’t like strippers. If I have to pay for it, it does not get me going at all.

I get a bit emotional while listening to beautiful music… It’s my opinion that men would rather do this while alone.

Working 80hrs a week dosent make you any more of a man than working 40 hrs a week. We are all out to get bread, stop dehumanizing other men for not working their life away. It’s okay to have weekends off and enjoy life.

It’s ok to complain and express discontent. It helps process your struggles.

I like fruity “feminine” drinks!!! I am a whisky/scotch man but give me a Mai Tai and I will drink the shit out of it. I have never understood why men aren’t supposed to like drinks that taste good.

8. Men are more than booze and guns

This may be a bit specific, but I’m getting married soon, and I hate how everything regarding the groom/groomsmen is nothing but whiskey, mustaches, and bullets. Sure I enjoy whiskey now and then, but its like mens’ only identity is booze and guns. Its so weird.

9. No shame in making money

If it’s honest work and you’re able to keep on top of the bills, there’s no shame in your job.

You can live a fine comfortable life without ever setting foot in a college.

10. No shame in not hustling

People shouldn’t be pressured to always be high achievers or to have some huge goal they’re working towards. I’m not saying it’s OK to be “lazy,” but equally we don’t all have to be aiming to become senior managers or famous celebs. Some dudes just like to go to the 9-5, put in their time, come home and chill with the family and that’s totally fine.

I’m not into casual sex.

It’s better to have quality sexual encounters instead of quantitative.

It’s ok to call other guys good looking. Not tell them directly, but just be able to tell your friends “hey you know what, that guy over there is handsome”. Doesn’t make me gay, or make me weird in any way. I feel comfortable enough with myself that I can acknowledge there are some damn good looking guys out there, so good for them.

That being a dad, is in fact, my actual favorite thing to do.

I have painstakingly procured a life, and career, that allows me to exercise at work, practice my hobby during working hours (BJJ). So basically I telework. But I am not monitored. I do all my work that needs to get done on time and early and above standard. So nobody questions what I do during the day. But they do know. I have told my supervisor and when shit pops, it never gets in the way of work. Balance. So that way all my time when my kids get out of school can be devoted to them with 100% of my attention. That way I can listen to them, really listen to remember those things that are super important to them. I ducking love watching them explore the world and first crushes and turning down boys and my little guy thinking he’s he-man cause he lifted a gallon of milk. Lest we forget that’s a man’s first feat of strength to show mommy we are big boys. F-cking love it.

“Not all men just want to hook up, and there’s nothing wrong with that.”

Even when I was app dating (in a long term relationship now), I was not dating to hook up. I straight-up turned down one-night stands and various sexual encounters with women I knew I had no interest in seeing again. The concept that I’d turn down a willing and consenting partner and leave a situation where I could have gotten laid was a foreign and “wrong” idea to everyone I discussed it with. The prevailing opinion was: ‘dude just hookup and bail, even if you know you’re not going to see her again you can have some fun first.’ Don’t know why no one else saw it my way. I just am not into sex with someone I’m not invested in and don’t trust yet.

16. You can hug your friends

It’s not gay to touch or hug your friends.

Crying and being emotional is not only normal, but can be a needed cathartic release as well.

There’s nothing wrong with wearing your emotions on your sleeve.

Personality is better than attractiveness. Some of my close buddies try to only go for 10/10 chicks. Like ya that’s good and all but if you can’t even talk to the girl then what’s the point

20. Tell your friends how you feel

Telling your friends you love them is perfectly normal.