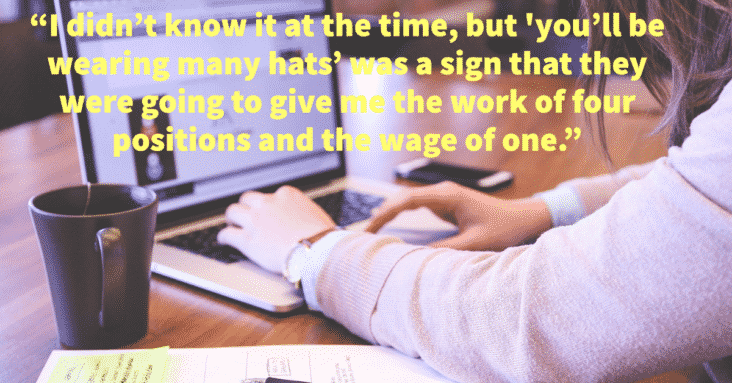 When applying for a new job, there are lots of things to check off your list. One of the most important? Make sure you don’t notice any subtle red flags that will end up making you regret your choice.

Most of the time, you won’t show up for an interview and get screamed at. And you won’t necessarily witness the person you’re interviewing with harassing a current employee. But there are little things that sometimes get lost in jargon-filled language or a quick side-eye from one interviewer to the other.

On Reddit, folks are sharing the subtle red flags they encountered during a job interview that informed them that working at that place would be a total disaster.

“‘Well, the overtime isn’t mandatory, but most folks stick around after hours most days.’ Spoilers: The overtime is mandatory.” — IM_OK_AMA

2. If the interviewer is trash-talking:

“Was interviewed by a Senior programmer and the department head. The department head was continuously making condescending remarks towards the other interviewer. Poor guy just sounded broken. Hope he’s somewhere else now.” — khanman504

“I was once part of a group onboarding for an IT job. They handed us all the one-page new hire ‘contract’ and everyone except me signed immediately. When I read the paperwork, I discovered we were signing a mystery document. Clauses included, ‘I agree to abide by the personal search and seizure security policy (attached).’ Without other pages, there was no way to determine what I was agreeing to. I kept requesting more and more pages until the HR drone said, ‘ok, I guess [me] is just determined to hold everyone up. We will handle you separately if you’re struggling so much.’ After I walked out and drove home, I called the hiring manager to apologize for not taking the job. He informed me that HR reported I had walked out after refusing to be drug tested.” — ManiacDan

4.  If they want you to breach your own non-solicit clause…

“When they ask out of nowhere what clients can you bring with you.” — Space2345

5. If they want you to work for free…

“Once an interviewer straight up asked me if I had any trouble working for free on weekends… I told them my free time is more valuable than anything and that the only way that I would work a weekend is if they are paying me and if I felt like working a weekend. She got really mad at me and ended the interview right away. Biggest red flag I’ve ever seen because they didn’t even try to hide it.” — lempiraholio

6. If they’re a little too honest in answering your questions…

“This actually happened to me:

Interviewer: Do you have any questions for us?

Me: what is a challenge this department has recently faced?

7. A lot of job applications doesn’t necessarily mean the job is a good one…

“My favorite is ‘there’s a lot of people waiting in line to work here, count yourself lucky.’ Huge red flag.” — Original_Resist_4570

“When you are signing all the forms they give you and you are taking your time to read over every document so that you can fully understand what you are getting into and people come in and start telling you that you don’t need to read this and that just sign here and so on.” — Saxon_Shields69

9. If they don’t know what they want you to do…

“Jobs where the expectations of the position aren’t clear. The person hiring you should be able to give a clear idea of your responsibilities are day to day in a practical way. It shows that the company understands what it wants out of the position. I’ve worked a couple positions that had a really hard time figuring out who was supposed to do what that lead to a lot of confusion and both of them had this in the interviews. If the company you’re working for can’t define what success in that position looks like you won’t be able to either.” — Xerodo

“I didn’t know it at the time, but ‘you’ll be wearing many hats’ was a sign that they were going to give me the work of four positions and the wage of one. I didn’t last a year there before I left and now I won’t even finish reading job ads that include that line.” — Couch_slug