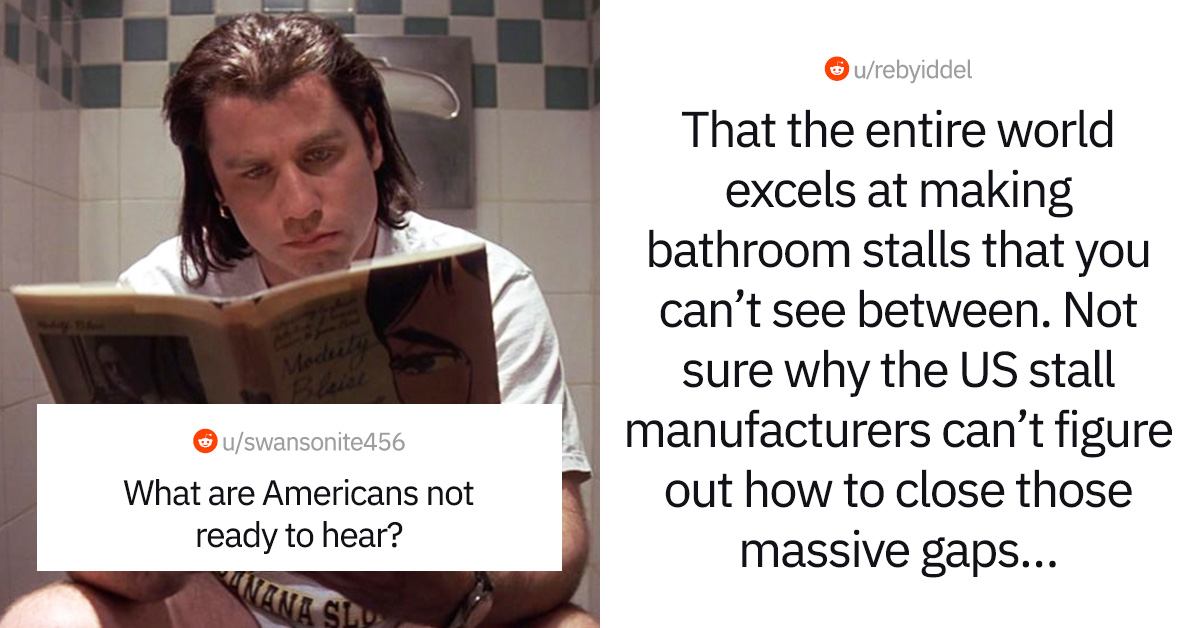 There are plenty of things America is known for getting right, but the only way to get perspective on the way we live is by hearing what other countries think about how we do things.

Someone asked people or Reddit to share “things Americans aren’t ready to hear” and while many of them are spot on, a lot of them are things we’ve known for some time.

That the entire world excels at making bathroom stalls that you can’t see between. Not sure why the US stall manufacturers can’t figure out how to close those massive gaps…

México is not in sepia lightning.

Working 80 hours a week isn’t something to brag about.

You’re the foreigner in 192 countries

Edit: UN recognizes 195 countries (missed out on Palestine and the Holy See). Could go up to 198 depending on your sources. Choose whichever one you want

Profit-based healthcare is wrong on so many levels

Your tipping culture is a scam. Tipping should not be a burden obligation of your customers.

You let food companies put in whatever crap preservatives they want and makeup weight with artificial sweeteners instead of real ingredients. That’s the big threat to your life, not secret communists.

You shouldn’t have to give birth and then go back to work a week later.

You need more than two political parties for democracy to work

Yes, you do have an accent.

If you think you don’t because you “read words exactly as they’re written, without any kind of regional flair”, you’re mistaken about that. There’s no such thing.

Speaking without an accent would be like typing without a font. An accent is just a method of pronouncing a language – everyone has one!

What the temperature is in Celsius

Canadian here- you guys have amazing landscapes, culture, and food. Your folks are usually very kind and welcoming. But the quality of life you guys have makes me really sad. The minimum wage is brutal, like 7 dollars, while ours is 15, so much poverty there. And paying for healthcare, people going into debt just for getting sick?

Also- the way you treat your women is horrifying. I know you guys have criticized Middle Eastern countries for women wearing Hijabs and having few rights but look in the mirror. Restricting access to family planning and abortion services, making women pay for the necessity of going to a hospital to deliver babies? No paid maternity leave/ only 6 weeks, like what is that? That’s nowhere near enough. Like why??

Gun ownership issues, school shootings, healthcare, and student debt bankruptcy, abortion restriction, poverty level minimum wage- these shouldn’t be political issues- these are human rights that you guys aren’t ready to accept- and to your own detriment.

Pledging allegiance to your flag every morning is really strange. We had that in Europe ~80 years ago. It didn’t end up well for anyone 😀

You’re about this close to not being a democracy anymore. You should be paying attention.

Thanks for the awards friends! I didn’t think this would be the post where I got my first awards but life is chaotic like that

Despite every problem your country is dealing with right now, you are all still immensely privileged and most of you live a life that millions can only dream with.

Religion has no place in politics, hence the “separation of church and state.”

America is only capitalist for poor people. Rich people live in a socialist state, where they constantly get bailouts, subsidies and debt forgiveness.

A bidet is cleaner then using toilet paper

After several trips to the US, my colleagues there couldn’t accept how poor they were, and 10 min in any city makes it obvious.

Huge individual debt, minimal savings and no time for themselves. That is not the standard in the developed world. Even when our taxes are high we have to time to rest and basic life essential services covered. Free/low cost education even allows us to break the class divide if we want it enough.

Sure there are millionaires and billionaires in the US but chance’s are neither you nor your family will get anywhere close because you don’t have the opportunity to improve without going into decades of financial debt.

Not using the metric system is fucking stupid.