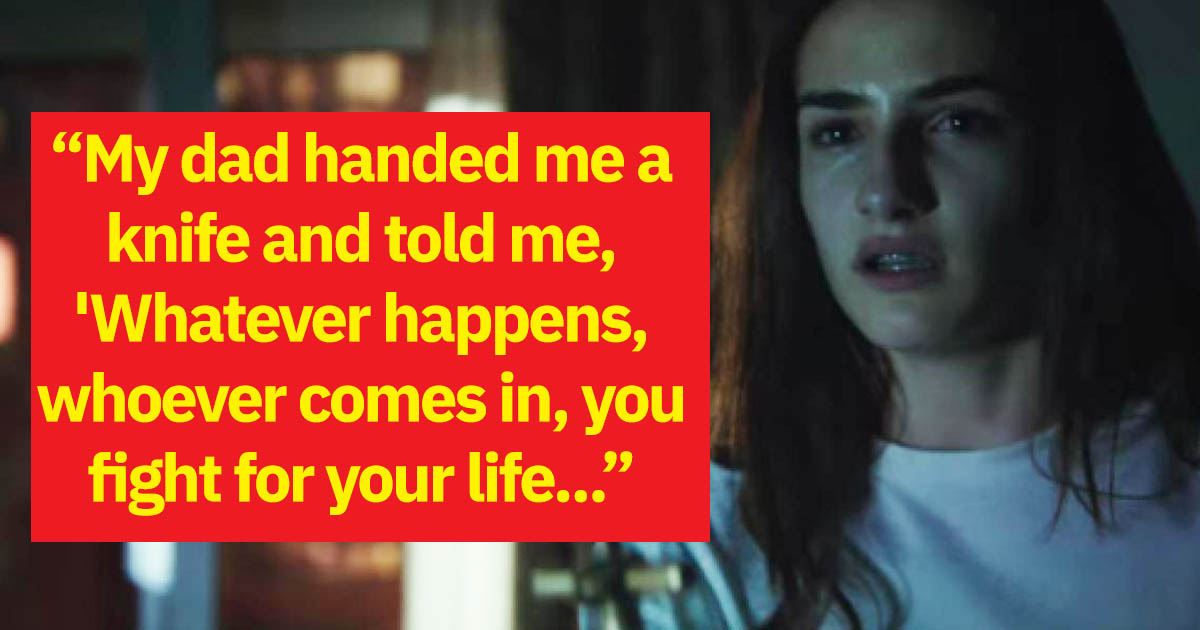 Spooky season never ends in this house, so I’m happy to be able to drag you along through these terrifying tales. After all, isn’t a good scary story not bound by the limits of time… or maybe this astroplane…

“What is the scariest thing you have witnessed with your own eyes?”

And I have to say: the answers were seriously fingernail-biting-scary. I’ve gathered up some of the best ones for you — take a read and let me know which ones scared you the most!

Disclaimer: Some of this content may be objectionable and you should 100% proceed with caution.

“At a job I used to work at, my boss had a heart attack in his office and died in the middle of the shift. The office lights were motion-activated so we thought he left to go do something as it was dark. I went into the office to get a new radio and there he was, leaned back in his chair with his eyes wide open. Scariest thing I’ve ever seen.” —u/Punchlinehappy

“In late May 2013, I went to visit my aunt and uncle in Moore, Oklahoma. Two days later, a tornado warning was sent out. We saw the clouds get darker as time went on, and then I saw a blockage of cloud touch the ground. I watched as that thing grew and came toward town, with the sirens blaring all around. It was simultaneously the most horrifying, yet most beautiful thing I have ever seen in my entire life. I stood there for about a minute before I got pulled away and brought down to the storm cellar.”

“When I was 9 years old, I was in Florida at this arcade/pizza joint. I went to the bathroom and saw on a stall wall a boy’s name and that it said he was there. Fast-forward to me back in Indiana, when I was sitting in front of the TV watching Unsolved Mysteries. They began to talk about an abducted boy for whom the only clue they had was that bathroom stall and his name written in it. It gave me chills and then nightmares for weeks where I saw his name carved out in the stall.” —u/SquishPuddin

“I arrived at an accident about 30 seconds after it occurred. It involved a friend of mine. She was driving, rolled the car, and wasn’t wearing a seatbelt. She was thrown clear from the car and hit a tree. I found her. I did first aid and helped the paramedics lift her onto the stretcher and into the ambulance. Her body stopped functioning about a week later. I think she died on site from massive brain trauma and it just took a while for the end.” —u/Flight_19_Navigator

“Two drunk guys who were homeless started fighting and one got pushed down onto the Miami Metrorail tracks, with a train visible in the distance. He wasn’t able to stand on his own and nobody was helping. I jumped down and forced him back up as someone else pulled him. I was afraid I would be electrocuted or wouldn’t have been able to get him back up in time and would’ve had to leave him.” —u/knovit

“I hit the local bar to get some carryout and a growler. I saw a friend outside and chatted for maybe three minutes when another guy took a step, tripped, and face-planted hard into a ‘stepped’ area of concrete. He began convulsing and vomiting uncontrollably, could not speak, and was bleeding profusely from his head, nose, and ears. In the blink of an eye, this guy was within minutes of dying. He hit the concrete so hard that his nose was shattered and his skull split open across his forehead. The EMTs were stunned when they got there and got him out of there as fast as possible. The scariest part was the speed at which it happened. People were standing so close to this guy, but he went down so fast and hard that there wasn’t time to react and catch him.” “The bartender came out and washed more blood and vomit than I’ve ever seen from the pavement with buckets of hot bleach water. The violence of the impact was shocking.”

7. Slip and fall on half dome

“I saw someone slip and fall from the top of Half Dome in Yosemite. I’m a first responder and have seen bad things, but I have control for the most part in those situations. Watching someone tumbling to their death and knowing nothing can be done was hard.”

“When I was maybe 7 years old, my cousin and I were playing outside. We went into the front yard and saw my brother in his car with his friend. Their eyes were closed, heads back against the headrests, windows rolled up on a hot summer day. Then, they started making these odd jerking movements with their arms and heads. Being kids, my cousin and I thought they were just being silly and messing with us. But when we noticed the drool and that they weren’t responding, we got scared and got my parents. We didn’t know at the time but we were watching my brother and his friend overdose.” “I don’t know what they took. I probably never will. My parents sent us in the house while they took care of them. They thankfully survived, but that image of them passed out in the blue, ’90s Toyota will stick with me forever.” —u/kec36

“I was doing maintenance work in a mortuary alone and heard a death rattle, which occurs when the gasses in a corpse expand and make a lifelike noise, from a body bag that the mortician had just wheeled in.”

“I was working the graveyard shift at a convenience store and was in the back office, stoned, playing Medieval II: Total War, when the door chime rang. I looked over at the CCTV monitor. A guy with a ski mask and gun had just walked in. I jumped up and slammed the office door shut and locked it. The guy took two steps toward the office, paused, then jogged out the front door. Usually these things end up okay but I’ve always had the feeling that if I had been out front, I wouldn’t have survived.”

“I saw an old man slip and die at a bus stop in Portland early in the morning when I was a teenager. It was sad, but what really shook me was the aftermath: He was picked up by an ambulance, the sidewalk was washed off, the washers left, and within 15 minutes, people were occupying that space waiting for a bus. It was like it had never happened.” —u/9600_PONIES

“I remember one time when we were camping, my family was hiking around on this big rock and it starting getting cloudy. My dad and siblings climbed up to the top of the rock, but my mom and I decided it was too steep for us. My dad reached up into the air and said he could feel static on his fingers. My little sister’s hair started standing up a little and my dad was just standing there with my brother, laughing at the staticky feeling he got when he reached up. My mom and I tried to convince him to come down but he wouldn’t. I was terrified watching my little sister’s hair stand up and my dad not doing anything about it.” —u/Briizydawn

“I’m a healthcare provider here and I was in my second year of school and on clinical rounds for the summer. Next to my last day, I visited a cancer patient who wanted to leave against medical advice to go home, see his cat again, and die in peace. No problem, homie. I literally want you to go see your cat. So I continued rounds until we heard a code called. I rushed back to find him literally spewing blood onto his bed and the floor. The guy’s tumor in his lungs had ruptured. He went unresponsive and I watched him go through 10 minutes of CPR before we called it. I had never watched someone die before that.” —u/KenKaneki94

“I saw a person fall out of the back of a pickup going 65 mph. He hit the ground and rolled, then stood up. His baseball cap did not fall off. The truck he was in did not stop. I almost ran over him because he fell into my lane. It was clear he was in a little shock, so I walked him over to the side of the road and called 911. He only had a mild case of road rash since he was wearing short sleeves. I can’t imagine what happened when the people got to their house before someone said, ‘Where’s Bill?'” —u/spamblows

“I saw a dead body whose skin was literally moving because of all the maggots under it.” —u/CALsHero09

“I was driving on the highway and a truck hauling a bunch of lumber almost went off the shoulder, swerved into my lane coming right for me, then swerved back into its lane and tipped over and went into the ditch. I pulled over and puked because I was so scared. A guy behind me went and helped the driver out and called EMS and everything. Everyone was alright but it was very frightening.” —u/faketooter

“I was about 8 years old. My mom and I had just pulled into the McDonald’s parking lot. A man came out, dragging his son by the collar. The kid was about 13 years old. He was crying. The man grabbed the boy by the throat and slammed his head against the wall. I distinctly remember the boy’s choked-off screaming. The man pinned him against the wall and hit him with a closed fist. My mom immediately called 911 and stepped out of the car to yell at the man, telling him to stop. He called my mom a bitch and told her to mind her own business. The cops came and they interviewed me and my mom, then the boy and his father. Then, they let the man go home with his boy. The cops said they didn’t see anything so they couldn’t prove anything. I begged them to stop the man. They ignored me, got in their car, and left. It was the most scared I’d ever been up until that moment, watching the cops drive away and the black pickup with the dad and his son drive away as well. I remember being frantic, terrified. I will never forget that kid or how scared I was seeing him hurt, then seeing people just let him get hurt more.” —u/the_mad_doodler

“I was a 25-year-old tram driver. I almost hit a group of teenagers who ignored all the warning signs, causing me to hit the emergency brakes and injure four of the passengers in my tram, who fell to the floor due to the sudden stop of the tram. I swear, in that moment I saw those kids, I just hit the brakes, closed my eyes, and prayed I didn’t feel an impact. That was by far the scariest thing in my life so far. I was traumatized for two weeks and needed to take off work to go to therapy.”  —u/Money_Currency_2342

“I was working at a chemical plant and saw a guy in a forklift truck make a turn too fast. He wasn’t wearing his seatbelt and the top of the cage landed on his head. I froze for a moment. It was so horrifying. I then ran over and killed the ignition. Some other workers came and we lifted the cage up high enough to pull him out, but it was obviously too late. I can still remember his blood running down a nearby drain.” —u/p38-lightning