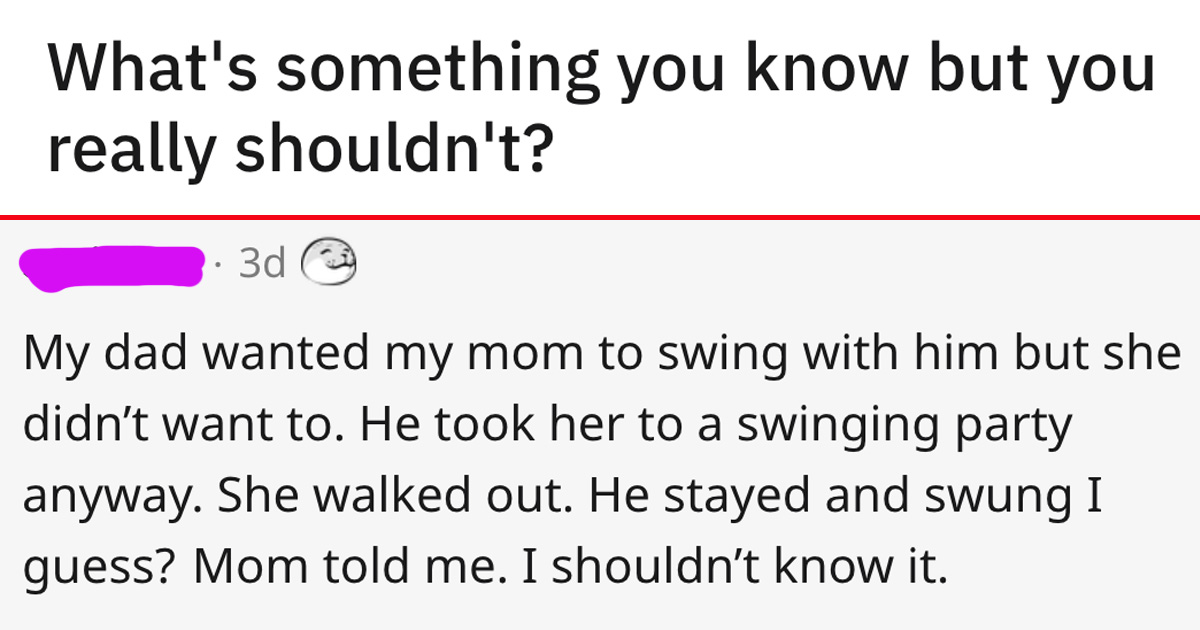 In life, we sometimes learn tidbits of information or stumble upon hidden secrets that leave an indelible mark. The newfound knowledge could be amazing or absolutely horrible, either way, it’s something you know you probably shouldn’t have been privy to and yet, here you are.

In a recent Reddit thread, hundreds of users chimed in to answer the question: “What’s something you know but you really shouldn’t?”

And the answers are surprising.

The answers ranges from deep, dark family traumas that undoubtedly will require a few therapy sessions to criminal activities, international scammers, and illicit romances. There’s something for everyone and by the end of it, you’ll probably wish you didn’t know too.

Here are 20 of the most interesting answers we’ve found.

That my summer job never pressed charges against my friend who stole 12,000 dollars from them over the time of a year because not every closing manager did their audits.

My old Italian teacher slept with the school finance woman to persuade her to run a school exchange programme for the class. We went to Palermo and had a pretty good time.

As a kid I’ve witnessed my raging aunt trying to kill her husband with a glass shard from the door window while they were arguing. She stabbed him in the chest, but glass ended up hitting the bone and she gave up to the next attepmt. They didn’t divorce, they solved the issue and live about 25 years further together (she died this year). I am the only witness.

My old boss told me about her ex husbands death.

Him and his best friend died in a house fire. His kids were told that he died in his sleep due to the smoke. She told me that’s not what happened.

They found his body inside the closet of his room. In his last moments he had been trying to claw the drywall to get out. The ME said he didn’t have enough smoke in his lungs to have died from it. They believe based on the state of his body inside the closet that the fire got so hot around in the other rooms he cooked alive. They said that his lungs were filled with fluid consistent with the air being so hot they were burning inside and he drowned.

To this day his kids have no idea he died a agonizing death.

That my grandmother used to sell my mom out when she was a young teen (not age of consent) and when she fell in love with my father, she refused to sleep with the men my grandmother wanted her to for rent, so she kicked her out of the house. She was 17 at the time, my sister was born just over a year later and me right after.

Regrets. So many regrets.

My mom got romance scammed for $300,000. I had moved out and she turned my bed room into her office. I had stuff still in the room and checked ontop of the dresser. There was a printed form of a FBI report that she had filled out which stated she got scammed for the mentioned amount.

My aunt started dating my uncle on the rebound from the love of her life. When she realised she didn’t love him she tried to call it off but he threatened to kill himself so she went through with it (she was also quite a bit in love with the idea of getting married so I think she felt he was better than nothing). Many tolerable but not particularly happy years of marriage later they are still together and their youngest child is named after the former love of her life.

My dad wanted my mom to swing with him but she didn’t want to. He took her to a swinging party anyway. She walked out. He stayed and swung I guess?

Mom told me. I shouldn’t know it.

That my sous chef sells drugs in the kitchen, on the clock.

The detective of my local police dept lets evidence rot or disappear in storage when it has anything to do with one unspecified gang.

In the early 2000’s, my mother was incredibly sick. For the first handful of years of my life she was mostly bedridden, although she eventually got better in the mid 2000’s. One day when I was like 8 though, I was rummaging through her closet and happened upon an older notebook, a diary of sorts. I cracked it open to find page after page describing the pain she was in due to her illness and how she really just wanted to die because it was so bad. She wrote about how much she loved her kids and how she thought it might be better to pass away to have our dad remarry so we would have a ‘better mother’. It was almost like a suicide note at parts. In the end, I put the book down and tried to forget about it but never did. She is still around to this day though, and for that I’m eternally grateful.

My grandfather got drunk and told me his wife (not my biological grandmother) is a freak and likes it in every hole. He’s in his 90’s she’s in her 70’s.

Thanks grandpa. Congrats on the happiness. I’ll be over here now.

Overheard my mom drunkenly ranting to one of her friends about how “My middle kid wasnt planned and was kind of a mistake. Hes so much like his f–king father, i cant stand him.” i was probly like 7 or 8 at the time and still wish I hadnt heard.

That my old boss was banging the office secretary. They were both married to other people.

*I think she knew I knew. I wish they stopped giving me clues.

That my uncle didn’t die in an accident. He blew his brains out. My mom is a bit of a sitcom-esque idiot who thinks if the door is closed we can’t hear her talking in a normal voice on the other side five feet away. Heard her on the phone talking to other relatives about what happened.

That my aunt has a different father than the guy she thinks was her dad. She’s in her 60s and is an elected official in my state. No effing clue.

That my mom is in a sext-filled online relationship with a young Pakistani fellow.