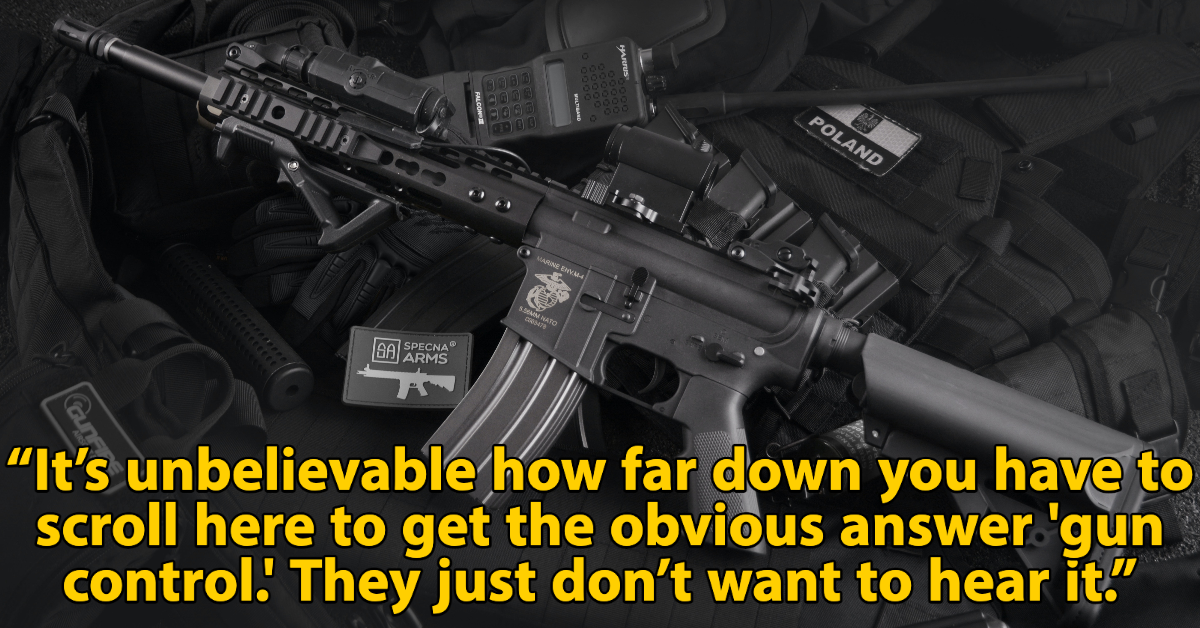 With all the mass shootings, including the latest horror at Robb Elementary School in Texas, people are talking about what America as a country can do to stop them from happening. There are obviously a lot of factors, but the most obvious is stricter gun control. However, others on Reddit have some suggestions that are hopeful while others are more defeated. But most of us can agree that the answer does not lie on Reddit but with the leaders of our government.

“When stopping mass shootings can be monetized.” —

“Nothing that anyone is actually willing to do, obviously.” —

“People want things to be better, they’re just unwilling to sacrifice anything personally to deal with it. California for instance, considered one of the most liberal states in the country, tried setting up govt. housing to address homelessness. But the second people realized those homeless people would now be living in units down the street from their homes they conveniently changed their minds and decided ‘this isn’t the best way to deal with the issue’ lol. It’s unsurprising to a certain extent. This country is founded upon concepts of individualism and personal liberty rather than communalism, where me and my success, are seemingly more important than society as a whole. People are too miserable due to so many things, some are self-inflicted, some are not, to actually be willing to do anything about it imo.” —

“I grew up in South Africa and went to some pretty crap schools filled with some of the dregs of society. We had underpaid teachers who didn’t really care etc I was skateboard kid who was seen as a freak due to skating and liking metal and ‘other’ music. I took my fair share of beatings from the bullies at school and outside of school but I never ever had a desire to walk into school and murder the bullies or teachers or anyone else for that matter. I think the problem in America is much bigger than a weird kid going mad, it’s got to be societal for anyone to harbour that much hate for life. Just my honest opinion and from my perspective.” —

“It is my opinion as an American, that our society relishes depriving itself help. It is every man for himself. And that leaves a lot of people starving for something, be it food, healthcare, mental healthcare, childcare, a sense of community, companionship, parents who are present, justice, a future, somewhere to turn, everything. Combine that with the dead end of late stage Capitalism and a culture of bootstraps and gun violence, well, it’s not a big leap. That is not to say that we do not have kind, helpful people in our country, but our policies are brutal and negligent, which does trickle down unlike our wealth.” —

“First and foremost, stop treating it like a soap opera. The news channels detail and go over so much on these shootings it isn’t reporting, it’s entertainment. It’s become so mainstream that at this point I just shrug and go ‘oh, another one. Whatever.’ I’ll hear about it for another few months, then some other kid will glorify it cause tv and do it himself because he needs the attention and monkey see monkey do, it’s obvious how to get that attention from as many people as possible all at once. The problem is much deeper than this and takes people more qualified than I to solve, but this is where it starts. Edit: Id like to clarify that my stance isn’t some total media censorship on the matter. Simply that the focus has to stop being 99% on the shooter and thus further inspiring more violence.” —

“Not showing us the tragedy to protect the integrity of the victims is a legit noble cause. But not seeing the carnage and horror these weapons of war cause, we get to move on without confronting the full burden of these weapons damage. Things will change real fast when you show a bullet rip a child’s shoulder from its torso on primetime news. Social media does the same, taking videos down to protect us, but it makes it easier to forget. If these kids have to go through it, we should have to watch it.” —

“Nothing changed the last time children barely older than toddlers were shot. Nothing will change this time.” —

“The children of ‘important’ people will have to fall victim. They don’t care if us riff raff die off. We’ve all just been cannon fodder all this time besides.” —

“Swapping the budgets for education and defense.”

“High School admin who is stepping down after this year. This is my last week in a high school and here is my perspective. Parents need to listen and hug their children more. They need to stop playing friend or dictator and actually explain why they do the things they do. Give your kids your time. Every great teacher I work with they are like magnets to the kids because they give them attention. In that this year alone I dealt with a bomb threat and had the kid I would label as our most probable school shooter tell me “Most people think that if they are nice to me, I don’t know, that if I became a shooter, I wouldn’t shoot them…but I think I still think I would..(shrugs)” Today, I had to fill out a cps report because a mom came to the school and started hitting her 14 y/o daughter in the face…So, here’s the deal… and I don’t care if 1 person reads this or 10,000. Give your kids a hug. Give your neighbors kid a hug… tell them, it’s ok to be angry, we all get angry. We all get sad. However, it’s how we deal with it that separates us from animals. Last, remind them no matter what. No matter the time of day or night. If they need you, like really need you. That you will be there for them and mean it and stop taking your anger out on kids. Mr.B.” —

“The answer sure as hell is not on Reddit.” —

“Make gun ownership come with a skills test similar to a drivers license, with the need to recertify/renew – if someone is no longer safe to operate a weapon, remove it. All weapons need to be registered – like a car. A buy back program for surrendered weapons with an amnesty period. Significant penalties for unregistered weapons. Restrict access to semi-automatic weapons and bulk purchases of ammo for use outside of shooting ranges. Enforce national restrictions on people with DV charges, restraining orders, felony charges (up to a certain number of years after finishing their sentence), and mental health issues as not being eligible to have a gun license. Significant/increased penalties if someone uses *your* registered weapons illegally. Improved mental health services with early intervention programs for disaffected teens. Pairing police departments with mental health response teams to manage escalations more effectively.” —

“It’s unbelievable how far down you have to scroll here to get the obvious answer ‘gun control.’ They just don’t want to hear it.” —