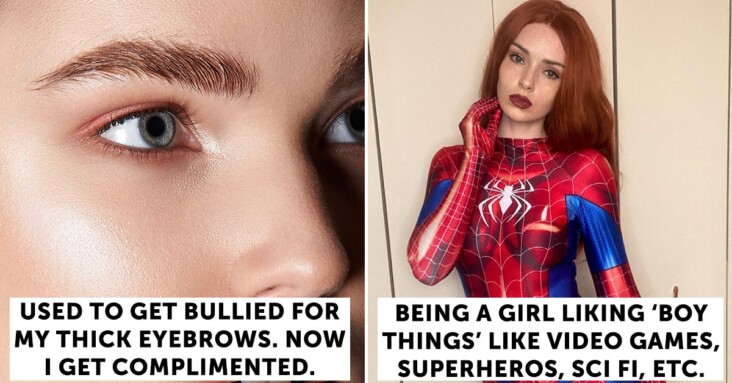 Getting picked on for something you love or something intrinsic to who you are can be one of the toughest aspects of everyone’s school years. It seems like no one escapes mockery for something, whether it’s just in elementary school or all the way through high school.

But it’s also pretty common to see the same things you and your friends got mocked for growing up turn into a trend years and years after you’ve moved on to your adult life. Who could have predicted that being a comic book nerd would become mainstream after the rise of the Marvel Cinematic Universe? Not the kids getting shoved into lockers for spouting off Spider-Man trivia, that’s for sure.

These experiences differed for everyone, experience school years in different eras, so Redditors have been swapping stories about what, exactly, they got bullied for growing up that’s now become a popular trend.

Knowing how to use a computer.

I used to get bullied for my thick eyebrows. Now I get complimented. Weird to hear “I like your eyebrows.” Never thought that would be something to compliment.

Wearing hand me down clothes. Now it’s “vintage” and “cool” to shop at places like goodwill or secondhand stores.

Now when a new Marvel movie or show comes out, I’m the guy everyone turns to for the backstory on their new favorite character. Time was I got shoved into lockers for knowing this stuff.

Being a “nerd”. Programming computers, playing D&D, playing musical instruments and building stuff out of electronics and/or mechanical components.

Video games. They took a huge jump in popularity from now I was a kid, and now all my high school bullies are posting about animal crossing.

We played Magic the Gathering the in Library during high school lunch because it wasn’t worth it to play in the cafeteria. You just… didn’t know how the other kids were gonna react so it was safer to huddle away from the masses lest you evoke a negative response.

My freshman year of college in the early 90’s my roommates all made fun of me and called me a hillbilly for wearing flannel/plaid shirts. Then Nirvana and grunge blew up and it was a sea of flannel as far as the eye could see!

Comic books. Like, I had a cool symbiote Spider-Man shirt. But I didn’t dare wear it in school. Now there are cheerleaders wearing Thor shirts, and people on the street know who the Guardians of the Galaxy are.

In the early 2000s, MTV did a limited show where they interviewed cosplayers at cons and called them “weirdos.” But now everyone and their mother turns into fangirls whipping out their phones to take pics of people cosplaying their favorite characters.

My lunches- when I was in kindergarten my mom used to pack me some bento boxes- rice, seaweed, tea egg, some meat, and veggies. All my classmates and sandwiches, so they made fun of my lunches that required a spoon and fork instead of handheld food. Now my coworkers pay over $10 for the same bento boxes my mom used to make me.

My hair. I have tons of it and it’s very curly. Sometimes my cousins would call me Marge Simpson. Then natural hair care actually became a thing and I learned to embrace my hair. Now it’s my signature. I get stopped a few times a week (sometimes a few times a day) by people to tell me they love my hair.