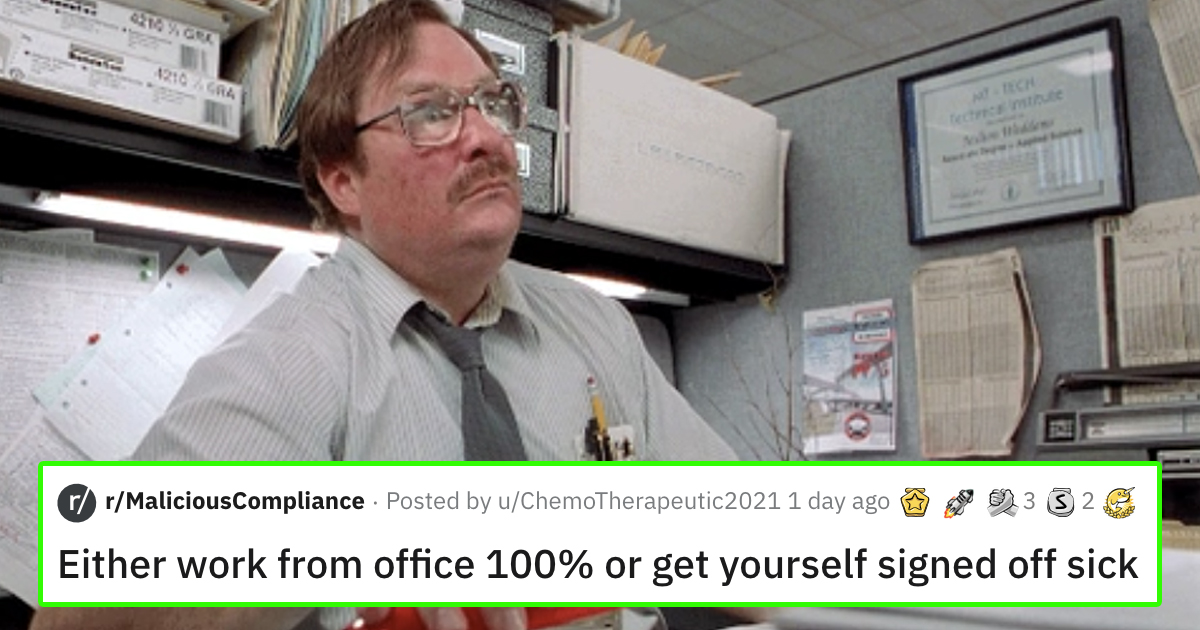 We’ve all heard tons of stories about workers leaving their places of employment with some sweet, sweet justice on their ways out. They’re dang satisfying, right?

u/ChemoTherapeutic2021 recently shared a story on Reddit that hits all the right satisfactory buttons about maliciously complying with stupid work rules.

OP explains that he worked for a company for several years. During WFH, they all worked from home, but the second it ended, the boss-man wanted everyone back.

I was working for a number of years in a tech company — always deemed a top performer. During the pandemic we were all working from home. The moment the government stopped mandatory WFH, my boss said we all had to be back at the office.

Meanwhile, OP had developed a serious health problem and wanted to limit his time in the office slightly. The boss agreed, but reneged on it and wanted a doctor’s note.

I developed a very serious health issue (not work related) and I asked my boss if I could work 2 at home 3 in office weekly until surgery in 2 months . He said yes , only to next day tell me that he has thought about it and he wants a letter from my doctor since “either I’m sick or in the office”.

OP pointed out that legally, the job must give reasonable accommodations for medical purposes. The boss said “get a lawyer”. Yikes.

I explained my medical diagnosis and that the law mandates reasonable accommodations. He repeated his request and that maybe I should see a lawyer or resign. Fine !

His medical team had him placed on sick leave for nine months and the company had to pay his full salary.

I got signed off sick… for 9 months since my medical team said that there is no way I could be working without accommodations … during this time my boss had to continue paying my full salary. Then when the sick pay period was coming to an end, I did go and talk to a lawyer …

Sick leave ended and OP got a lawyer and sued. Boom.

And sued the company for disability discrimination / refusal to make reasonable accommodations … and won. What would have cost them nothing to accommodate ended up costing them a six figure amount.