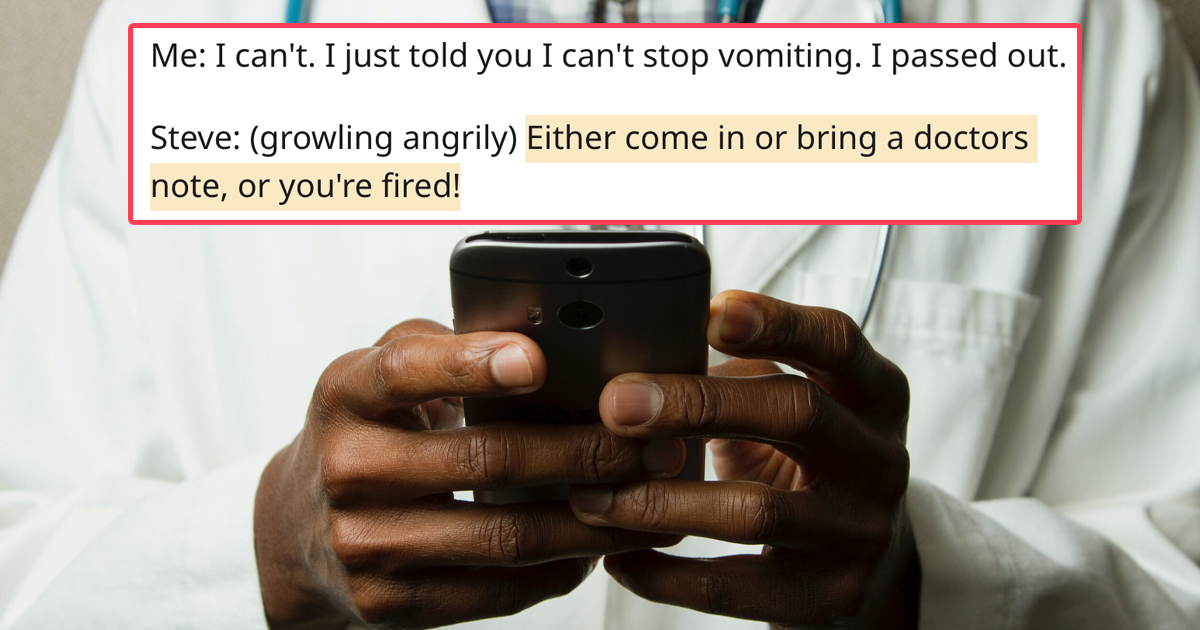 Here’s one for the books, especially after the year we just all had:

When Reddit user u/kathjoy felt she was suffering from flu-like symptoms, she told her manager she needed some time off. That’s legal. That’s permitted by law. There is nothing wrong with staying out of work to handle your health.

But the manager threatened to fire u/kathjoy without a doctor’s note. So instead of asking for two days off, they got two weeks and the manager had a disciplinary hearing.

When I was in my early twenties, I worked at a supermarket. I should note that I was a pretty reliable employee. I was never late, in fact, I often got in early, and I rarely called in sick. At the time this happened, I had not called in sick for 9 months, and even then, the manager had sent me home.

I had been up all night, swinging between burning hot and freezing cold so I was obviously feverish, and I had been throwing up ‘at both ends’ shall we say. At one point at about 2 am I was on the toilet, with my head in the sink, utterly miserable. I must have passed out because the next thing I knew I was lifting my head off the sink and it was 7 am. I was due to start work at 12 that day but that obviously wasn’t going to happen.

So I called up the manager. Let’s call the manager Steve. Steve was known for being a real a-hole. He never believed anyone who called in sick except his best buds (usually other managers, never lowly staff), but often called in sick himself (a lot of the time we knew it was because he was hungover and not actually sick). The conversation went as follows:

Me: I don’t know. I think it might be the flu. I’ve been up all night being sick, and I have a fever.

Steve: Don’t be stupid. If you had the flu you’d be completely knocked out. I need you in. Come in or you’re fired.

Me: I can’t. I just told you I can’t stop vomiting. I passed out.

Steve: (growling angrily) Either come in or bring a doctors note, or you’re fired!

In the UK, you are legally allowed to self-certify for 5 days. This means you can tell your employer you are sick and you do not need a doctors note. If you’re sick for more than 5 days, you then need a note. It is also illegal to demand a doctors note during the self-certify period.

I knew this, but I was terrified. This was during the recession. I couldn’t afford to lose my job. So I got myself dressed. Almost passed out trying to do so. Then trudged to the doctors some 25 minutes walk away.

I end up sitting in the doctor’s office for a little over an hour, which for walk-in was pretty good. I get in to see the doctor and she is furious at me for coming in. You’re not supposed to come to the doctors when you have a cold or flue, and of course I knew I should be able to self certify. She told me as such, saying I shouldn’t be here and should have stayed at home.

I then explained what had happened with Steve and how he had threatened to fire me over this and I couldn’t afford to lose my job – I was struggling as it was. My doctor turned her anger towards my manager. She asked if I got sick pay from the company, and I said yes.

Now, my manager just wanted a note confirming I was sick, but instead my doctor wrote something along the lines of this:

‘[My Name] has come to the surgery because [manager name] has insisted she come in, in spite of the fact that this is illegal and all employees are allowed to self certify. Due to being forced to make this unnecessary and highly dangerous trip when the patient is ill, has a fever of 39°C, and almost passed out in the waiting room, I am signing [my name] off for two full weeks to recover. Had [my name] been allowed to self certify as is the law, they might only have needed a few days, but due to straining themselves, they now require two full weeks. They are not to be permitted to work until [date 2 weeks later]’

The doctor said she would have signed me off longer but this was the longest she could do without requiring further evidence. So basically, instead of just being off for a few days, I was now signed off for a full two weeks, and I’d be paid for it.

I went to my place of work, at which point one of the duty managers saw me and asked me what the heck I was doing here, go home, I was obviously very unwell. I explained what happened. They agreed to help me downstairs to Steve’s office and went with me inside.

I handed Steve the note. He looked worried and tried to say ‘I wasn’t being serious about firing you.’

Well gee, when you angrily growled it down the phone it sure sounded like it.

The duty manager then declared that they were going to drive me home. It was clear Steve wanted to argue but had the sense to know he shouldn’t.

The duty manager then drove me home, made sure I was okay, then went back to work where they informed our union rep of what had happened.

Steve had a disciplinary hearing where he was given a severe reprimand and a warning. Steve tried to argue he never said I’d be fired and I was lying and just decided to go to the doctors, but the duty manager said they heard him admit to it when he said to me that he really didn’t mean it.

I felt better after a few days, and enjoyed my two weeks off, fully paid, and enjoyed the nice weather we had. Meanwhile, Steve was forced to work overtime because we were short-staffed. So thanks to the doctor, instead of being off for a few days, I ended up getting a nice two week paid vacation, and Steve was given a final warning, all because he insisted I get a doctors note.

TL;DR: Manager demands I get a doctor’s note or I’m fired, so the doctor signs me off sick for two weeks instead of 2 days to teach him a lesson.

What a doozy! u/kathjoy had a chance to chat with Bored Panda and told them that Steve was one of the worst managers she’d ever had.

“He never believed everyone about anything, and would often talk down to us and tell us how to do our job even though he didn’t know anything about the department. You could probably walk up to him holding your own head in your hand and he’d probably still not believe you needed to go to the doctor. Nobody liked Steve because he just didn’t seem to care about anyone but himself. He hid in his office most of the time and even when we put out calls for him because we needed him for a complaint, you’d usually have to call several times and he’d take his sweet time getting to you. So I guess you could say there was no love lost between us,” she said to Bored Panda.

The doctor, however, was fantastic.

“I was just expecting the doctor to confirm I was ill. I didn’t expect her to do what she did and I’m forever grateful.”

And after the whole thing went down? Steve was “kind of weird”.

“Sometimes he’d be a fake sickly-sweet nice to me like ‘Hey, it’s [you], my favorite worker’ or ‘I’m so glad you’re feeling better’ and other times he would blank me out and ignore or avoid me. But he never tried to force me to come in when I called in sick, so that was a plus,” she said to Bored Panda.

Users were glad the whole thing worked out.