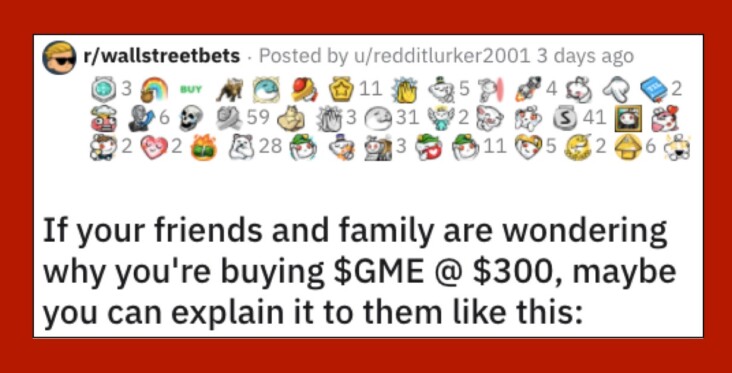 Over the past week or so, there’s been a lot of talk about Reddit, Wall Street, and GameStop, and it can be pretty confusing unless you happen to have a strong understanding of the stock market because you’re one of the hedge fund guys getting royally screwed right now.

The tl;dr explanation is that a subreddit called r/WallStreetBetts noticed that a hedge fund was making money shorting GameStop stocks and threatening to put it out of business for a cash grab. They banded together and bought up all the stocks so the hedge fund couldn’t make their money and they’re refusing to sell. That’s costing the fund billions of dollars.

BUT HOW?? Redditor u/redditlurker200 posted an explanation for people buying $GME to use if folks in their lives didn’t understand their commitment to the cause. It’s gotten an astronomical amount of awards, so I guess this parable is pretty good.

“There’s a rich kid in town,” they start. “Let’s call him Melvin. He thinks he’s really smart. He finds a coupon for $20 off the new Nintendo Switch during the holidays with no limit on number of units. This is easy. I’ll go ahead and sell the Switch now for $200 and then buy it for $180 with the coupon. Easiest $20 I’ll ever make.”

“He goes and tells all his parents’ friends at the Citadel Country Club that he can get them the new Nintendo Switch for their kids. He collects $200 each from 150 parents. He now has $30K and will use that money to purchase Nintendo Switches for $27K. He’ll have earned $3K in just a few hours. His parents will be so proud.”

“There’s another kid watching Melvin this entire time. Let’s call him Keith. Keith doesn’t like Melvin. Keith is good friends with the guys over at Gamestop.”

“He finds out that there are were only 100 new Switches shipped to the entire country. Keith and his 99 friends buy all 100 Nintendo Switches on the spot.”

“Later in the day, Melvin goes to Gamestop with his $20 off coupon and says, “I’ll take 150 Nintendo Switches please.” Gamestop guy looks at him and says, “Sorry, we’re all sold out.”

“Melvin goes to the next Gamestop. Same story. All sold out. He goes to all the Gamestops in the city and can’t find a single Switch. He won’t be able to fulfill the orders.”

“Meanwhile, Keith is telling all his friends about what Melvin promised the members at the Country Club. Nobody sell him the Nintendo Switch that you bought, no matter how much he offers you. Nobody likes Melvin, so everybody holds on to their Nintendo Switch.”

“Melvin is in trouble. His parents rich friends are all asking when they are getting their Nintendo Switch. Melvins parents are angry, but they don’t want to lose their standing in the Citadel Country Club.

They have to help Melvin gets 150 Nintendo Switches. Now remember there are only 100 Switches in the city, but Melvin has created the expectation among the parents that there are 150. This is how you get a short percentage over 100%. Melvin has promised more than actually exist.”

“The price of Nintendo Switches in the city skyrockets. Melvins parents were able to get a few units from Keiths friends, but they had to pay really inflated prices for them, first $1,000, then $2,000, now $3,000.”

“It’s nearing Christmas, and every rich parent at the Country Club is desperate for the Nintendo Switch they promised their kids.”

“They can’t trust that Melvin will be able to get them one. They all start bidding against each other for Switches. Everybody in town is in on the action now. Everybody wants to get a Nintendo Switch to sell at the country club for $10,000. Meanwhile, Keith and his friends are just hanging out and playing Animal Crossing.”

Wow! I understand now. I think. Either way, I am just watching from afar, curious about how things will go now that everyone has turned on investors, Robinhood, and basic civility in favor of stonks.