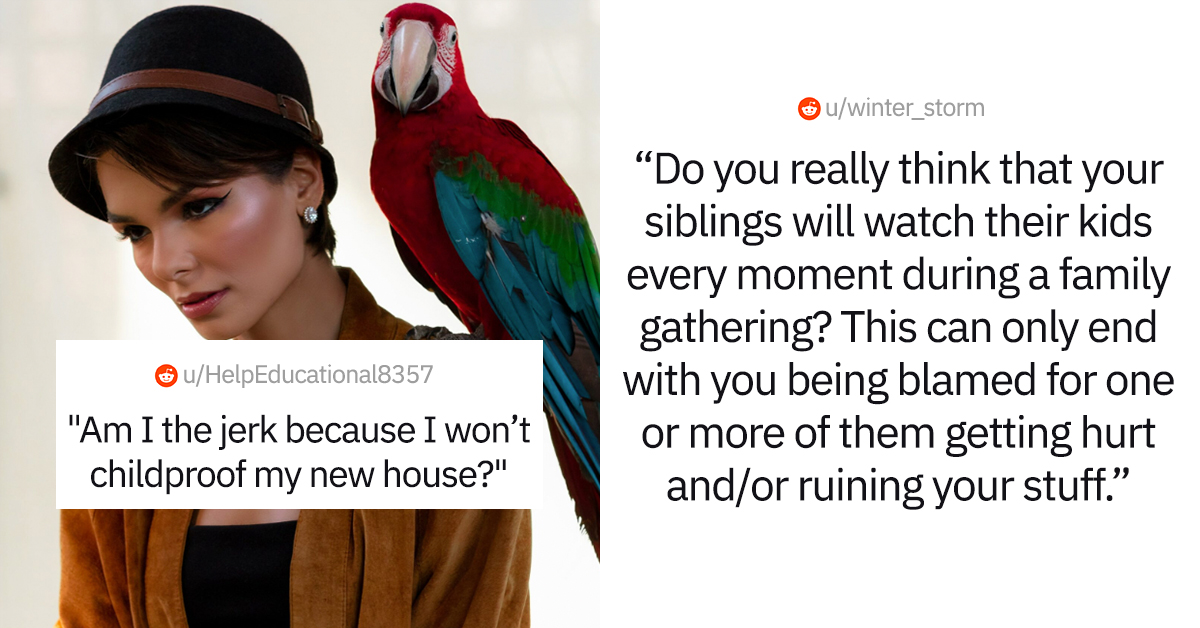 Hosting Thanksgiving is no easy task. It comes with prepping the house beforehand, making sure all the food is accounted for, entertaining everyone once they show up, and cleaning up afterwards. Needless to say, the role of “host” for family gatherings in general is usually tough no matter what.

One woman recently went viral on the subreddit “Am I The A-hole?” after wondering if she was wrong for not adhering to her many siblings requests for her home. Although OP has no children, all of her siblings have young toddlers, and they requested that she “baby-proof” her house, along with some other entitled request.

Obviously, this decision is up to the home-owner, so when she said “no,” all hell broke loose. As if that wasn’t enough drama, OP has an entire room dedicated to her pet parrots in her home, and the siblings also felt it was their kids right to go into it.

Read the full story below along with some of the top comments!

OP asked: “AITA because I won’t childproof my new house?”

I’m (f30) am a new house owner, I bought it earlier this year and moved in a few months ago.

I don’t have kids hence no need to childproof my house. Of course I don’t have swords sticking out of my walls but my stairs don’t have baby gates, etc.

Although OP doesn’t have human kids, she does have quite a few feathered babies.

I also have quite a few pets, parrots of different species. I turned my top floor into parrot space where they have a massive room to fly freely all day and all plants and treats and toys. It’s a lot of stuff. But parrots are easily stressed and they can be fragile, especially the smaller ones.

Her family had been pressuring her to host Thanksgiving since she has the largest house.

My family have been pushing for me to host thanksgiving at my house as it’s the biggest one. I have 5 siblings who all have their own kids (between 2-4 each). It’s a lot of people when you add my parents, aunts, uncles, etc.

She decided to host, despite her wishes, but only with the exception of a few house rules.

I didn’t want to do it as it’s a lot of prep work with cooking and then cleaning after but I eventually agreed but laid down some ground rules.

Three simple rules would have allowed for peace:

1. I planned the menu and everyone brings a dish so we can all contribute.

2. Bring entertainment for your kids. I’ll make one room into a quiet space where they can go and take a nap if they’re overstimulated or they can go in and play quietly but they have to provide tots and whatever their kids will need.

3. Absolutely no one without me goes to the parrot room (it’ll be locked anyway).

The siblings however, did not agree with OP’s rules.

I thought these were simple and fair but my siblings are now demanding that I baby proof my house because it’s unsafe. What if the fall off the stairs. That I must allow kids to see the parrots as they want to play with them and it’ll keep the kids quiet.

Her siblings demanded that the kids be allowed to play with her parrots.

After taking about as much as she could, OP decided to put her foot down,

I threatened that if they keep on going I would cancel thanksgiving at my house and they can host it but they keep on going. Because of this situation, I’m currently not on speaking terms with 2 of my sisters.

OP’s parents split their loyalties, and left her wondering if she was the “a-hole” in this scenario.

They keep complaining and ganging up on me. My father is on my side by my mother has my siblings side and I’m not sure anymore. Should I cave in? Am I really the asshole in this situation?

Commenters agreed that OP was NOT the “A-hole” in this situation, as it was her home after all and her parrots are sensitive creatures, not petting zoo animals.