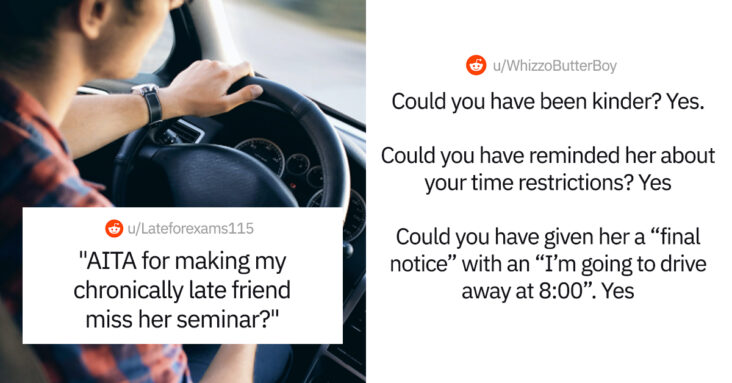 Being late on occasion is just a human mistake. Being chronically late however, is annoying and rude. It’s important to respect other people’s time and remember that not everyone’s lives revolve around yours. I have known many people in my life who are almost always late to everything, and with every minute that passes, so does my patience and respect. No one wants to start an event at a certain time and then have to waste their day away and throw everything off track just because someone else couldn’t start getting ready 20 minutes earlier.

One Redditor recently went through this exact scenario, and didn’t stick around long afterwards to let it happen again. Read the story in full below, along with some of the top comments on the post! And next time you’re more than five minutes late to anything, if it could have been avoided, apologize; or you may not ever be invited again.

My friend [25F] is constantly late for everything. Be it work-related or fun activities, she will always be at least 15-20 minute late. She does not have a car, and so oftentimes I [25M] will pick her up from her house (I work at a university and she is a PhD student there, and her place is along the way for me).

Last time I offered her a ride to work, she ended up being 20 minutes late after I’ve already arrived at her place. Because of that, I ended up being late for work. She is always very apologetic about her lateness, but never changes.

This week she was supposed to give a seminar at the university which is a crucial part of her PhD program. She asked me if I could give her a ride to work that day. I told her sure, but that I was picking her up at 8 AM and she must be there exactly at 8 AM, and not a minute later. She chuckled, but I told her I wasn’t joking, and she promised that she will be there.

The morning of her seminar, I drove to her place and got there at 7:55, and texted her that I was here, and she told me should would be out in “just a minute”. At 8:00, there was no indication that she would come out (and she didn’t text anything), so at 8:01, I drove off.

At around 8:20, she called me asking me where I was. I told her I was at work and that I wasn’t joking when I told her that she had to be ready right that minute. She started screaming and crying over the phone, and told me that she was having a hard time that morning couldn’t be ready right at 8 AM. She then begged me to come back to pick up her, as her seminar is at 9 AM and she needed to be at the school before then. I could’ve done it quick enough to pick her up and drop her off without affecting my work, but I decided I didn’t want to do that, and told her that I won’t.

She was crying and hyperventilating at that point and said she’d promise to never be late for anything else again, and reemphasized that this seminar was crucial for her PhD and that she absolutely cannot miss it without severe consequence. I responded “oh well”, and hung up. I then went about my day at work normally.

I feel like could’ve went back and picked her up in this scenario since it wouldn’t have been detrimental to me and at the same time this was something very important for her. On the other hand, I feel like this should be a wake-up call for her chronic lateness.

Redditors agreed that OP could have been a little nicer when dishing out his consequences, but the verdict was that overall, he was not the “A-hole.”

An updated edit to the post revealed that OP and his “friend” were in a “right person, wrong time” sort of situation…

EDIT: thank you everyone for the kind words. To answer a few common questions: Yes, she did miss her seminar and apparently got into big trouble with the school. I don’t think it’s going to ruin her PhD, but there definitely are consequences. Regarding our friendship, it was already on its way out when this happened, and now we haven’t talked at all for a while.