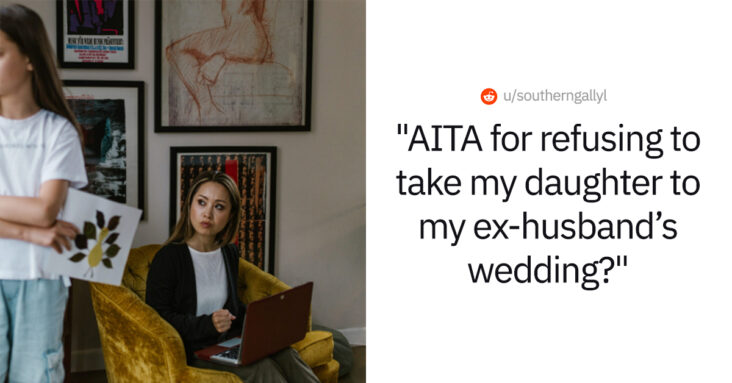 Not having the desire to attend your ex-spouses wedding isn’t an absurd notion. Sometimes we can’t even think about our past relationships without wanting to scream, much less be at their divine union with somebody else. Furthermore, going to the wedding of an ex who cheated on you with the bride-to-be sounds like a personalized circle of Hell.

Co-parenting is tough as is, and much more so when you and your child’s other parent are separated. You have to be careful of every decision, big or small, that you make regarding their other parent, as it could affect how your child sees them and/or you. A recently divorced mother came to the “AITA?” subreddit in hopes of some advice regarding a tough situation.

Her ex-husband, who had cheated on her and was marrying his affair partner, conveniently made it “impossible” for their daughter to get a ride to the wedding- from anyone but OP of course. Obviously, this didn’t sit right with her and she told him “no”. Now she’s wondering if she was in the wrong for making this decision. Read the full post below, along with some of the top comments!

OP asked Reddit: “AITA for refusing to take my daughter to my ex-husband’s wedding?”

My (42F) ex husband (45M) and I were together for 20 years. We had a beautiful daughter together, Joceline (14F). We got a divorce 5 years ago due to infidelity on his part. I was devastated. He was the love of my life and he betrayed all of the trust and loyalty we had built up. To make matters worse, he ended up in a relationship with the woman he cheated on me with. They got engaged one year later and are set to be married in two weeks. Honestly, I still am heartbroken over my divorce. It’s hurtful to me that we were together for 20 years, and he could just go fall in love with someone else, as if I was nothing. However, Joceline was only 9 when we divorced, and he’s a great father so I would never want to come in between their bond. Joceline loves his fiancée as she’s very sweet to her, but she doesn’t know the reason why her dad and I divorced, I want to tell her when she’s a bit older and he doesn’t want to tell her at all. Anyways, I compromised with him that Joceline could come to the wedding, but that he would have to provide the transportation to and from the wedding, as I want no part of it. I don’t want to drop my daughter off at his wedding, I don’t want to see all the decorations and the happy guests, it’d just be too much for me. I didn’t tell him all of that obviously, but he agreed.

Today he calls me and asks if he can ask for a huge favor. It turns out that his future in laws are flying in the morning of the wedding, and he has to go pick them up, therefore he can’t pick up my daughter the day of and wanted to ask if I could take her. I said absolutely not and asked why he can’t pick her up the day before when she gets off of school. He said he doesn’t want to make the drive twice, and that he will likely not have time as he has to prepare for the rehearsal dinner. I asked why can’t the bride pick up her parents, he said she’ll be getting her hair done and won’t be able to. I laughed and told him there was no way I’d take my daughter, and that he’d have to figure it out.

Boy why did I say that. My daughter ran downstairs crying, face beet red 10 minutes after my conversation with her dad, calling me terrible and accusing me of not wanting her to spend time with her dad. I told her that’s not the case and she demanded to know why I couldn’t take her, I couldn’t give her an answer and she ran upstairs crying. Now I’m getting messages from his family calling me “heartless” and “cold” and a “bitch” for trying to “ruin his special day over a relationship that is long over”. My family understands my point of view. But I feel terrible that I’ve upset my daughter. I don’t know what to do. AITA? Should I just put aside my feelings and take her?

Commentators agreed OP wasn’t the “A-hole,” but shared a confusion about how the ex-husband wasn’t more prepared. Some assumed he was scheming towards OP the entire time. Below are some of the top comments on the post!