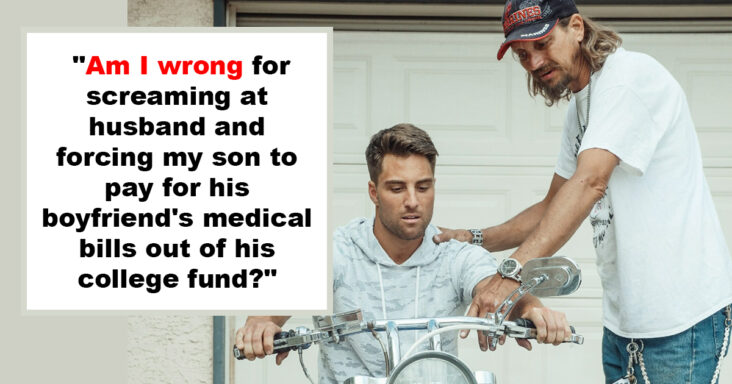 There’s a reason motorcycles have coined the nickname “donorcycles” by ER doctors. Of the 109,000 accidents in the year 2021, 62,000 involved a collision with a motor vehicle. While 2,881 crashes were fatal, 42,000 resulted in injuries and 18,000 in property damage. It takes a trained rider with experience to “safely” top out at the usual speed limit of 75 mph, so it’s typically common knowledge that teenagers and more uncoordinated people shouldn’t typically ride a motorbike unless they show the responsibility necessary.

On a recent Reddit post to the subreddit “Am I The A-hole”, a very concerned mother asked for opinions on her punishment for her 16 year old son after he crashed his motorcycle while street racing. Her son happened to have his 15 year old boyfriend on the back, and racked both families up for some serious medical bills. This OP decided that the most formidable consequence was having her son pay for his boyfriend’s medical bills with the money in his college fund.

Check out the full story below and let us know what you would have done or if you have any advice for the anti-motorcycle mothers of the world out there.

“He started crying saying he was sorry and that he just wanted to know if Clark was okay.”

OP asks: “AITA for screaming at husband and forcing my son to pay for his boyfriend’s medical bills out of his college fund?”

My husband, against my wishes decided to get our oldest “Bryan” (16M) a motorcycle for his 16th birthday a few months ago so they could go riding together. It was a surprise last minute gift that I didn’t know about. They also apparently went and got his license for it behind my back.

I couldn’t just take it from him without looking like the bad guy since he already had it so I laid down strict rules. He was supposed to only ever drive the speed limit and he could only drive it with his dad around and he was supposed to have no passengers on it.

Me and my husband are separated right now and he’s staying in a nearby apartment until we figure out what we’re doing with our marriage. Bryan stays with me a week and stays with his dad the next week. Last Friday while Bryan was at his dad’s, I get a call from the hospital saying him and his boyfriend “Clark” ( 15M) had been in an motorcycle accident. I rush down to the hospital and find Bryan and he’s kinda banged, a gash on his forehead, some cuts and bruises and a concussion. I asked him what happend and he wouldn’t look at me until he finally got up the nerve to tell me they wrecked on his motorcycle while he was taking Clark home from baseball practice and decided to street race some other guy. He lost control of his bike and they flipped over.

Now I was steaming and asked why the hell he was out riding his motorcycle without his dad and why he would of done something so stupid especially riding with someone else. He started crying saying he was sorry and that he just wanted to know if Clark was OK. I went to check and found Clark’s parents who were pissed and they told me that Clark had broken a few ribs and his leg and two of his fingers. I promised to take care of the medical bills which calmed them down some.

My husband showed up and tried to explain and apologize for letting Bryan ride around with his bf and I just went off on him in the middle of the hospital yelling at him that this is the reason why we were separated and that he was an irresponsible parent who never took anything seriously. I went to talk to Bryan, still mad, and told him that he’d be paying for all of Clark’s medical bills out of his college fund and any money he’d been saving. Since then I’ve been getting calls from my husband and my inlaws about how I was being a b*tch to my husband and that I shouldn’t possibly be taking college away from Bryan because of a mistake. AITA?

There were some mixed emotions in the replies to the OP: