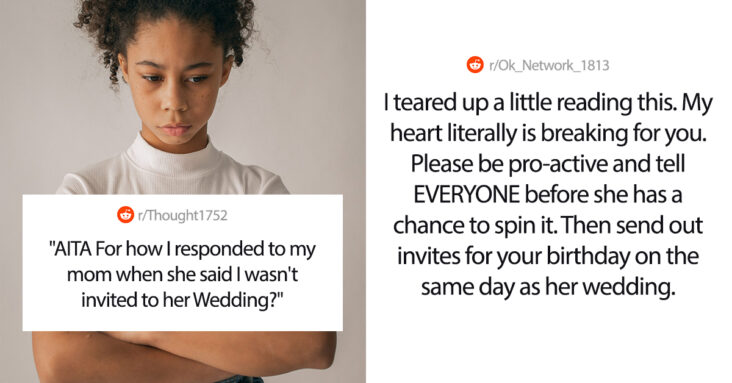 A mother’s love is something not every one has the priveledge of experiencing. In a perfect world, our mothers would do anything and everything they could to give us the fairness and respect that any human would long for, but unfortunatley we don’t live in a perfect world, and sometimes mother’s go as far as telling their 15 year old daughter that she’s no longer invited to her wedding and that her birthday the day of is irrelevant.

The recent post by u/Intrepid-Thought1752 in the “Am I The A-hole?” community, questioned whether our hurt Redditor (OP), a 15 year old girl, was wrong for calling her horrible mother out on her BS. Obviously she wasn’t, but read on to see exactly what not to do with your children.

OP asks “AITA For how I responded to my mom when she said I wasn’t invited to her Wedding?”

I (15F) am my mother’s (35F) only daughter she has from her previous marriage. She has three children the rest being (18, 16) boys, this is important to know.

Last week my mom was talking with one of her friends about the color she wanted the bridesmaids dresses to be. My mom had been planning this wedding with her new boyfriend for the past two months or so, they have been engaged for about one year. The wedding is in December and on the day before my birthday, me and my mom have been planning a party for me around the same time she was for the wedding. She insisted it was alright and that her boyfriend and her would go on their honeymoon the next day.

While she was talking I asked her when we were going to look for my dress since she had asked me to be the flower girl. I could see the disappointed look on her face when I asked her which confused me. She responded only a few minutes later and said “We’ll talk about it later.” A few hours later my mom came to me. I thought she was going to talk about the dress situation but instead she sat me down and explained how her new boyfriend thought it’d be a better fit for their three daughters to lead the wedding.

Whatever, I was cool with that, but it’s important to note that my mom had always wanted all girls, I was a girl but I had looked too much like my father which caused a strain in our relationship. My dad explained to me how my mother had postpartum when she had me and just couldn’t connect with me because of it. So when she gave birth to my three younger step siblings who all looked like her(triplets 6yo) she was obviously overjoyed, it hurt to see but I was happy for her. My brother’s had a similar experience but were significantly better because they looked more like her. I know this is an over dramatic thing to say but sometimes I feel like because my mother didn’t feel as connected with me at birth was because I was a letdown right out the gate.

After she was done I asked her again about the dress because I still didn’t have one, again that same disappointed look on her face came before telling me I wasn’t invited to the wedding, simply because her boyfriend thought I would upset his family because I was from my mom’s previous marriage and he didn’t like my dad. She also explained how my birthday isn’t happening either due to him wanting to go on their honeymoon right away. It turned into a screaming match with me yelling “I’m sorry I don’t look like you enough for you to love me. I’m sorry you were too conceited for you to get over the fact I look like my dad.”

I was kicked out by her boyfriend within the same hour because she had cried to him about what I said. All my brothers know what happened and have now refused to go to the wedding which upset her even more, though I don’t care about how she feels right now. My brothers had an actual relationship with her and I probably just messed it up by letting my anger get the best of me.

A few recent updates provided some more context to the messed up situation:

Edit: I live with my dad full time, there isn’t any custody agreement that I know of. I usually visit my mom on my own free will or when she asks me to come over, so I’m not obligated to go over there. My parents were only married two years prior to having my second brother, divorcing after his birth. They dated after the divorce as a way to make up with each other but it didn’t work out but they had me.

Edit: All my brothers are full blood, the girls my mom had are half blood. I said step because I don’t consider them to be related to me because I’ve never been in the room with them for more then five minutes due to my mom not allowing it. My brother’s were only invited because her boyfriend actully likes them and his family getting pissed that I’d be there was an excuse to exclude me. I honestly don’t care anymore about situation seeing as how my brother’s have my back. As for my dad he’s been threatening to call CPS but I’ve talked him out of it because I dont want to get the three girls involved despite there being no relationship.

Everyone felt bad for our OP- after all what kind of mother is so self-concieted that she would completely seclude her youngest from something as stupid as a wedding? Here were some of the top comments:

NTA, in any way, shape, or form. This makes me so sad for you. Your mom, on the other hand, and her fiance are MAJOR assholes.

I’m relieved that at least the siblings took her side.

NTA. I teared up a little reading this. My heart literally is breaking for you. Please be pro-active and tell EVERYONE before she has a chance to spin it. Then send out invites for your birthday on the same day as her wedding.

Definitely! My heart is breaking for you! The only good in this situation is that your brothers are supporting you and you live with your dad. Mom is only mad because she knows she’s wrong and you and your brothers have the backbone to stand up to her.

Sweetheart, spend your birthday with your dad and brothers. Hopefully, where you live, you’re old enough to choose whether or not to see your mom.

Please don’t think this is about you – it’s not! Don’t let her toxic behavior get into your head. We can’t choose our family, but we have the choice to allow them into our lives.

Holy crap, you are absolutely NTA. You have every right to be upset. Your brothers have every right to be angry at your deliberate exclusion, and honestly it doesn’t sound like they’re going to want a relationship going forward. I’d love to tell you it’ll be ok, but I suspect the only way is to go low to NC for the next little while. Make her come to you. If she doesn’t, well it’ll hurt but you’ll be better off without her.

Mothers, be good to your daughters. They look up to you and love you more than anyone in the world, respect and cherish that. Let us know what advice you would give on the situation!