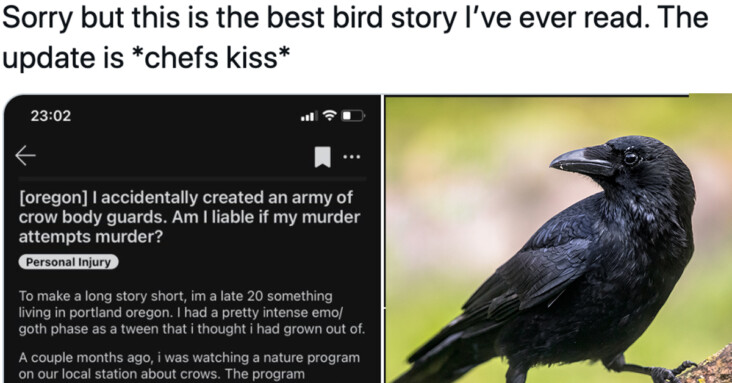 This may be one of the best stories on Reddit, especially on r/legaladvice.

That’s where people go when they’re hoping some lawyers might be interested in handing out free advice. A lot of people actually were interested in helping Redditor u/cranne, because her story is so unique.

She says she’s living in Portland, Oregon, and was watching a nature program about crows at home:

(Some of OPs comments are edited for grammar and clarity.)

The program mentioned that if you feed and befriend them, crows will bring you small gifts. My emo phase came back full force and I figured that I was furloughed and had lots of time- so why not make some crow friends.

My plan worked a little too well and the resident 5 crows in my neighborhood have turned into an army 15 strong. At first, my neighbors didn’t mind and enjoyed it. They’re mostly elderly and most were in a bird-watching club anyway. They thought the fact that I had crows following me around whenever I go outside was funny.

Lately, the crows have started defending me. My neighbor came over for a socially distanced chat (me on my porch here in my yard) and the crows started dive-bombing her. They would not stop until she left my yard.

They didn’t make physical contact with her, but they got very close.

Her question for the legal crew was if she’d be held liable if a crow really messed someone up. She added that they’re not aggressive all of the time, only on her property or close to her—and she definitely hasn’t trained the birds to attack. They’re just doing it.

Lots of people weighed in, but the most useful bit of advice might have come from u/hiyadoll89, whose partner is an ornithologist:

The crows are “resource guarding” and this wasn’t the only comment that encouraged the OP to try and socialize her crow army better with the neighbors or wean them off snacks so they’d disperse. She went with the former and posted an amazing update two months later.

First of all, she checked in with the local Audubon society, who also suggested that she encourage the neighbors to feed the crows too, and make friends:

The plan worked and the crows are now a beloved part of the community. There have been no recent dive bombings.

Most amazingly, the crows may have legitimately saved my neighbor. Our city had a pretty big ice and snow event recently. Like i said in my last post, most of my neighbors are older. One of my neighbors was walking down his steep driveway, slipped, and couldnt get back up.

The crows started going ballistic and were making more noise than we have ever heard. A different neighbor went outside to see what was up and found the gentleman in his driveway. Neighbor is mostly ok! Just some serious bruises.

Needless to say, the crows have been getting some high value food since then.

Life-saving neighborhood crow watch! Can you imagine being laid out in your driveway, circled by shrieking crows? Still, don’t try this at home. We can’t have warring crow armies, there’s already too much going on.