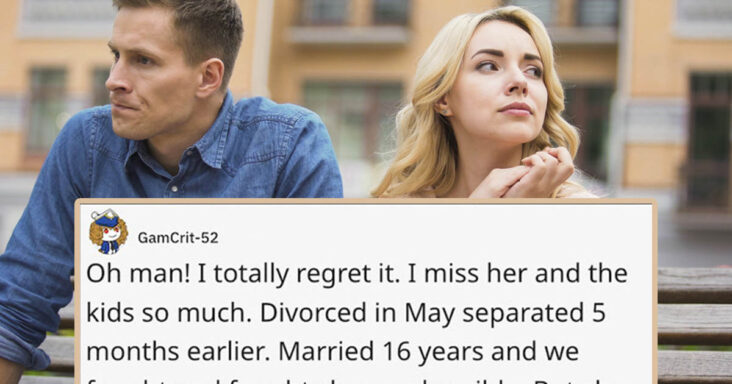 Divorce can either be an absolutely terrible experience, or a liberating decision that leaves you better off. The gray areas in between are generally filled with regret about getting divorced, sadness, financial ruin, and child-custody court hearings (among other depressing things). I’m sure you’ve heard your fair share of divorce horror stories in your time. I know I have.

Throughout the years, people have shared their stories on Reddit. Sometimes, these posts can be informative or funny; sometimes they can be filled with drama and leave you in disbelief. If you’ve ever lingered for a little too long on Reddit, you have most likely stumbled across an insane story that you couldn’t tell whether it was true or not.

Pulled from Reddit threads, 12 people came forward with their regrets about getting divorced.

The types of posts Redditors share vary widely, but over the years, a few sad souls have come to the platform to reveal their deepest secrets and regrets. In this article, users discuss why they wish they hadn’t gotten divorced. The subject is valid, though not often spoken about due to the vulnerability it takes to open up about such topics.

Others who posted their perspectives to Reddit regarding their divorces claimed that although it was hard, it was a decision for the better. So, if you want a few pointers on what not to do during a marriage, or what to do after a messy divorce, check out some of these stories below!

I was very unhappy and blamed him for all of it, when it was just some of it. I should have stayed and tried harder to make it work. I’ve dated a couple of people since then and I only now realise how compatible I was with my ex and how rare that is.

I regret it every day but it wasn’t my decision. My ex has paid an enormous price for the breakup. My two oldest sons don’t speak to her. I don’t think she regrets it at all but she likely wishes she waited a while longer.

we broke up mutually out of wanting different things and are still friends. Both of us were stubborn and wouldn’t change our outlook on the timeframe for what we wanted. Aside from that we were happy together, so yeah, I couldve changed for her, she couldve for me.

I regret it. After being separated for nearly three years, my true feelings were suppressed by anger that the effort wasn’t there. Divorce just seemed like the right thing to do at the time. I am still in love with him and I always will. Our divorce was finalized in March of this year. If I could take it back I would.

I totally regret it. I miss her and the kids so much. Divorced in May separated 5 months earlier. Married 16 years and we fought and fought she was horrible. But she was an alcoholic and I was a junkie. But we also had a lot of laughs! I am a comedian, she is a realist. Clean now and we are friends I guess?

I cheated on him. I was sure that was the end of it, and needed to punish myself. He was willing to try to work through it, but I thought the damage was done, and that I needed to move on to find happiness. I later find out that I had been depressed for a while, and might have cheated as a desperate act of “trying to make something happen”. I have never regretted a single thing more in my life.

I do wish I had been given the opportunity to make it work out with the ex. We had a pretty good marriage by most standards, but as with most long term marriages, we slowly drifted apart until we shared very few interests. By the time he asked for the divorce, a few months shy of our 19th wedding anniversary, he’d already emotionally detached. There was no turning back for him.

Not me, but a kindly older gentleman that I knew had divorced his first wife when their daughter was eight. He eventually remarried and had a son. He told me once if he could do his life over again, he would not have ever had that divorce. He loves his current wife and loves his son, but he said, “No matter the troubles there were in my first marriage, losing them was not worth the pain and suffering the divorce caused my daughter.”

My…abusive narcissist father served my mother divorce papers to “teach her a lesson about how much she meant to him and would help her appreciate him more” even though he didn’t really want a divorce at all (his words) and she went through with it. They’ve been divorced 10 years and she is incredibly happy and he is remarried and still hopelessly in love with and obsessed with my mother. Best thing that ever happened to her.

I thought it wasn’t working and that I didn’t love her anymore. Now in retrospect, I realise it was different. Basically what happened is that we were both so similar that we even had kind of the same mental issues (nothing too serious). After I did a psychiatric treatment and got better she started getting worse (like a late contagious disease heh). I thought that it was just her being a bitch. After we divorced she did a psychiatric treatment as well and she went back to being the woman I fell in love with but after failed attempts to get back together the relationship just deteriorated and there was no way we could go back to being a couple.

My biggest regret is that I thought the grass was going to be greener and it is most definitely not. I wish I had tried harder to keep the marriage going instead of throwing it away thinking I would easily find somebody else to love. I have been divorced six years and it is very lonely.. he was very unmotivated and I was exhausted from carrying the household alone and that was my main reason. But I think if we had both tried hard or we could’ve made it work. Ultimately we were married 21 years. Now I am 58 and I feel like I’m never going to meet somebody else and my older years with. It is quite depressing.

I initiated the divorce because I thought that my depression was genetic, and we both really REALLY wanted kids. I couldn’t justify forcing a kid to feel the way I do, so I told her that I wasn’t going to have kids. She wanted to be a mom so badly, so I told her that maybe it would be best to divorce so she could find someone who she could have kids with. After the divorce I found out I have leaky gut syndrome, which basically means my intestines don’t digest certain foods correctly and let’s bad things into my blood stream which caused my depression. After fixing my diet and finding the right medication I’ve been so much better. I tried to fix it with her but I had damaged our relationship beyond repair in her eyes.