There’s a popular subreddit called “What Is This Thing?” and it’s full of people sharing the random things they find, but they need help figuring out exactly what they discovered.

It’s mostly really cool and interesting stuff, but sometimes it’s creepy. Thankfully, there are people there to help discuss their own experiences in similar situations.

Here are some of the creepy discoveries people needed help identifying:

1. “Covert Sticker On My Mailbox Keyhole Every Month?”

100% thieves monitoring who is home and not home.

Every time you see them, remove them all. Warn the neighbors.

Leave a note above the mailboxes for the neighbors and whoever’s casing. They’ll move on.

Came here to say this.

Warn all the neighbors then leave a big clear sign saying, “We have spotted tampering with the mailboxes and are monitoring the area” … Hopefully they’ll move on.

2. “A friend of mine has this on her key rings. I asked her what was it and she didn’t know. I felt it was a tracker but after she told me her boyfriend told her never to remove it off the rings, I definitely concluded it’s a tracker. Correct me if I’m wrong.”

Yep, it’s a tracker, but not in the way OP thinks. It’ll make noise if activated via bluetooth. Very short range, helps you find your keys/wallet.

That went swiftly from invasive to thoughtful.

3. “What is this small built-in feature next to the toilet in LA?”

It’s for Hasidic Jews, they fill it with toilet paper squares because of the Shabbat.

…Both tearing and “measured cutting” are forbidden on Shabbat. I had no idea and Googled as well. Paper is ripped in advance and placed in the box. There is now also apparently a brand of toilet paper that comes in sheets so that tearing is not required.

4. “Ammunition with a weird shiny tip, could be 30mm? Worried If inert or not. Found on a glacier in Swiss.”

Do not handle suspected UXO under any circumstances.

I agree, only [took] two pics so I could post and convince the person who own it to get rid of it in a proper way.

You must have missed this part.

What you have there is a projectile from the 35×228 mm Oerlikon Flab Kan 63/90 (Same gun that is on the Flugabwehrkanonenpanzer Gepard).

From the fact it has an aluminum dummy fuze (the large cutouts make it obvious there is not enough space for the fuze mechanism) and it looked like it was painted bluish-grey, that makes it an “Übungsgranate” – a Target Practice shot. Be advised that doesn’t mean it’s inert, because even a TP shot can have active pyrotechnic devices like tracers and I can’t see the bottom of it.

My advice is, as always, call EOD (Explosive Ordnance Disposal, AKA the “bomb squad”) and they’ll sort it for you because you don’t do demining over the internet.

German is a beautiful language.

5. “This was next to my car this morning. Is this part of a lock pick set?”

Yup, and it’s your lock pick now, the gift that keeps on taking.

6. “What is this figurine spotted at a friend’s parent’s home?”

Here in my city in Mexico, we have a tradition called “Procesión del Silencio” where people walk a specific route donning this kind of robe, sometimes in different colors. Sometimes white, sometimes black, sometimes purple or red. It refers to a march in silence to pay respect to the death of Jesus Christ, during Semana Santa (when he died according to the Bible).

I remember watching it and sometimes participating as a kid with my very Catholic grandmother and other family members, and it always was quite an eerie experience. Some years later, after learning about the [Klan] in the US, it felt weird to have people dressed like that walking around once a year lmao.

I believe it originally comes from a very similar tradition from Spain, which evolved over time as it came to Mexico, and well the rest is history.

So it’s not racist? Everyone can sleep easily, right?

No, not racist, it’s a religious thing. The [Klan] actually stole this wear from the Church.

7. “Found off the coast of Corolla Outer Banks, NC. It’s definitely some kind of metal and very heavy. Any idea what it is?”

This is not an anchor link, it’s something much more interesting, much older, and much rarer. I’m 100% certain it’s a mast cap from a small sailing ship of some kind. The stepped masts of tall ships are built in sections to get the height they needed because one big single piece of timber would be difficult to work with, not to mention you don’t get fir trees tall enough for the largest ships.

What you found is the mast cap in this image, which along with the crosstrees below them secured a section of mast to the section below it. (The one in the drawing is an older one carved from a single piece of oak, yours is later and most likely cast iron or cast steel.) This is how the topmast was joined to the lower mast, the topgallant mast to the topmast, and the royal mast (if there was one) to the topgallant mast. The top of the lower mast would be square, and the bottom of the next section would be round. This allowed it to be located by the crosstrees and mast cap to prevent the mast from rotating in place. That’s why one side is a large circle and the other side is a smaller square. The filleted edges on the front of the square side date this pretty late as tall ships go, probably from the early 1900s.

Let me know if you have any other questions, I’ll do my best to explain anything else about it or tall ships. Please don’t scrap it, it’s a pretty interesting and rare item these days.

8. “What is this skull-like object? Found at an abandoned mine, South Africa.”

Additional information from the OP JayP993:

This was found at an abandoned mine site in South Africa. Found it just lying uncovered in a small ditch. No other “parts” were found near it. The texture of the skull is leather-like. The object is already well decayed. Much larger than a human skull. Coal mine, out of mining for almost 26 years.

I think it’s some kind of turtle shell. I don’t know all about turtle anatomy, but there’s a spine sticking out where you think the nose is.

9. “What Is This Weird License Plate, And What Does It Mean?”

I suspect you have found a Sovereign Citizen in the wild. The references to trust and to common law suggest something of the sort.

The car doesn’t have a license plate. Every state in the US requires a vehicle to be registered and to have license plates. The license plates are issued by the state and paid for by an individual (usually annually recurring) tax. Those taxes go toward things like paving roads, plowing and salting streets in the winter, emergency response, etc. License plates cost $100-$400 dollars a year, depending mostly on what state you’re in, but also what type of vehicle you drive. Big vehicles cause more wear and tear on the roads, so typically plates for them are more expensive.

This individual falsely believes that they have found some sort of loophole in the US Constitution or the Federalist Papers, or even (I sh*t you not) the Declaration of Independence, which makes them immune from paying either this particular tax or maybe even all taxes.

They think by declaring this using the proper incantations and magical phrases, that they somehow indemnify themselves from the cops, ya know, pulling them over, issuing a citation, and towing their vehicle… for driving an unregistered vehicle, which is against the law, no matter what magic phrases you paste on it.

10. “Metal object looking like a Thermos bottle + safe found on top of a mountain”

Found this in the Swiss Alps while hiking on a mountain. It was made of metal and had a dial on top, kind of like the one you find on a safe lock. Circa 1 ft long and approximately 1.5 lbs heavy. I’ve picked it up, [took] pictures, put it back down, and went on my way. Didn’t think much of it. WITT?

Wow, you picked it up? That’s risky. This looks a lot like UXO – a live artillery shell. I can’t identify it, and there’s no rifling band (unless it’s rusted away), but the dial on the top could be a fuse timer. Seems a little light for a shell, if it’s truly 1.5 lbs.

Don’t pick anything up that looks like this again.

11. “I found this in my bathroom today. The problem is I don’t remember seeing it there yesterday. I also live alone so I’m really scared right now. Can someone tell me what’s in this bag?”

Is your bathroom on the ground floor? Was your window open? Maybe somebody was getting rid of evidence before the police got to them.

My window in my bathroom was open, now that I think of it. It was put in my sink. Oh Jesus…

12. “Found this nightmare growing in a bottle of Crystal hot sauce. The bottle was sealed on the shelf with an 03/03/2024 expiration. Can anyone explain what’s happening here?”

If there is vinegar in that hot sauce, it may be a mother of vinegar.

Might be some form of Mycoderma Aceti from the vinegar in the sauce or SCOBY from an improper seal.

This is either what someone in the comments called a mother of vinegar or a SCOBY.

It means “Holy mackerel, look at that a** on that tomato.” Really.

You are correct. I had a coworker decades ago with that card. Old guy humor, I guess.

14. “A very light glass tube with a hole at the top and a thinner, upwards bending tube coming out from one side. Found in my grandpa‘s attic in Switzerland.”

Considering the fact that your grandad was an old farmer in Switzerland, it is very unlikely that he was a meth or crack head. These are not only drugs that would not be readily available to such a rural man, but if he was consuming them, you would have noticed. Crack and meth are very intense.

…It is likely a nasal douche.

Yes, [as] someone [who’s] had experience in my past, this is absolutely not anything drug-related. No residues or anything, it’s just dirty.

It is a nasal douche. Probably just an old one they had during a period of bad nasal activity that they put up after use bc why throw it out.

15. “This looks like a typewriter but the letters are in alphabetical order.”

It looks like a keyboard panel from a tabletop jukebox selector.

16. “Any ideas what someone left at my house party? Small green ridged brick, hole in the middle, crumbles when I scratch it.”

Note from the OP:

My title describes the thing. I’ve googled many variations of “small green brick.” I thought it might be a dog treat, but it has no discernible smell.

That looks like rat/rodent poison. Definitely not a dog treat.

It’s a brick of rat/rodent poison.

His name was Yano, the storyteller.

Looks like Teddy Ruxpin going through a psychedelic phase.

Did you say "holy carp?" Actually, it looks like a whoopin big catfish. Some have been spotted in the Ohio River as big as a Volkswagen. They're also smart and mean, so, yes get a bigger boat. 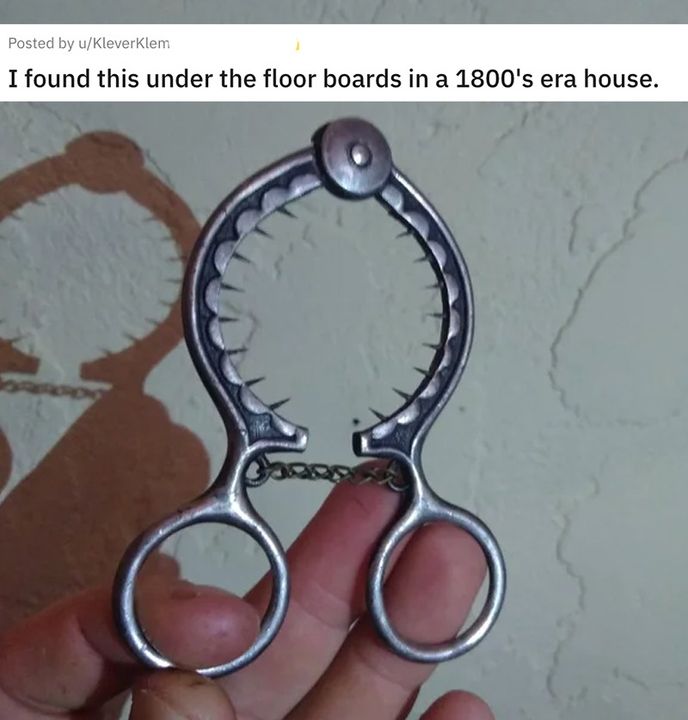 It removed the top of soft boiled eggs. 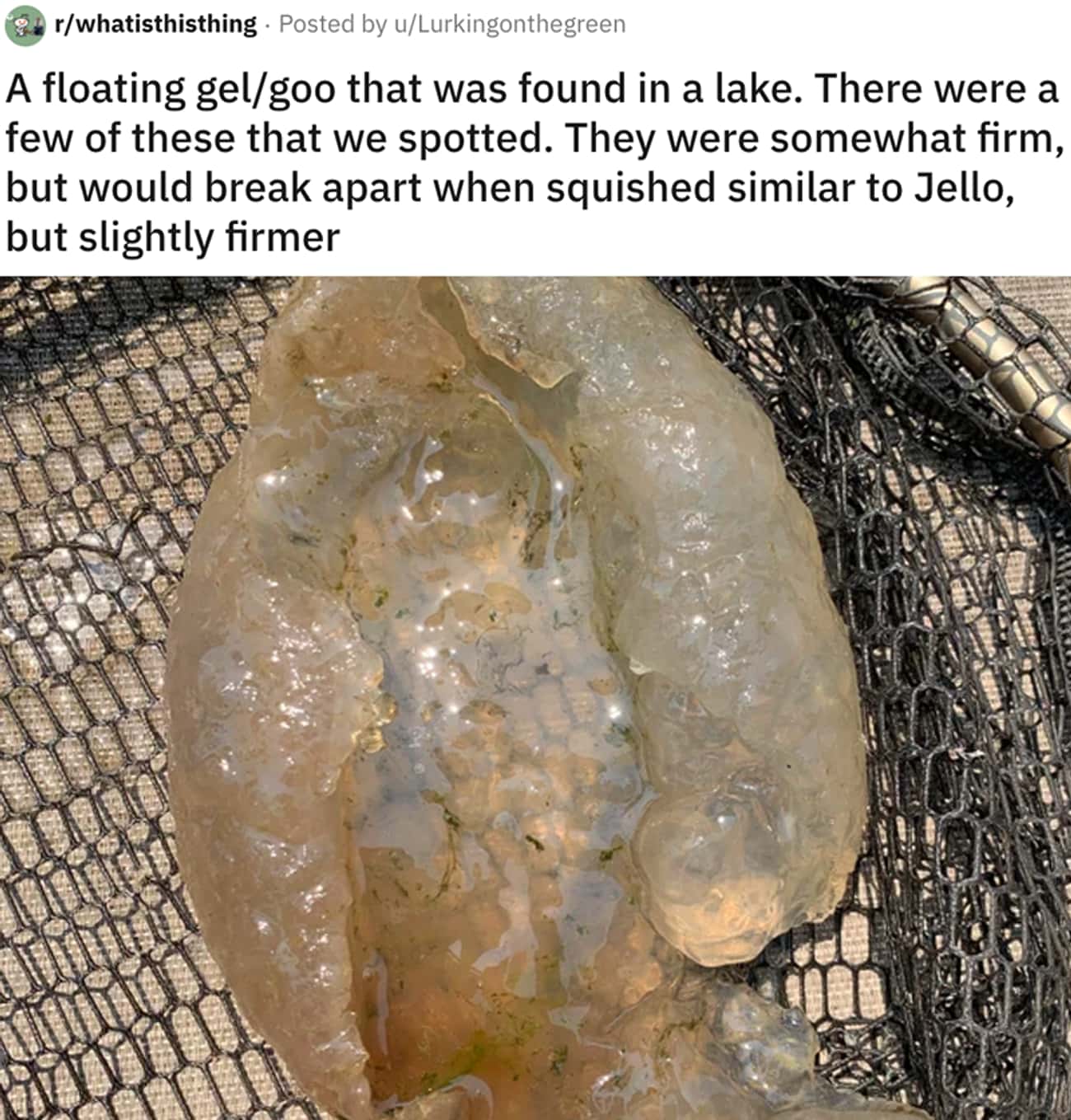 Pectinatella magnifica. Freshwater bryozoans are tiny colonial animals that can form jelly-like masses, which are often found attached to sticks or docks. Bryozoan colonies can be as much as a foot (30 cm) in diameter.