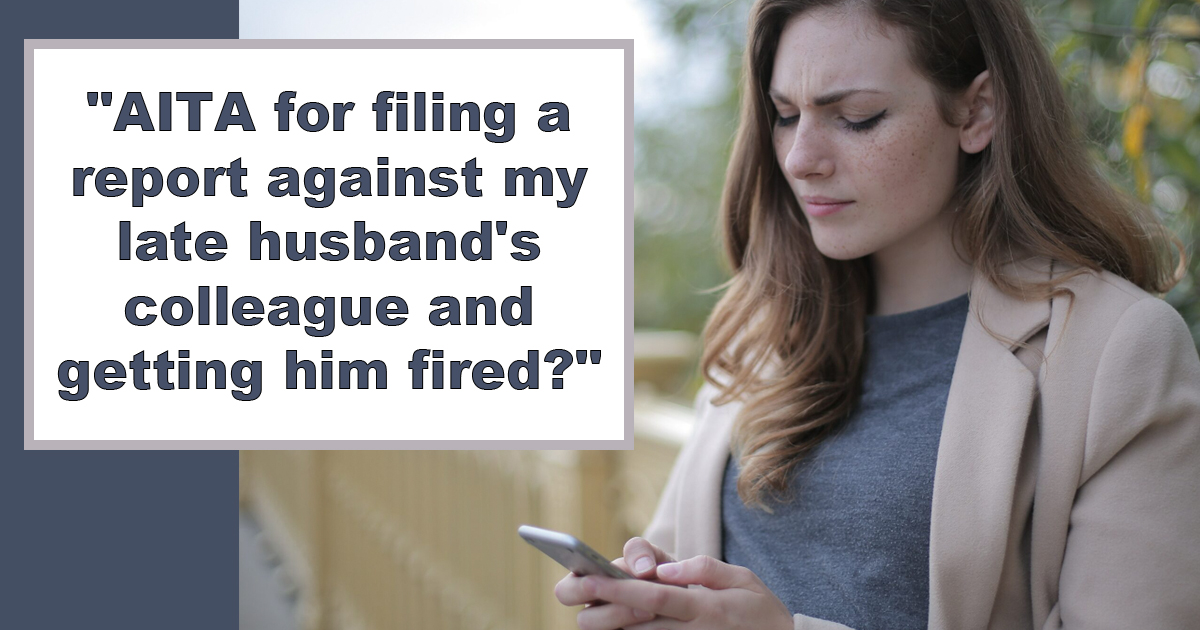 Sending a woman sexual texts unprovoked and after she tells you to stop will already earn you some “a-hole” points, but sending unsolicited sexual text and pictures of your genitals to your dead co-worker’s wife is an entire new level of wrong. When a woman sends you signs that she’s not interested, it’s best to stop while you can, other wise she may come in to your place of work and get you fired.

A woman on Reddit recently asked the “Am I The A-hole?” subreddit if she had taken things too far by going to her deceased husband’s place of work to complain about one of their employees. You can read the story in full as well as some of the top comments below.

Her husband’s coworker started harassing her with text: “I warned him to stop but he sent me a D pic one night at 3 AM…”

OP asks: “AITA for filing a report against my late husband’s colleague and getting him fired?”

My husband (33) passed away 3 weeks ago. He used to work for this company for 4 years. He’d known lots of people and made so many friends.

For days I kept getting texts from his colleague “Ted”. I don’t know him personally, I had no idea how he even got my number. When he first texted me I texted “where did you get my number?” and he replied saying he got it from my husband. At first I felt annoyed, but then I started getting flirty texts from him. They started getting more and more inappropriate. I warned him to stop but he sent me a D pic one night at 3 AM and asked if I “needed company” since he “knew I was lonely”. I was appalled and enraged, I couldn’t even sleep at night. I waited til the early morning to go to the company, straight to his boss and filed a report against him after explaining in detail his behavior. He ended up getting fired because the other colleagues said he did me and my husband wrong and disrespected his memory.

At this point, our Original Poster (OP) had every right to go and do what she did. If she didn’t know this man outside of him being her husband’s colleague, and he continued to harass her after she asked him to stop, then he had disciplinary action coming for him. What else was OP supposed to do? She had already warned him to stop and he refused.

He started arguing about how low what I did was coming to his work in hopes of ruining his livelihood. He kept saying it was between him and I and his work place had nothing to do with it, but I told him I’ve known him only as my husband’s colleague. He and a friend of his said that I was aiming to get him fired and that he “did nothing” wrong and I could’ve talked it out with him instead.

My mom called him a POS for doing this to my husband and me but also said that he had a point in that I shouldn’t come after his livelihood since the guy has a kid to provide for. I felt bed about the whole thing and now I feel like I made things worse and acted out of emotions.

There were probably other ways to handle this situation, potentially ways where the offender could have kept his job. In my world however, what he did was wrong and was bound to have consequences. Chances are, OP’s harasser most likely won’t push things too far with another woman after such a strong response was elicited. However, it sometimes takes a legal threat or jail sentence to make some people finally stop. With how quickly he got fired, it’s likely that this possibly wasn’t his first offense to the company. One commentator made the point of “What husband gives his wife’s number out to another male co-worker?” (Mirvb). It’s possible that the co-worker even obtained OP’s number by exploiting company documents.

Do you think OP did the right thing? What would you have done?

Here’s some top comments from Redditor’s, who seemed to think OP was NOT the a-hole: