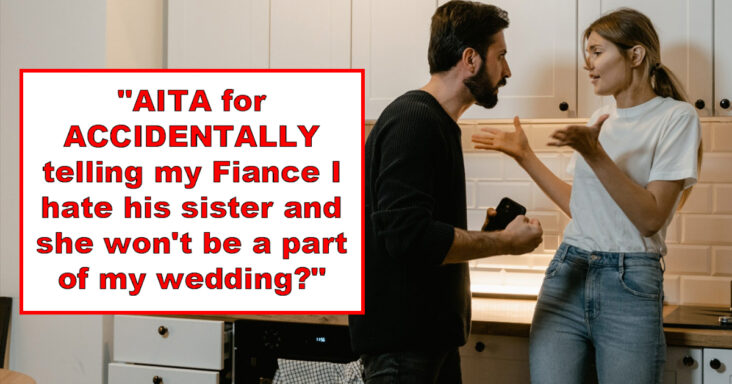 The protective bond between a brother and sister who have shared trauma is a force to be reckoned with. The love they share often cannot be compared to any other type of love. Whether or not this means it is a stronger bond than what the brother or sister will ever find again, or if it is simply just different, depends on the situation. Philosophers in ancient Greece made the concept more concrete by breaking it down into various categories. According to their findings, “Philia” love accounts for the type of love that you feel for parents, siblings, family members, and close friends. This type of love is linked with loyalty, companionship, and trust.

To attempt to break this bond between siblings is foolish and will often lead to an ending you weren’t hoping for. Recently, Reddit u/No_Possession1846 came forward to the “Am I The A-hole?” community to determine if she had been wrong to tell her fiance that his sister was unwelcome to their wedding. After sharing a difficult life together, and basically raising his sister, her fiance was understandably offended.

Below, you can read the story in context and decide for yourself if the OP had any right to say what she did, or if she’s actually just a jealous bridezilla-to-be whose insecurity forbids her husband from showing love to any other woman.

She expressed her dismay for her future sister-in-law saying: “I told him that I have always disliked his sister and wished he would just not include her for once on a day that isn’t even about her.”

OP asks: “AITA for ACCIDENTALLY telling my Fiance I hate his sister and she won’t be a part of my wedding?”

This situation is literally RIDICULOUS but this whole thing has caused almost nuclear warfare across the family so I’m here to get a consensus. Throwaway for privacy even though there’s a good chance my fiance will see it.

I (26 F) have been with my fiance Chris (26 M) for four years now. He and his sister (21 F) Lilac are VERY close. They had a pretty traumatic childhood and always promised each other to be there no matter what. Lilac is a good sister to him but as a person, truthfully, I can’t stand her. She is literally the textbook definition of a bubbly blonde. She is overly charismatic, always giggling, and in general, just acts too immature for my taste. She likes to pull pranks every once in a while on my fiance and he gets her back but the whole ordeal just seems childish and obnoxious to me. Ever since we got engaged, I knew I didn’t want her in my wedding party because that means I’d have to spend time with her at my bachelorette and other parties.

Fast forward to last night and my fiance asks me when I plan on asking Lilac to be a bridesmaid. I got quiet and truthfully said I didn’t plan on doing so. This upset him because he said wants his sister to be a part of the most important day of his life and that if I didn’t do it he was going to make her a “groomswoman” to make sure she is included. I can’t lie, this set me off. I went off about how I want to feel respected by him and be able to enjoy my wedding day. He said he also wants to enjoy his day, which to be fair, I understand. This is where I may be TA, I told him that I have always disliked his sister and wished he would just not include her for once on a day that isn’t even about her. He got quiet and went into our guest room to be alone. A couple of minutes later I got a text from Lilac that she completely respects my decision to not want her in the wedding party but she’s hurt to know what I actually feel about her. I didn’t want her to find out at all and now he’s told his whole family about our argument. Half of them are attacking me and half of them are saying it’s my day so I should be able to enjoy it. Honestly, this whole ordeal is stressful for no reason because Lilac isn’t even upset I don’t want her in my wedding party yet the whole family is upset and my fiance has been very short with me all day. AITA?

Edit: Just because I hate her personality doesn’t mean I’m mean to her. Being around her drains my social battery but I have never been mean to her nor did I want her to find out ever, especially in this way. I am just super introverted and our personalities collide. I don’t want her at my bachelorette party because I want to enjoy it fully and not feel anxious the whole time because the personification of a human firecracker is attending.

OP updated her post to let viewers know that her fiance’s sister had now been promoted from “Groomswoman” to “Bestwoman.”

Update: I am probably going to make this my only update for a while if not ever. We talked this morning, sorry for not posting it earlier, my wifi company has been having some issues. We still are not resolved. He doesn’t just want her as a groomswoman but wants to ask her to be the “bestwoman” (best man but as a woman). This is still not resolved because I am not comfortable with that and it’s more stressful because the whole family has turned into flying monkeys because his sister is the apple of their eye so they took what I said as a serious attack against her.

With a second update, OP shared how she is obviously really, really jealous of Lilac:

Second Update: He called me about two hours ago (he is currently staying at Lilacs) and asked if we could talk, I obliged and it was a very difficult talk, to say the least. I asked him to come home and he rejected. Firstly, he apologized for telling his family and said it was a rash mistake he made in the heat of the moment. Then he said that if I wasn’t willing to have her as a bridesmaid that it is unfair of me to ask him to not have her as his bestwoman and that he is not willing to compromise his sister’s role in our wedding. This made me cry and tell him that I am tired of feeling second place next to another woman and that I was going to be his wife so I wanted to feel like he had my back when I needed him. This really upset him and he said that as Lilacs big brother he is also supposed to have her back when she needs him and she needs him now when the supposed love of his life is blindsiding him with hurtful information about her. He told me that it was true, he does put Lilac first in some situations and he won’t stop because he raised her. He said it’s not fair of me to ask to always be number one. She is like his daughter. He said that he is willing to go to couples counseling, but first I need to apologize to Lilac for what I said and stop griping over the fact he wants her as his bestwoman. The call was filled with lots of tears and we finally decided to give it a rest and talk tomorrow so that we could both process what was going on.

Reddit’s verdict was that our OP was in fact, the “A-hole.” Do you agree with their judgment or would you have done the same as her?