Optimism and enthusiasm don’t come easily to everyone. And that’s even more true now, in the middle of a worldwide pandemic, where loneliness and perpetual boredom threaten to overtake everyone on a daily basis. But some people are still finding ways to discover joy in whatever small ways that they can, and if your instinct is to stomp all over that, it just might be time to ask yourself…am I the asshole?

Of course, that’s exactly what r/AmITheAssh*le is here for, and some Donnie Downer posed the question to the community earlier this week after being annoyed that his girlfriend got excited about ducks.

“My girlfriend (29) is a very lively and energetic person,” the post reads. “But sometimes her behavior is really annoying me (33). She wants me to share her joy for little meaningless things up to 5 times a day. It’s tiring.”

What’s tiring is this post. Already. Really dude? You can’t be chill with your gf being excited about life?

It doesn’t get any better. 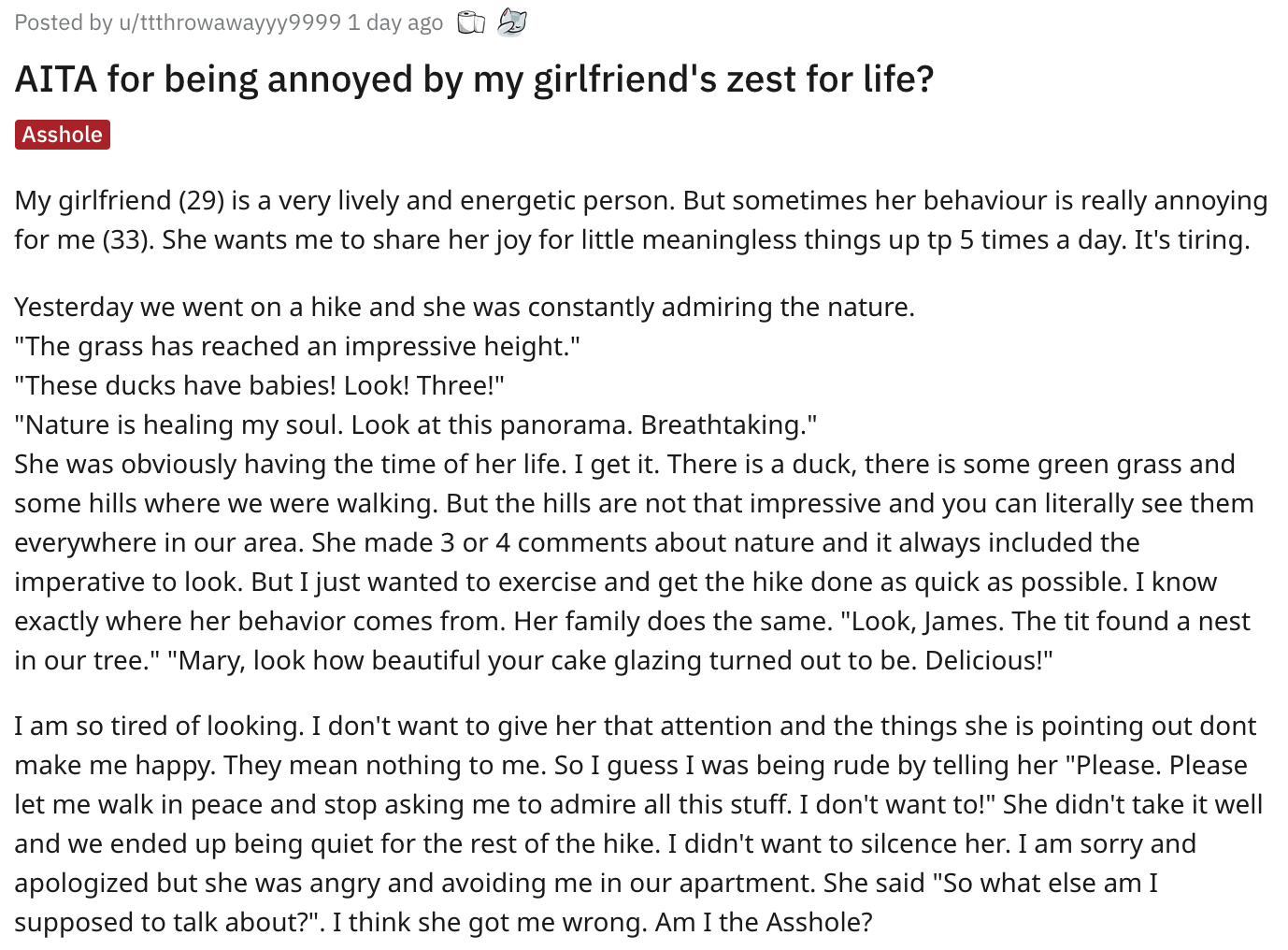 The original poster goes on to complain about a hike he and his girlfriend went on the other day, during which she constantly expressed her appreciation for nature, pointing out tall grass, baby ducks, and a gorgeous view.

“I just wanted to exercise and get the hike done as quick as possible,” he complained. “I don’t want to give her that attention and the things she is pointing out don’t make me happy. They mean nothing to me.”

Obviously, he opted to speak up and tell her to quiet down, and it didn’t go over too well. Now he doesn’t understand why on earth his girlfriend is avoiding him. Gosh, can’t think of any good reasons.

Not only was Reddit unimpressed with this douche, but the whole thing was so annoying that it even migrated over to Twitter for even more people to rip him apart.

bro what the fuck is wrong with men https://t.co/eAjylrRrnQ

Imagine trying to drain the life out of a person instead of seeking therapy about why you hate seeing people happy so much. now she’s going to feel insecure sharing anything at all https://t.co/Qx2XmSVXql

I could live on a duck farm and raise ducks for a living and every single time I saw baby ducks I would still be like BABY DUUUUUUCKS!!!!

The audacity of this post is hitting even harder right now.

So many people are quarantined by themselves and either unable to spend time with the person they’re dating, or unable to even pretend there’s a chance they’re going to meet someone any day now. But yeah, this guy has it tough because his girlfriend is happy and wants to share that joy with him. Poor dude.

Can you imagine you’re just trying to enjoy nature w your partner and he’s just annoyed at how positive you are ?? I would drop him like a hot plate https://t.co/2OQsSxGhSV

I love the term sunshine girlfriend, one day I want to be that happy

This is prob the first person to tolerate him, which in his book is true love.

And yes, the OP did make things even worse in the comments.

In his original post, he places some of the blame on his girlfriend’s family, because they are apparently also enthusiastic about life and “exactly where her behavior comes from.”

But when somebody called him an asshole, he followed up by claiming it’s a problem with “mostly women,” and insisting he prefers to talk about “more important things like finances, politics or gaming and not about some ducks.”

Imagine seeing some baby ducks and thinking “I would prefer to talk about finances and gaming.” pic.twitter.com/Z5yTI23sSM

Sorry bro, the verdict is in. You’re definitely the assh*le. Please, set your girlfriend free.

LOL I AM GONE YES MATE YOU ARE THE ASSHOLE https://t.co/5qCrB9ErUQ