On the subreddit r/AmITheA—hole, people present stories about moments when they were jerks or think they might have been in the wrong and ask for people to weigh in. You can usually tell if they are wrong or not, even if you understand both sides of the issue. And then there’s this story, where the poster is so completely and obviously the biggest a**hole on the planet it’s hard to even imagine what their daily life must be like.

The title of her story is, “AITA for telling my sister to stop blaming her weight gain on her pregnancy?” which is already terrible, but only begins to touch on the surface of everything wrong with this situation.

Basically, this woman says she and her sister have been fighting and it has naturally caused a rift in the family. She says it started because her sister saw pictures of the OP with her sister’s husband: her brother-in-law. The pictures of them were at a work event for the husband’s job.

“He works with a shallow crowd, and he didn’t want to explain his wife’s weight gain to them,” writes the OP. This is already so demented, I don’t know how to go on—you’re impersonating your sister? And told her it’s because she’s too fat and her husband is ashamed of her? Absolutely bonkers.

Yet it goes on. The OP says she explained that her brother-in-law was a “little uncomfortable with her weight gain” and “he was afraid to hurt her feelings.” She says this isn’t the first time she’s discussed her sister’s weight gain with her, as though that’s a reason to steal her identity.

Then she tried to make the excuse that she was pregnant and that was the reason behind her weight gain. I pointed out that she was barely pregnant and would probably have better luck if she lost a few. This started a whole firestorm of her complaining about me trying to steal her husband, blaming her for her miscarriage, etc.

None of that is what I meant to do, and I’ve always been here ready to help her if she wants to lose weight. AITA in this situation?

Edit: She gained weight way before she had a miscarriage. Nobody is reading what I said.

No, people are reading what you said. Even if your sister’s weight gain and miscarriage are unrelated, this is an insane way to treat anyone, let alone your sister.

AITA for telling my sister to stop blaming her weight gain on her pregnancy? from r/AmItheAsshole

The comments were excoriating: 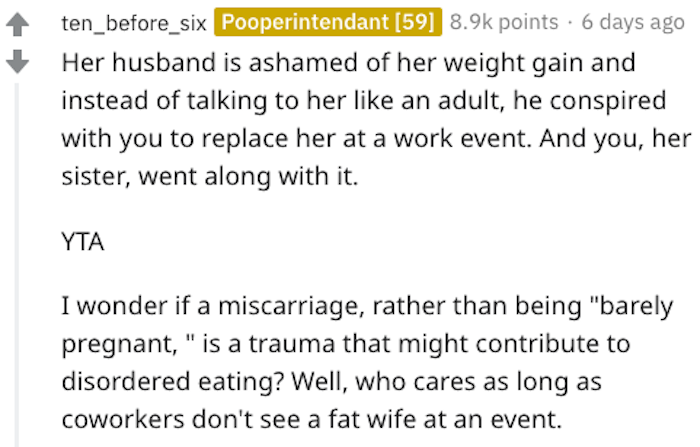 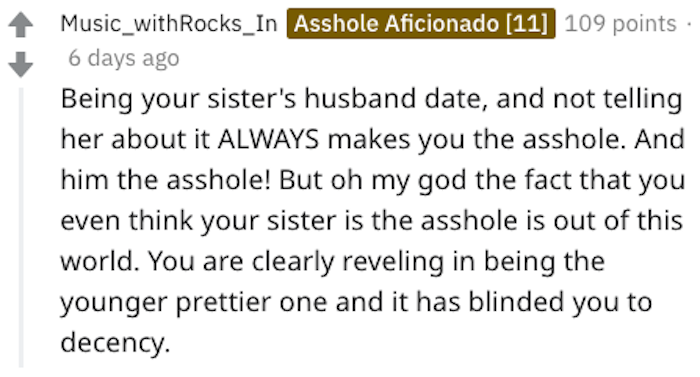 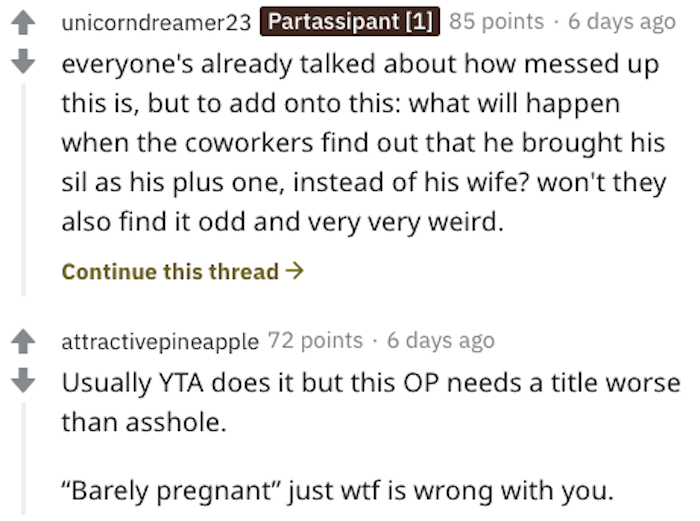 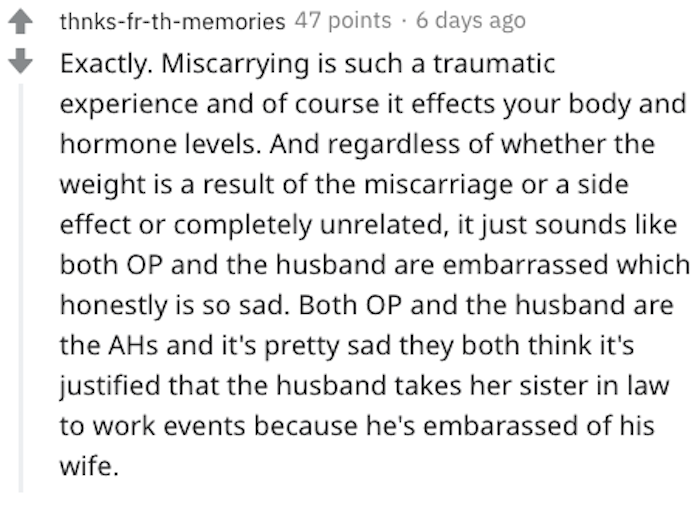 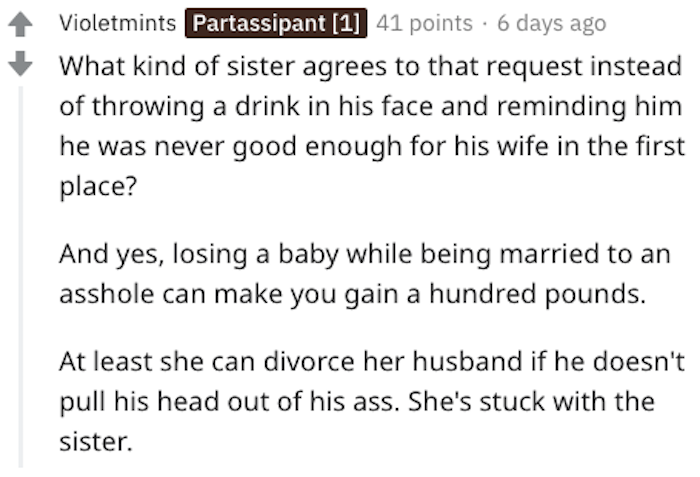 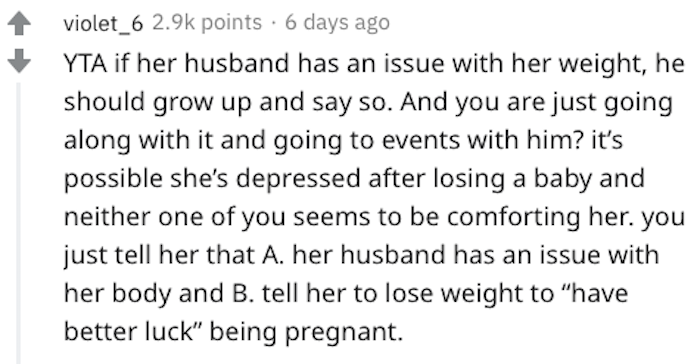 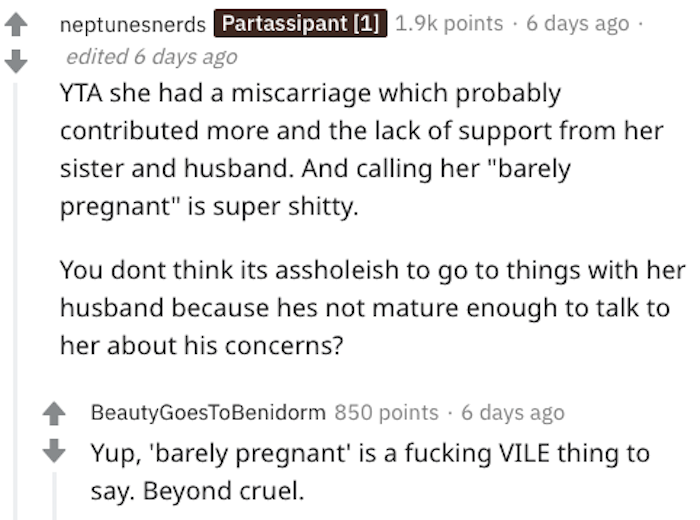 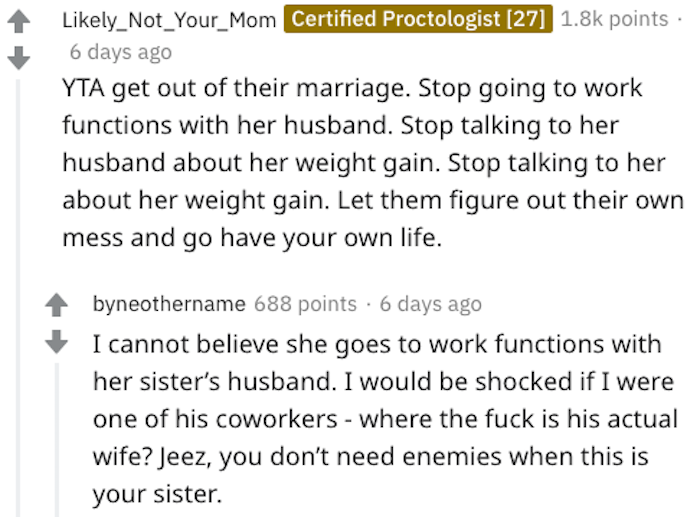 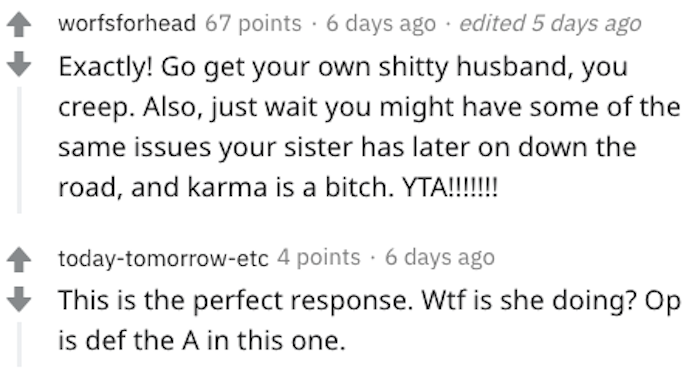 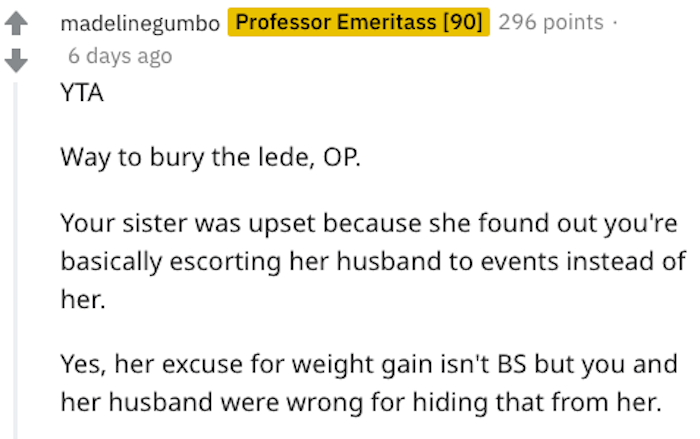 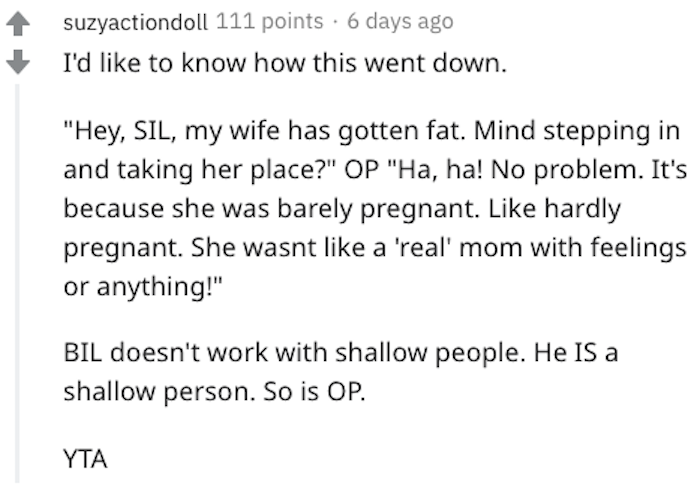 Something tells me this lady is too far gone to learn anything from Reddit. I only hope her sister leaves and finds herself a better family as soon as quarantine is lifted.