One man’s resume has gone viral after being shared on social media, but not for the reasons you would normally think.
Twitter user @kristiitat, or Kristi, was asked out by a man named James. But rather than give him a yes or no answer, she said she joked with him that if he really wanted to get her attention, she would need to see a cover letter applying for the gig.

James stepped up, creating and sending her an entire resume, which she promptly shared to Twitter.

told a guy if he rly wanted to take me out on a date then he should send me a cover letter (jokingly ofc) but he actually sent me a resume??? pic.twitter.com/qjNnVImiyx

He lists his objective as taking Kristi on a date, duh, but also clarifies that he just wants to have fun.
“Not looking to loop you into a relationship,” he writes. “I’ve known you for 4 years and always had a thing for you. Last semester of college.”

If it wasn’t already clear that James is probably looking to hook up, he titled the next section of his resume “Mating Qualifications.” 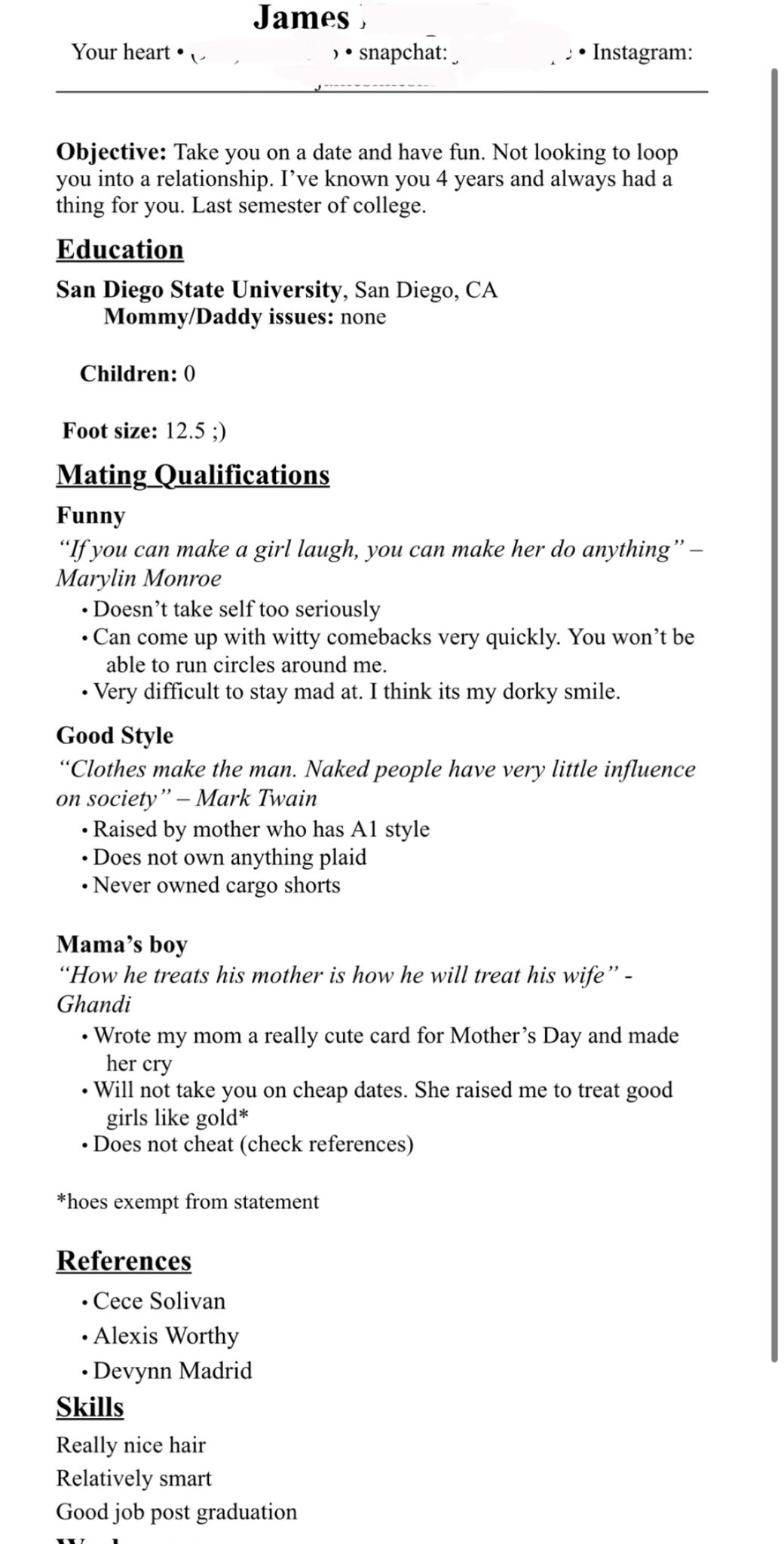 He puts forth claims that he’s quick with witty comebacks (“You won’t be able to run circles around me”) and difficult to stay mad at. He also says that he’s a mama’s boy, and will “treat good girls like gold,” with a caveat that “hoes [are] exempt from statement.”

Some people were really into James’ attempt to woo Kristi with Times New Roman and a few bullet points.

Any guy willing to actually do this… you should definitely give him the time of day!

go out with him. Adorable

this is the level of effort and wittiness i want

But others took note of the serious red flags littering what should have been a cute gesture.

Everything was so charming until I saw the misogynistic language

Lmao that asterisk means he doesn’t respect women. Idc idc dont give him your time of day.

And things got particularly interesting when the girls he listed as his references got tagged into the conversation.

“He cheated on me multiple times with reference girl two and three,” wrote Cece Solivan.

he cheated on me multiple times with reference girl two and three.

The drama continued, with James himself jumping into the fray.

Reference girl #2, Alexis Worthy, absolutely did not want to be put down as a reference, leading to a public disagreement between her and James over their dating history.

And James definitely proved the point that he’s not looking for a serious relationship with Kristi at the moment, or probably anyone else.

Sorry James, surely there are far more qualified candidates out there. We wish you the best of luck in your search…and maybe you should work on that resume.