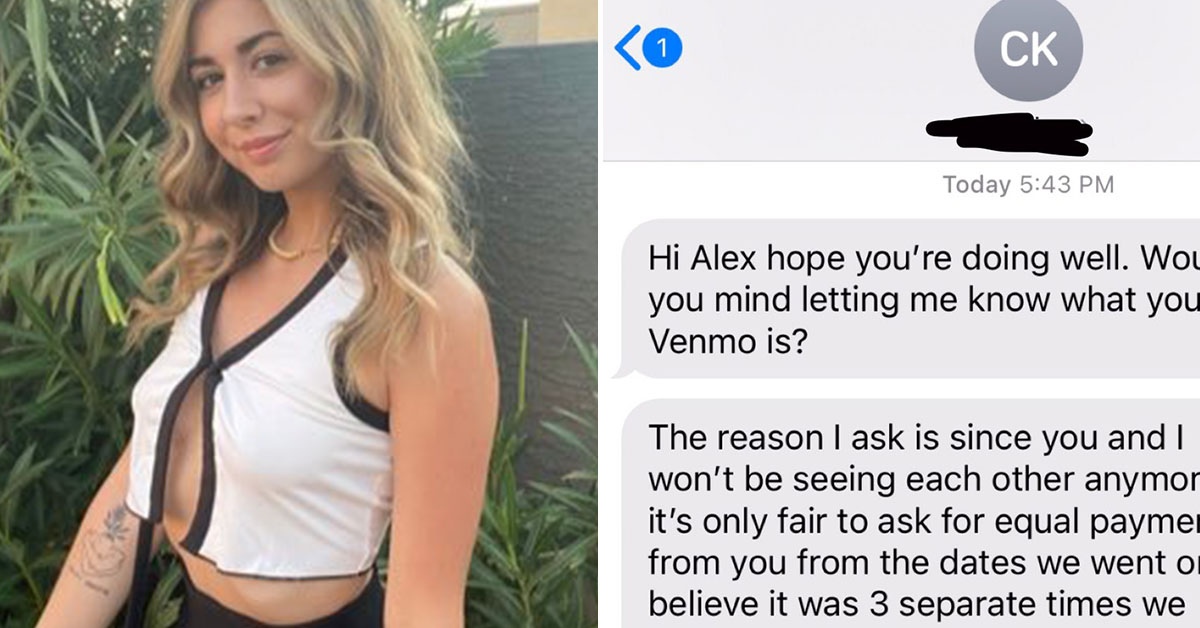 Because, first off, have you ever seen a Tinder bio? Point in case…

But sometimes the trolls who live under the dating app bridge really go the extra mile at sucking.

Now, according to a viral Twitter thread, a man thinks he is entitled to money from past dates because he is no longer interested in seeing the woman from those dates.

In other words, a man believes he is entitled to retroactive pay because the investment he put into another human did not work out the way he wanted.

Earlier this year, Colbooth posted a screenshot she took. The image contained two text messages from someone on her phone with the initials “CK.”

The first message was a request for her Venmo handle. He follows it up with another text, explaining the reason for the request. After three dates, it was clear the two weren’t going to work out romantically, so he wanted reimbursement for the money he spent on Colbooth. A whole-ass $35.

Our immediate thoughts were “seems a little nitpicky,” however, there were a lot of men who were in full support of this guy getting his $35 back — the perfect amount of money to invest in penny stocks while listening to Joe Rogan’s podcast.

This person, for example, had to be reminded that dates are not a business transaction.

Another user shared how they thought it was fair for him to ask for money back on the dates.

And another had this very…. creative analogy for the situation.

Meanwhile, others don’t see $35 as something big enough to get this petty over.

We were also reminded that splitting the bill exists, and it’s OK to request to split the bill during the first few dates.

Truly. If you don’t have a lot of money and are on a date with an empathetic person, they will understand!

Read also: Dude’s Ridiculous “Requirements For Women” In His Tinder Bio Get The Internet Roast Treatment