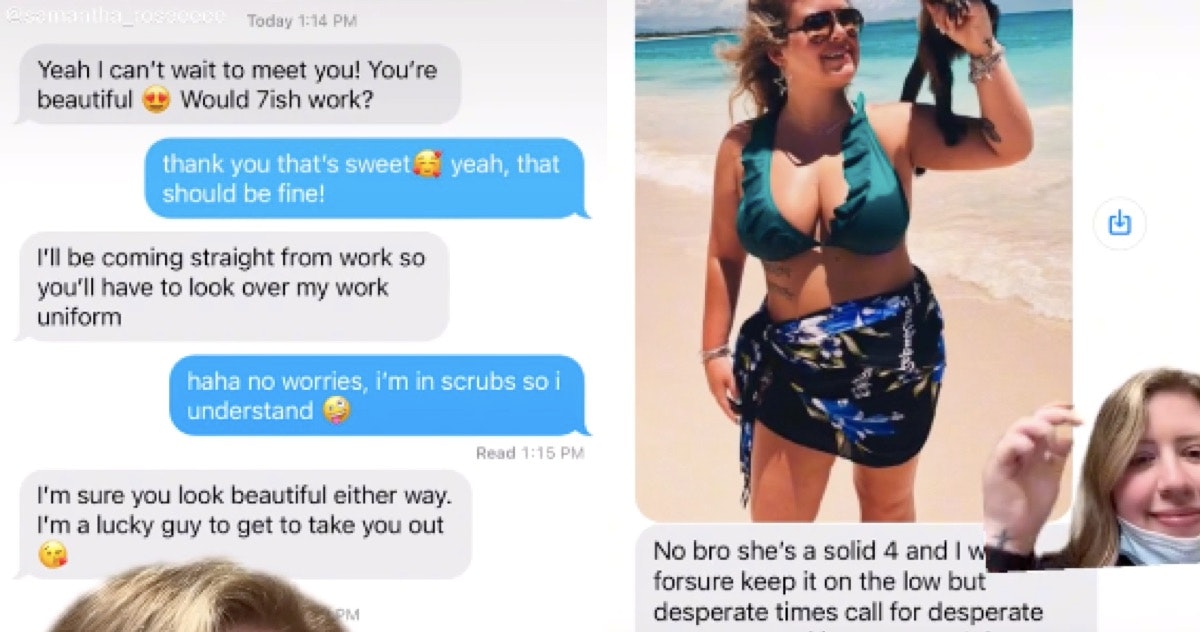 TikToker Samantha Rose got horribly insulted by her Bumble match, but at least it made good viral content. On Thursday, she posted a text thread between herself and a man named Jake.

The first half of the convo is pretty sweet—he tells her he’s a “lucky guy” to be going on a date with her, and they’re making plans to meet up. Then things take quite a turn.

Seemingly making a mistake, he then sent her a photo of herself in a bathing suit, along with a text that says, “No bro she’s a solid 4 and I will for sure keep it on the low but desperate times call for desperate measures and beggers [sic] can’t be choosers all I saw was tits and an easy lay.”

Clearly, Jake wants her to think he meant that text for someone else.

His next message reads, “Damn I’m sorry I didn’t mean to send that to you… I was talking about someone else and clicked your picture on accident.”

Samantha didn’t answer him, but she did share the convo on TikTok with the caption “I hate it here.” Me too, honey, me too.

Eventually, Jake saw he’d gotten famous online and angrily wrote Samantha again, saying she fosters kids to fill a “void” inside her, which reveals a whole lot more about him than her.

In another video, Samantha agreed with a few commenters that she thought Jake’s message was actually intentional, like he wanted her to know that he thought so little of her.

The plot then thickened—Samantha Rose now thinks that Jake is a guy catfishing her, and is actually a man named Cody who she matched with on Bumble in 2021.

She also says three other women on TikTok messaged her because they received similar messages from a Bumble match. So is this guy’s kink is making women feel like sh-t about themselves?