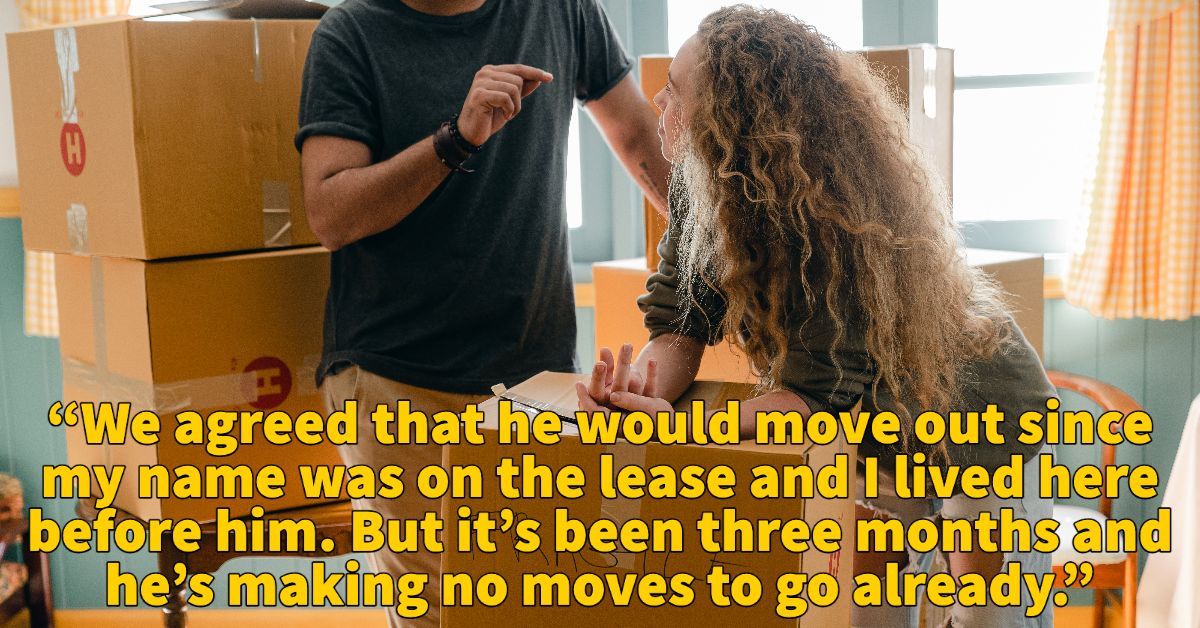 When you live with a partner and you two break up, there are a lot of extra troubles you need to go through as you both move on. Do you both leave the place? Who gets to stay? Do you both stay and just awkwardly go about your lives?

One Redditor has an ex who initially agreed he would move out — but three months have gone by and he’s made no effort to get out. So the OP started resuming her life and bringing dates over — which angered her ex and their friend group.

“Ex and I broke up about the months ago. There was no cheating etc, the relationship had just run its course. He seemed to take it well. Started going on dates, which kinda stung, but he’s not my bf anymore so none of my business,” the OP said.

“We agreed that he would move out since my name was on the lease and I lived here before him. But it’s been three months and he’s making no moves to go already. May long weekend I tried to talk to him about it and he said he would go when he was good and ready and to stop nagging him. Legally, I can’t do anything and he knows that. I can start legal proceedings, but with the courts backed up I’ll still be stuck with him for months, if not longer.”

“Anyway, I recently started seeing someone new. So I’ve been bringing him back to my place to spend the night a bunch. We’re not doing anything sexy in the shared areas, but it’s clear why he’s coming over. Ex told me he was uncomfortable with this, but I’ve kept doing it. This morning he angrily told me that he was moving out to his buddy’s place and he hoped I was happy. Honestly, I am happy, but our mutual friends say that I’m wrong to drive him out of a place he’s legally entitled to stay. AITA?”

“NTA. He should have moved out when you asked nicely. Play stupid games, win stupid prizes,” said

“Your ‘friends’ need to be clear that they’re a*sholes in this too. They’re effectively saying, ‘Don’t live your best life, just put your happiness on hold for this inconsiderate guy who isn’t even a friend any more that you’re trapped with. Stop being visibly and audibly happy. He has a right to enforce silence in YOUR place. His “comfort” matters more than your needs. Place him above yourself, and if you’re not, you’re selfish.’ It matters to have friends who share the same values that you do. He’s deciding to move out, finally, on account of his own issues. You didn’t make him, anything. He could’ve crashed at his friend’s place ages ago. Lots of them were probably offered, and he was more comfortable imposing. ETA on you. Change the locks and lose the ‘friends’ that are shaming you for moving on from that sad person. They were willing to sacrifice your happiness before, this whole time, and their reactions now tell you who they are,” suggested

“NTA…Honestly, why would he want to stay there, if not to just drive you crazy? Hopefully you both move on down a better path,” said

“NTA. You two broke up. He agreed to move out, then dragged his feet. Did he expect you to put your social life on hold until he felt good and ready to move? Or do you think maybe he was trying a ploy to get you to move out first? At any rate, maybe he was legally entitled to stay, but he was being a dick. You have nothing to feel bad about,” said

“NTA. This is a to-be-expected hazard of living with an ex. It doesn’t exactly sound like he’s been going out of his way to make life easy for you so I don’t know why you’re obligated to tiptoe around his feelings,” said