If you’ve ever planned a wedding, I think you’ll agree that the following meme pretty much sums it up:

Let’s face it, weddings are insanely expensive (average cost $33,900 in 2020) and a lot of people freak out when they discover the cost of throwing themselves a giant party where they’re the stars.

It’s not unreasonable to want to cut corners wherever you can.

But this story from a Redditor named u/josh8449 is still pretty shocking. He writes:

(Sorry, on mobile and throwaway as she’s a Redditor)

We are getting married in July of this year. The venue is booked and the wedding is pretty much sorted.

Emma has been researching dresses and has a little scrapbook of lots of dresses she likes for ideas, but is now looking to buy.

All that’s left to get is the bridesmaid dresses and her wedding dress.

We jointly put aside 10k each for the wedding, everything is paid and we have 6k left over which I think could go towards the honeymoon on top of the honeymoon fund we already had.

Posting in subreddit r/AmItheA**hole, Josh says he and his fiancée are getting married in July and everything is pretty much set. But his fiancée wants to buy a wedding dress that he thinks is shockingly expensive: $950.

That’s a lot of money…but not for a wedding dress. If you think it is, look around. People can spend tens of thousands on dresses, which is totally ridiculous in my opinion, but their money to spend if they have it. That’s what’s especially odd about what Josh writes, since he says the wedding is paid for and they have another $6,000 “left over” which he wants to add to their already standing honeymoon fund. He still can’t understand why his bride wants a new dress:

I’m using my dad’s old tux he used for his wedding to my mom, just had it taken in a little, Emma can’t use her mum’s dress as her and her mum both say the style hasn’t aged well wich is fair. I had a quick google around at dresses online and there were so many! and so many just like the one emma wants for like $50 to $100.

I’m not trying to get her to cheap out on her dress but she will literally wear it once, one dress for over $1000 is just insane that would fund our honeymoon . I tried to show her some dresses i found on a reccomended app called wish and others on website’s but she was having none of it. She is very slender but apparantly wants it specially fitted? It turned nasty unfortunately because i said i refuse to drop such a large amount of money on a dress and she argued that she is using her own money for the dress. Wich isn’t strictly true as we ate about to marry and our finances will be joined.

So, someone else is willing to pay for it? What’s the problem, then? The problem is Josh wants to put his foot down about this and have his fiancée order a dress from China from a company that infamously sells awful, unwearable products. 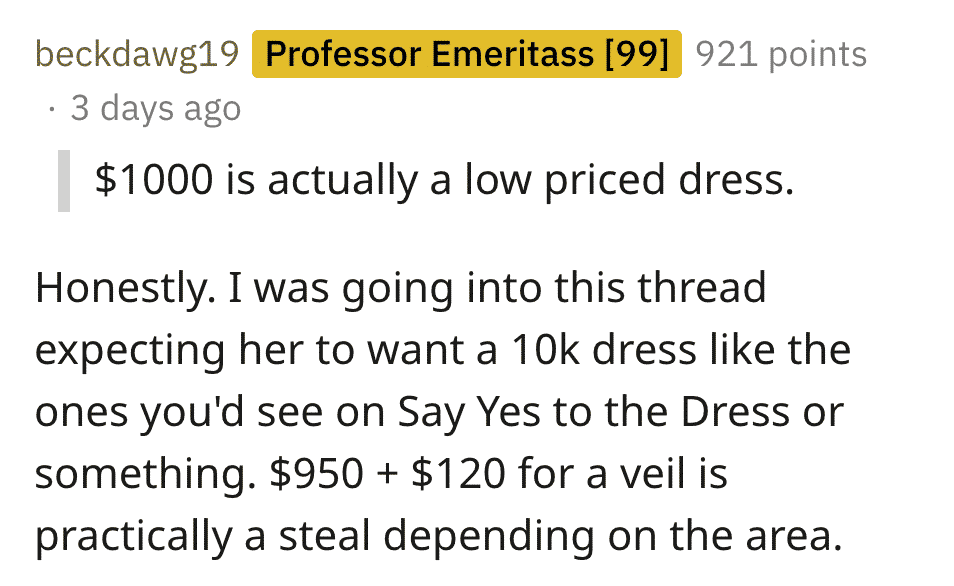 He says things really blew up after that and wants to know if he is the a**hole, because his fiancée is thinking about calling off the wedding:

AITA here? is there something i am seriously missing because after we argued about the dress emma has been Extremely cold towards me. Then yestersay she said if i want her to cheap out on her wedding dress on her wedding day that she needs to really consider if we are a good match for marriage. Im blown away that she would say that over a dress, i told her she’s like a toddler throwing a tantrum over a sparkly toy she can’t have, that was a mistake as she left to stay with her parent’s, who called to tell me i am much more than an asshole. AITA here? TL;DR fiancee can get similar dress for around $100 with shipping online but wants to blow over $1000 at a local wedding dress boutique aita for saying to get a cheaper one online?

The most damning part of the whole story might be this edit, which says that Emma found the thread—probably because he used his real name:

EDIT: Emma found this thread, it was a mistake to post here and im sorry i posted our problems on reddit, iata

The OP has finally realized that he is being a big jerk, but the comments still tore him apart. Redditor milee30 wrote:

YTA. You say you don’t want her to cheap out, but then you say you want her to buy a $50 -$100 wedding dress. That’s cheap. That’s cheap even for a regular dress. Those cheap dresses you’re finding online will look terrible in person and are the source of so many disappointed women and jokes. Wedding dresses and their tailoring are expensive. $1000 is actually a low priced dress.

Regardless of dress type, though, your reaction to her – calling her names and deciding you have veto power – is the real problem. You should be solving this issue together. If you can’t, maybe it’s not time to get married yet. 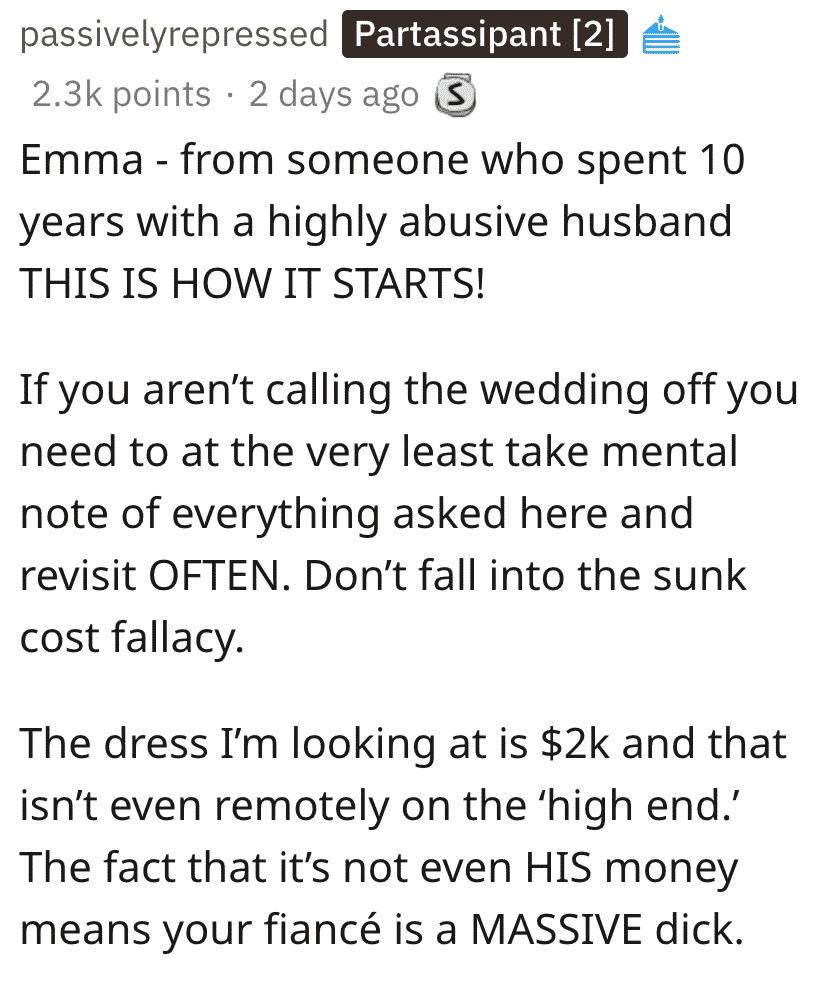 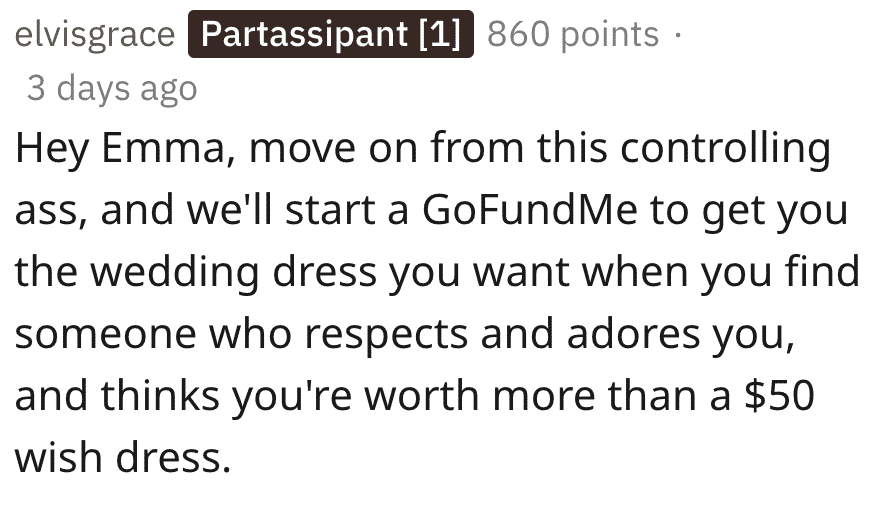 Others warned him that his idea of buying of Wish or a site like it was terrible, sharing a few horror stories, like this one from VisualCelery:

My sister ordered a dress off one of those Asian websites where you select a dress and send in your measurements so it’s custom made for you, and when she got it it looked exactly like it did on the website (which, we many of us know, isn’t always the case!), but it turned out to be cheaply made. The boning broke and ended up jabbing her in the ribcage all night, and when she got home and wanted to get it off, the zipper was broken and our mom had to cut the dress off her. OP, please don’t ask your fiancee to order a dress off a sketchy website. Maybe she can find something cute at a thrift shop or buy a white prom dress if she’s open to cheaper deals, but honestly, 1k is completely reasonable for a wedding dress. Don’t forget, she is putting her money into this, she should be able to make some spending decisions.

Another Redditor hoped Emma was reading all the comments. MaryMaryConsigliere post a message to her:

Emma: Ask yourself if your fiance’s behavior here is a one-off. There are some concerning things here:

Maybe you’re both cracking under wedding planning strain, and this is an out-of-character moment that you can work through, but maybe this is pointing to a larger pattern. Proceed with caution. Remember you’re about to enter into a pretty intense legal and social contract with this man, and that you’re signing up for a lifetime of conflict resolution with this person in particular. The way you both approach disagreement and handle conflict now reflects how you’ll be likely to continue to do so going forward. Now may be the time to double check with yourself if this is the right move.

Then she said she got a PM from the OP that was full-on blaming Reddit for ruining his relationship: 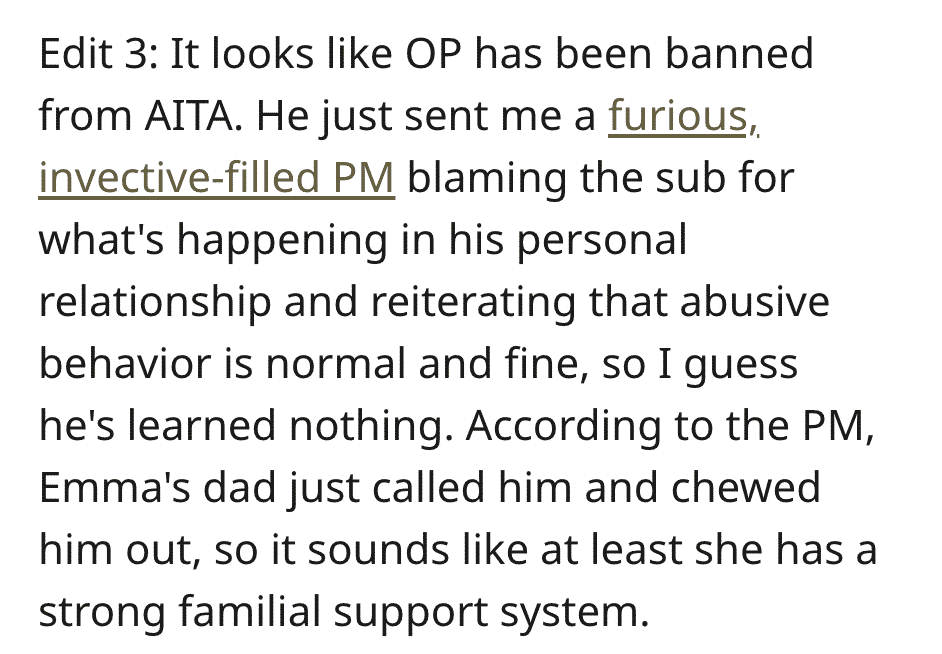 Buddy, take a look in the mirror. Only one person is causing problems for you. Emma, you can do better!