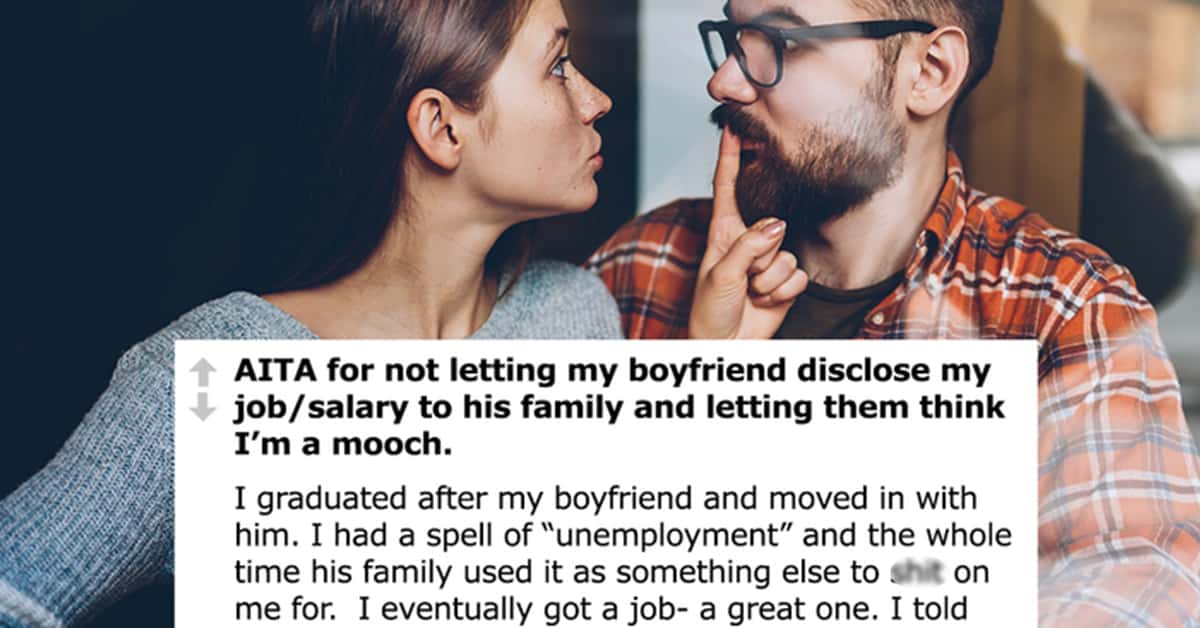 A woman posting to the subreddit r/AmIthe A**hole under the handle u/ttd00 has been on the outs with her boyfriend’s family for years—they’ve dated since college, and she claims his folks have had it out for her since the beginning because she was “thin, introverted” while her boyfriend is “handsome, life-of-the-party type.”

That doesn’t sound like a very controversial pairing to me, but his folks apparently had a problem with it, telling him he could “do better” for their entire relationship.

After graduation, she moved in with him and worked part-time from home. She says that at times she made more money than he, even though he works as an engineer, but his parents still regarded her as a mooch. Then things changed:

Well I eventually got a job—a great one. I told my boyfriend not to tell his family that I got an actual job unless they specifically ask him. I also told him not give details about my title or my salary (because I know they’re dying to know). “She works with electronics. She doesn’t want me to disclose her personal details” is basically what I told him to tell them.

My boyfriend thinks I’m a major a—hole for this, but I’m just done with his family at the moment. I spent so many years trying to please them, only to have them make me shed lots of tears. I know I can easily tell them what I do/how much I make, but it’s oddly satisfying having them think I mooch off my boyfriend, but then see what I’m doing on social media and thinking “wait how would they afford that?” (Yes my bf is an engineer, but this is in California lol. He can barely afford to live by himself.)

BUT I also can see my boyfriend’s side of things. Would like to hear other opinions! Am I an a—hole for this?

She clarified in an edit that his family does know that she had a job, they just don’t know what it is or how much she makes.

Overall, folks voted that the OP was not the a—hole, reasoning that how much someone makes is really their business, and definitely not her boyfriend’s parents. 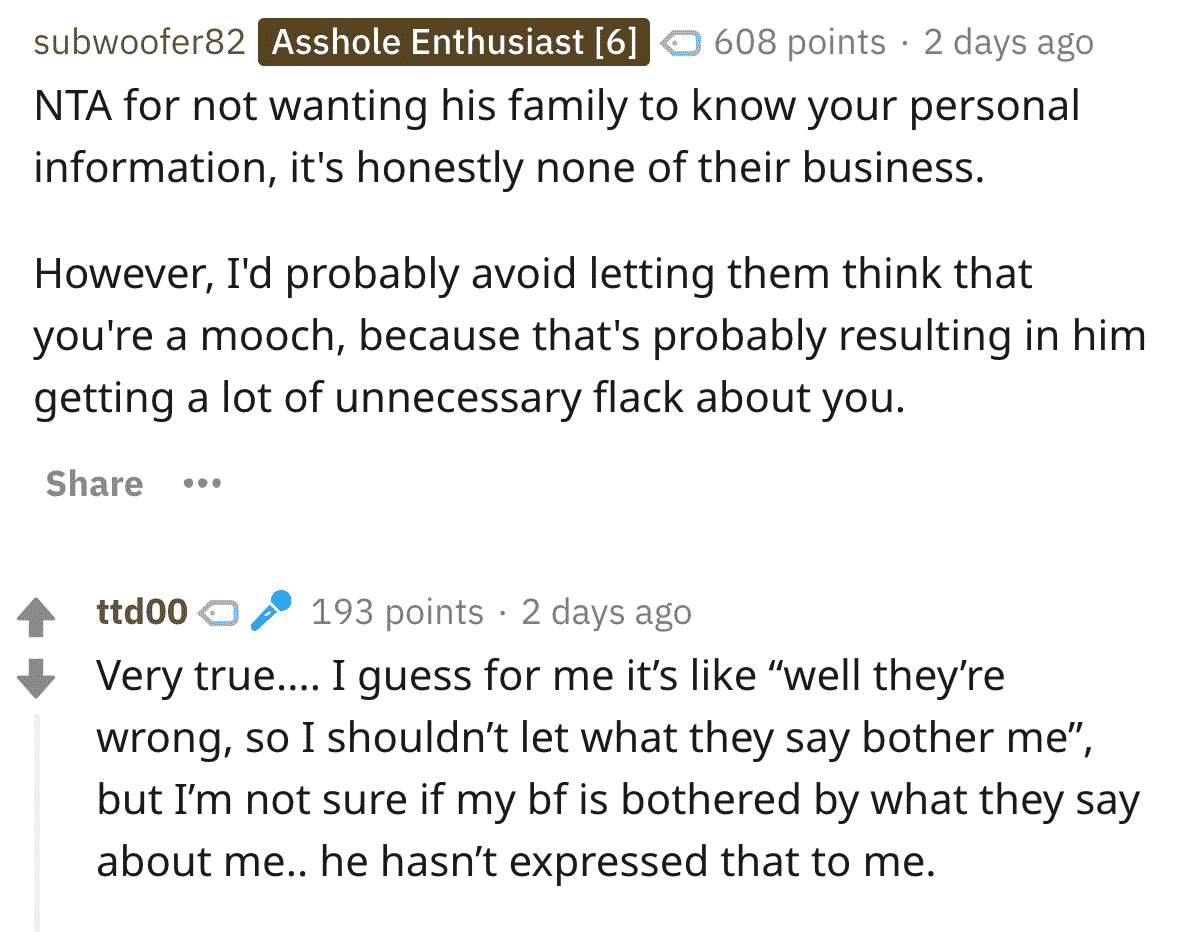 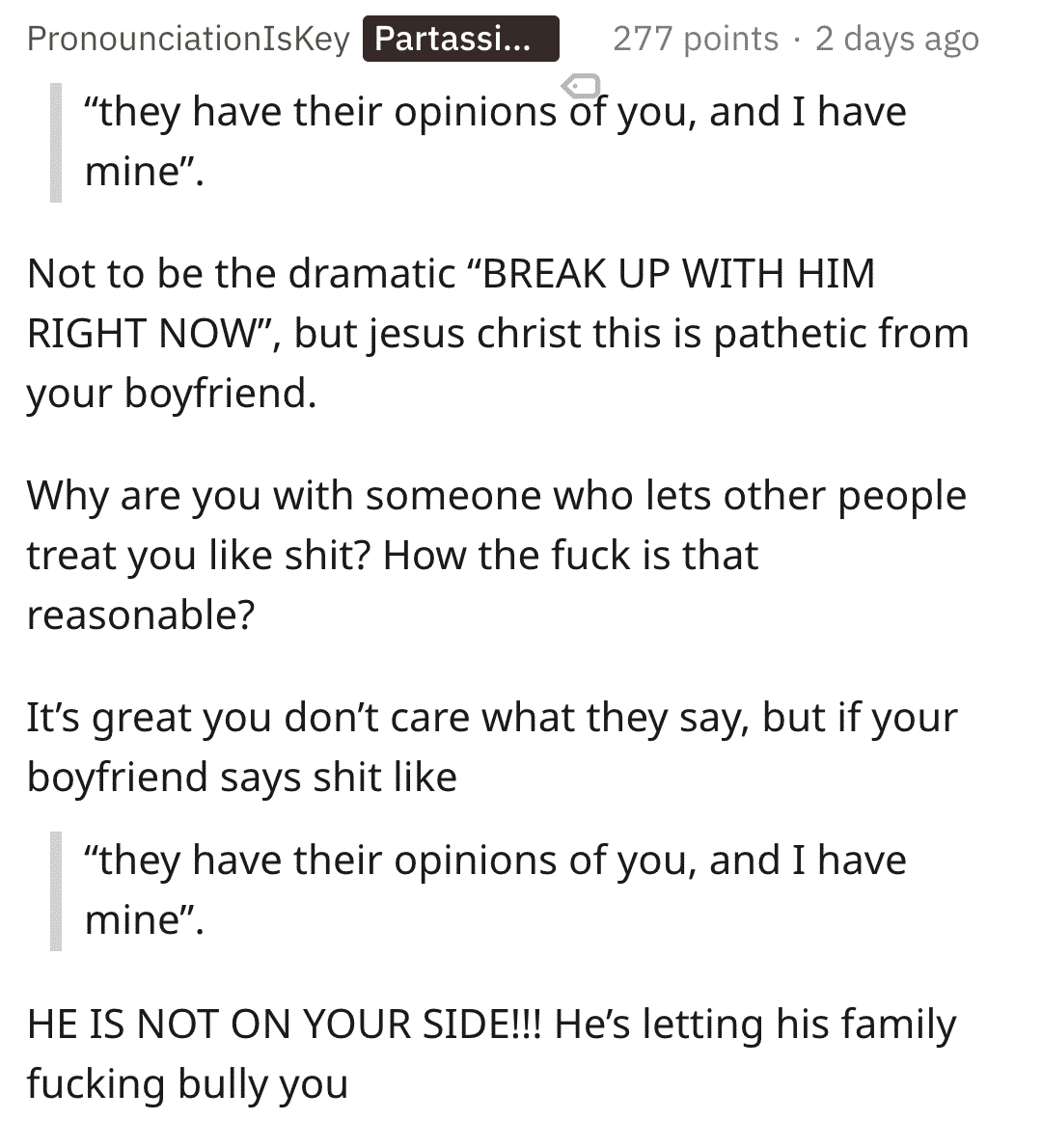 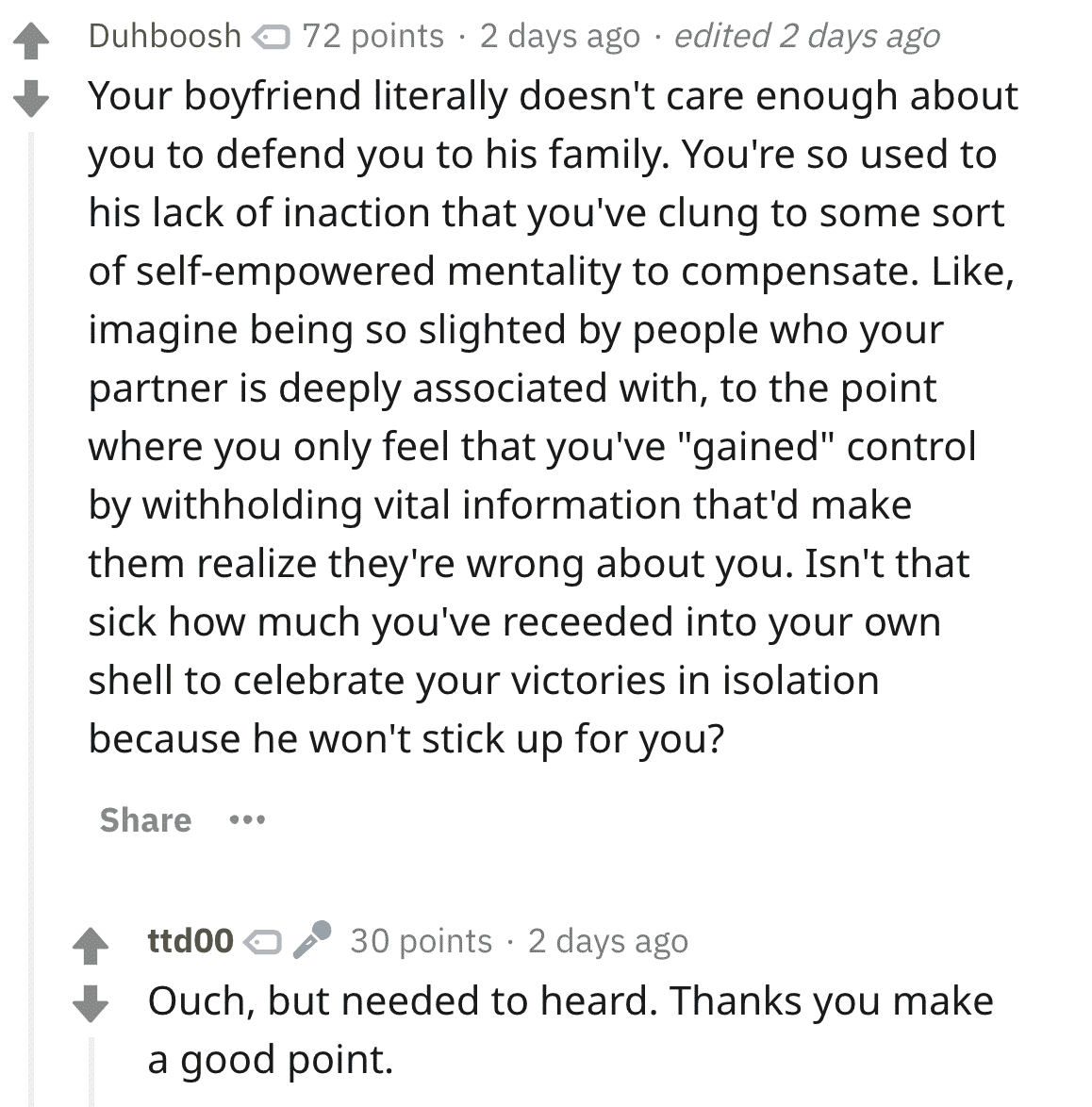 Though some thought OP was the jerk in the situation, largely because she was asking her boyfriend to play games with his own family to derive some sort of satisfaction about her own supposed self-worth.

A lot of people also pointed out that if he’s uncomfortable in this situation, he should have been sticking up for his girlfriend all these years, not letting his family talk down to and about her. On that count, the OP defended her boyfriend, kinda, writing this in a comment:

He has the mindset of “they have their opinions of you, and I have mine”. In the beginning, I was hurt that he wouldn’t defend me, but he expressed to me that he wants to avoid conflict among his family. I understood and obliged. Now I don’t give rats ass about what they say about me, so that helps. 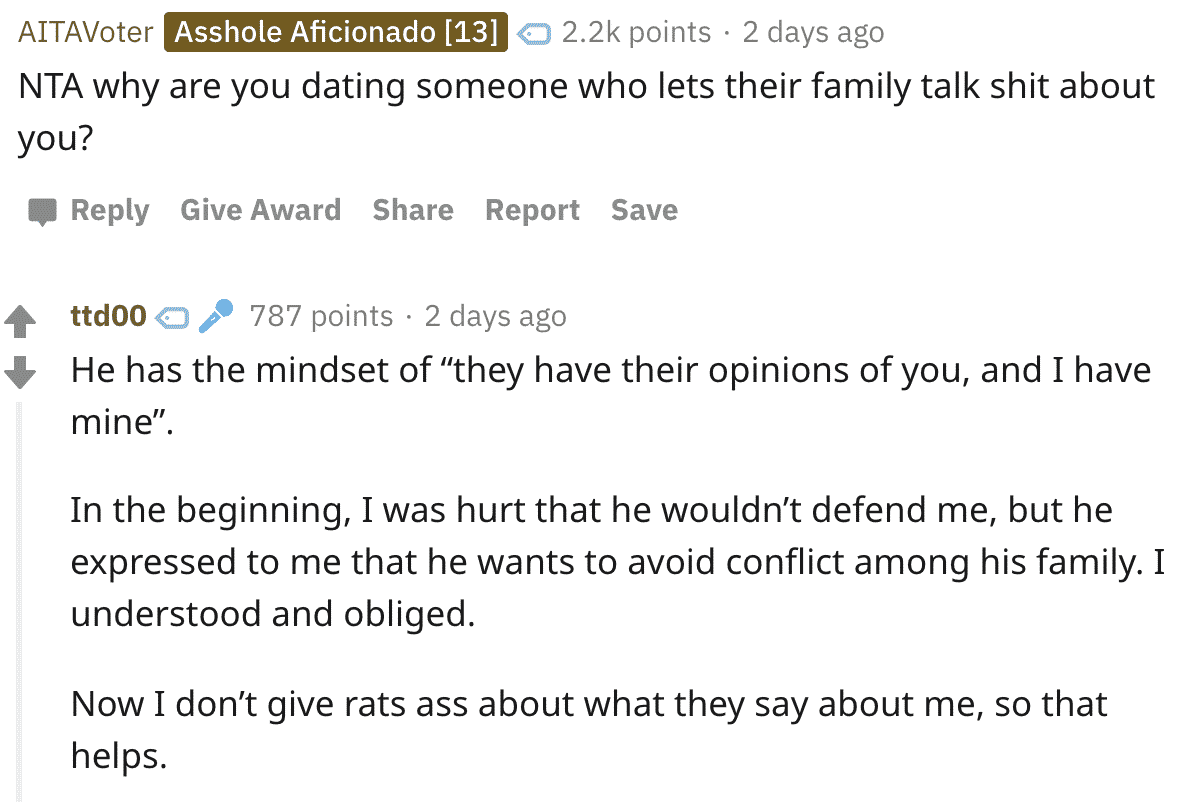 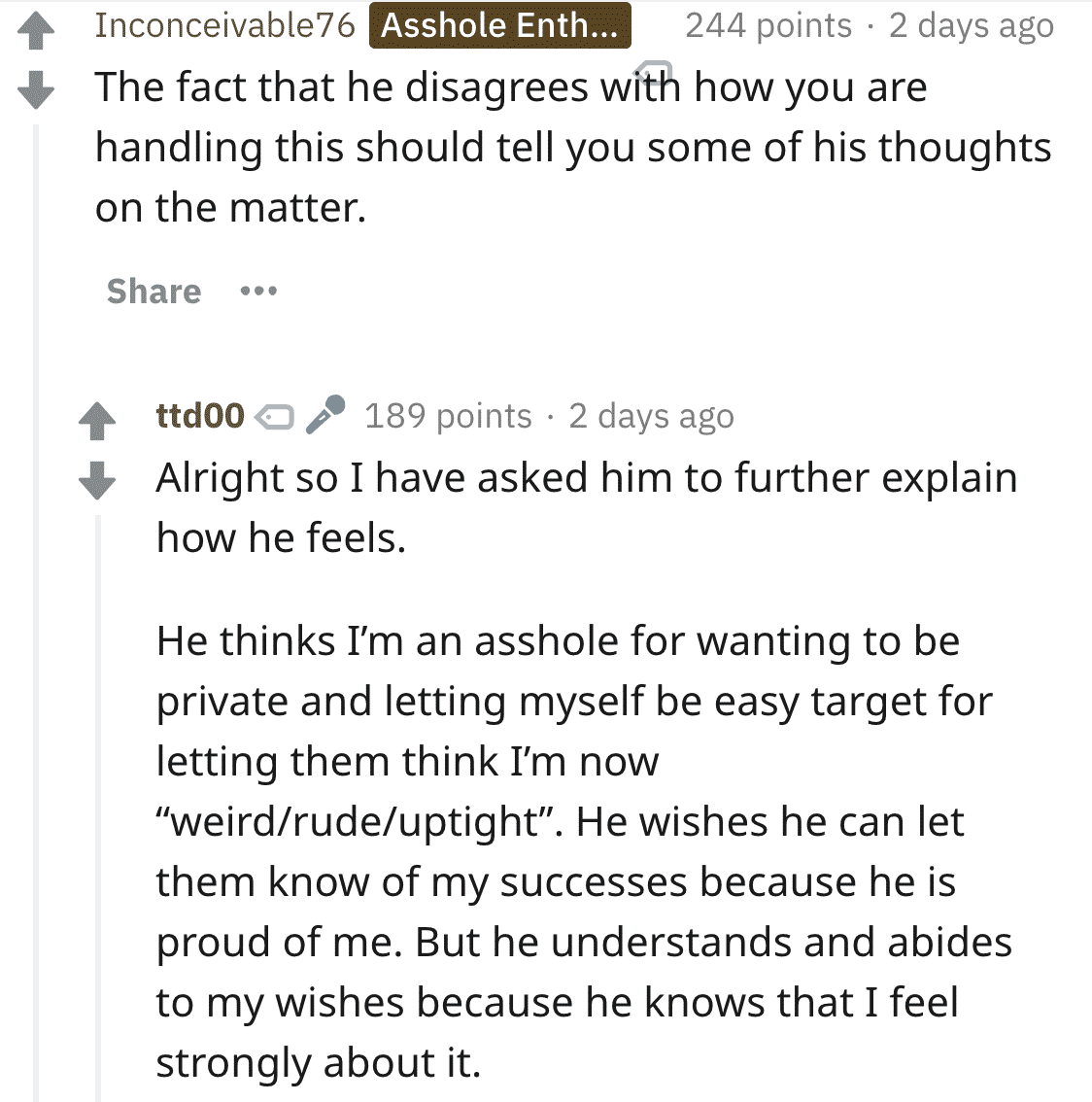 If she’s not actively mad at her boyfriend for having such compartmentalized opinions about his parent’s behavior, then maybe she should cut him some slack. As user subwoofer82 wrote:

NTA for not wanting his family to know your personal information, it’s honestly none of their business. However, I’d probably avoid letting them think that you’re a mooch, because that’s probably resulting in him getting a lot of unnecessary flack about you.

When you’re in a relationship, you have to think about how your actions are affecting the person you love. Petty revenge is not worth the pain…especially when you’re making so much money, OP! Go on a nice vacation with your boyfriend and leave the family drama behind.