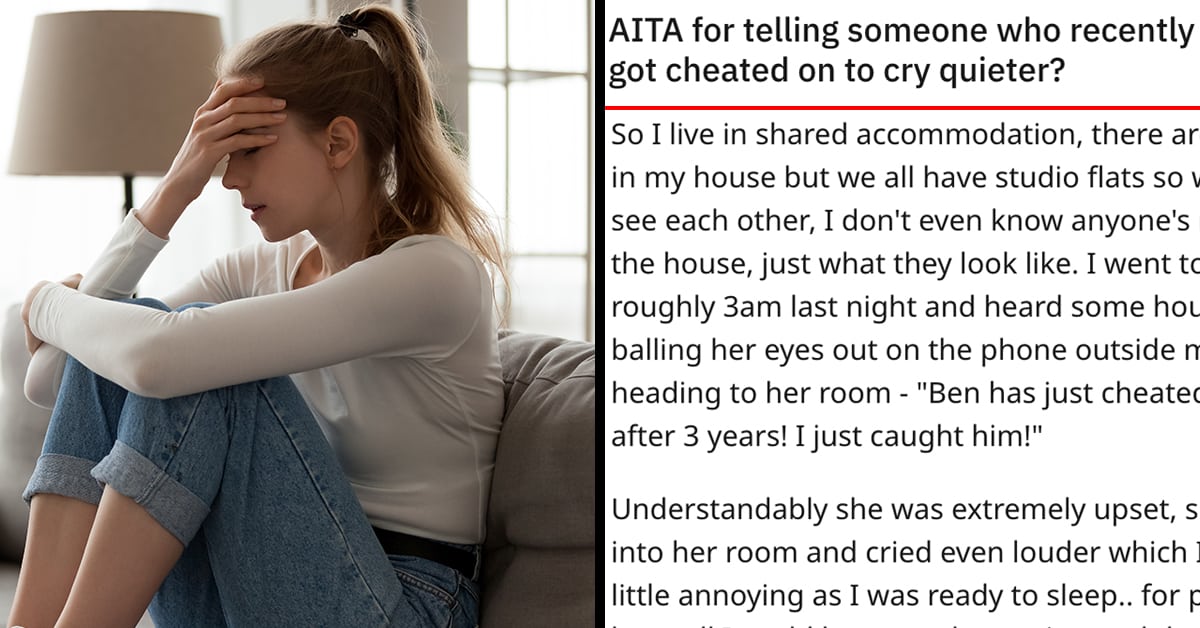 If you’ve ever shared any kind of accommodation with another human as an adult, you know how tricky it can be. On the one hand, you all have needs and you want to treat other people and what they need respectfully. On the other hand, get out of my face and away from my stuff, intruder!! At times, these two hands get into a slap fight and our better self loses big time.

Redditor u/z-2 posted on subreddit r/AmItheA**hole to ask about their behavior with a flatmate who they don’t really know. They describe their house as having eight people, but all their studios are basically private. They recognize people but don’t really know anyone’s names. The incident they wanted judgment on had happened late the night before, and they were feeling pretty bad about it:

I went to the toilet roughly 3am last night and heard some housemate bawling her eyes out on the phone outside my room, heading to her room—”Ben has just cheated on me! after 3 years! I just caught him!”

Understandably she was extremely upset, she went into her room and cried even louder which I found a little annoying as I was ready to sleep.. for probably an hour all I could hear was her crying and the odd word here and there, it was doing my f—ing head in so I had to knock the door and ask if she could be quiet, I told her Its obvious shes upset but there are other people in the house that have to hear all of this. 1.5 hours passed and it didn’t quiet down and I just had enough, went to the room “Can you please cry more quietly, I can’t sleep because all I can hear is you,” she just shut the door on me.

I know its an upsetting situation to be in but IDK, I feel like she shouldn’t be keeping random people up because of her personal situation.

Unfortunately for the OP, most people did not agree.

“Yes, YTA[You’re The A**hole],” wrote Bendanarama. “Put a pillow over your head and muffle your ears or something. Telling someone to be less emotionally distressed because its inconvenient to you is a dick move.”

Commenter Darth_Hufflepuff·agreed, writing, “Wow, YTA. This is her home space and she found out she has been cheated on. She is not throwing a party. Sometimes you just can’t control how your emotions get out of you. If you can’t sleep just get some earplugs for a couple of nights. And maybe get some empathy as well.” 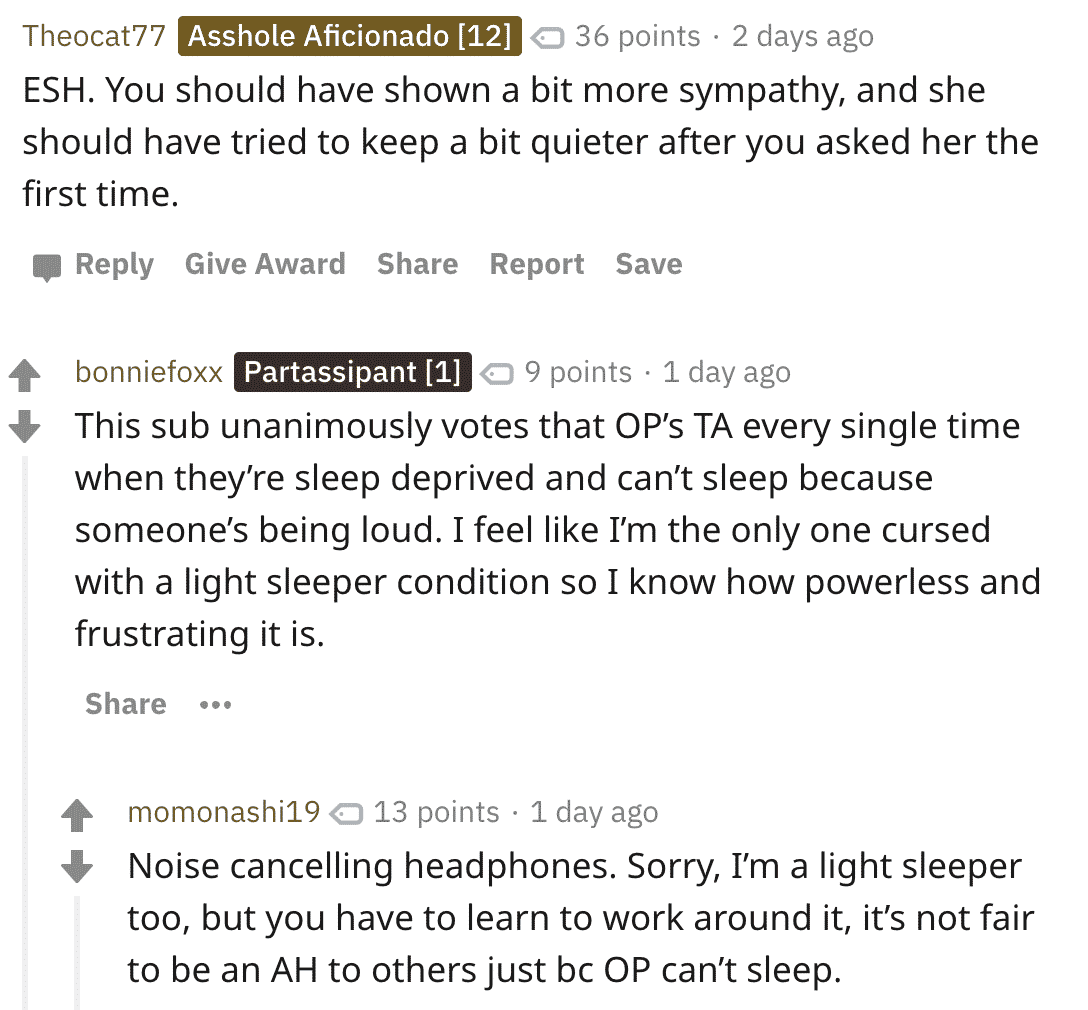 After getting all these verdicts, something kind of amazing happened: the OP admitted they were wrong. Not just to Reddit, but to the poor crying girl who was cheated on by Ben. They edited to say they apologized:

Thanks everyone, I think it was just a heat of the moment, I am the asshole here without a doubt.

I should go apologize.

Edit: Apologized, she was in good heart laughing about the whole situation with me. Guess I’ve learned my lesson. 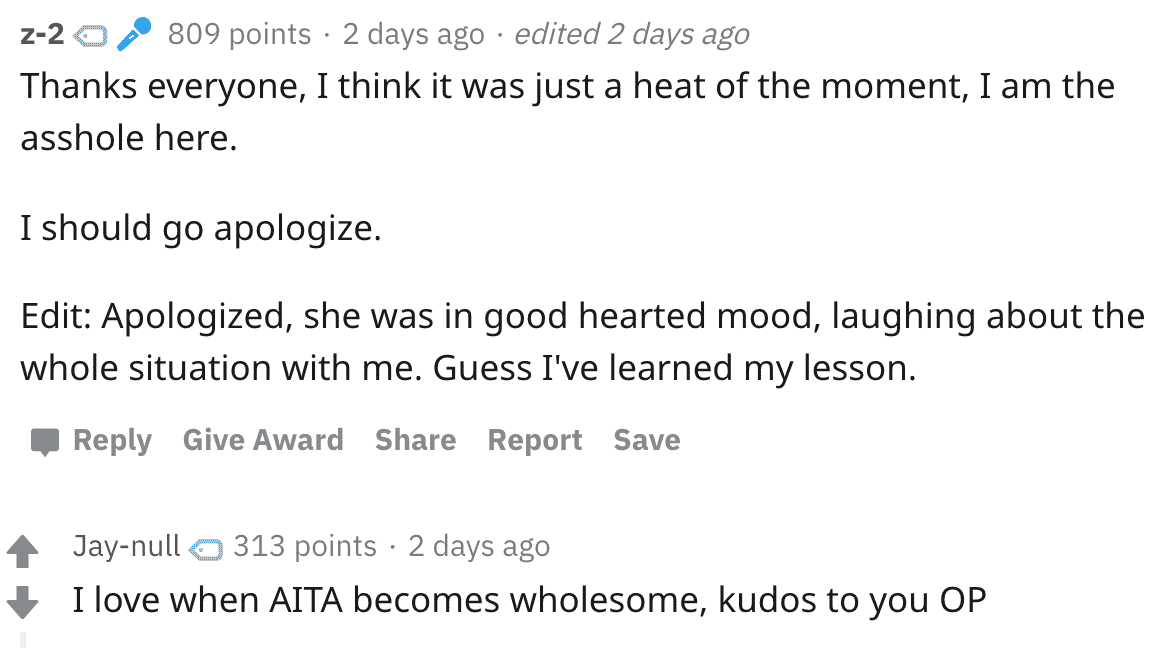 It’s hard to restrain yourself when someone is keeping you up or stealing your food or whatever, but when you’re stressed out by roommate troubles, it’s probably best to consider what’s troubling them before starting that in-house drama.