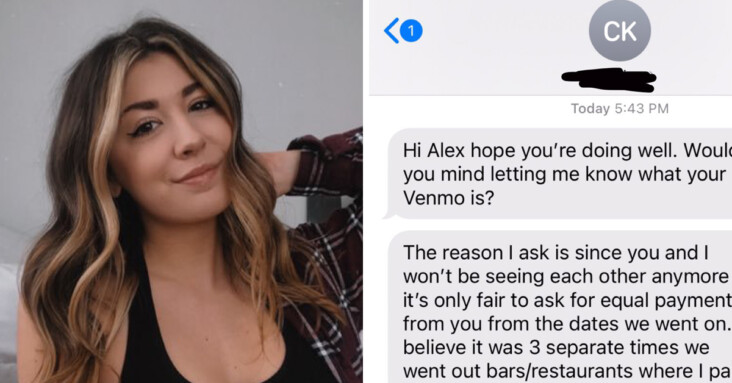 Alex Colboth of Milwaukee, Wisconsin was in for a rude surprise after she went on a Tinder date with a man known only as CK: he asked her to reimburse him for half the money he had spent on their three dates when she decided she was no longer interested.

On Twitter, Colboth shared a screenshot of CK’s message: “Hi Alex hope you’re doing well. Would you mind letting me know what your Venmo is?”

‘The reason I ask is because since you and I won’t be seeing each other anymore it’s only fair to ask for equal payment from you from the dates we went on.”

CK continued in an effort to justify his request. Because he paid, he said, she should refund him for the three different dates. He believed $35 was fair and believed she was a “fair girl.” He included his Venmo link.

She followed up by stating she would not be sending him money and that she had offered to pay for all three dates previously.

Her first post has racked up over 184,000 likes and has thousands of responses, most of which dive into the question of who pays for dates.

“Don’t say you’re going to pay for something and then say nvm after the fact,” one person argued. “He made the decision to pay for their dates tf. If he wanted to split he should’ve said that prior.”

Another agreed: “Him asking for the dates to be split evenly isn’t the issue here. It’s that he waited until AFTER he knew things wouldn’t continue to ask. So he wasn’t paying to be nice in the first place, he was paying with the expectation of some reward (sex, companionship, etc) which is weird.”

Others found the humor.

While some of the responses were sexist and belittling, others were a little more thoughtful in their critique.

One said, “I have never personally done this, but I think it’s ok. CK managed to say something uncomfortable, was honest about what he was hoping to accomplish and did it respectfully.”

Someone else wondered if perhaps the man was poor and suggested empathy.