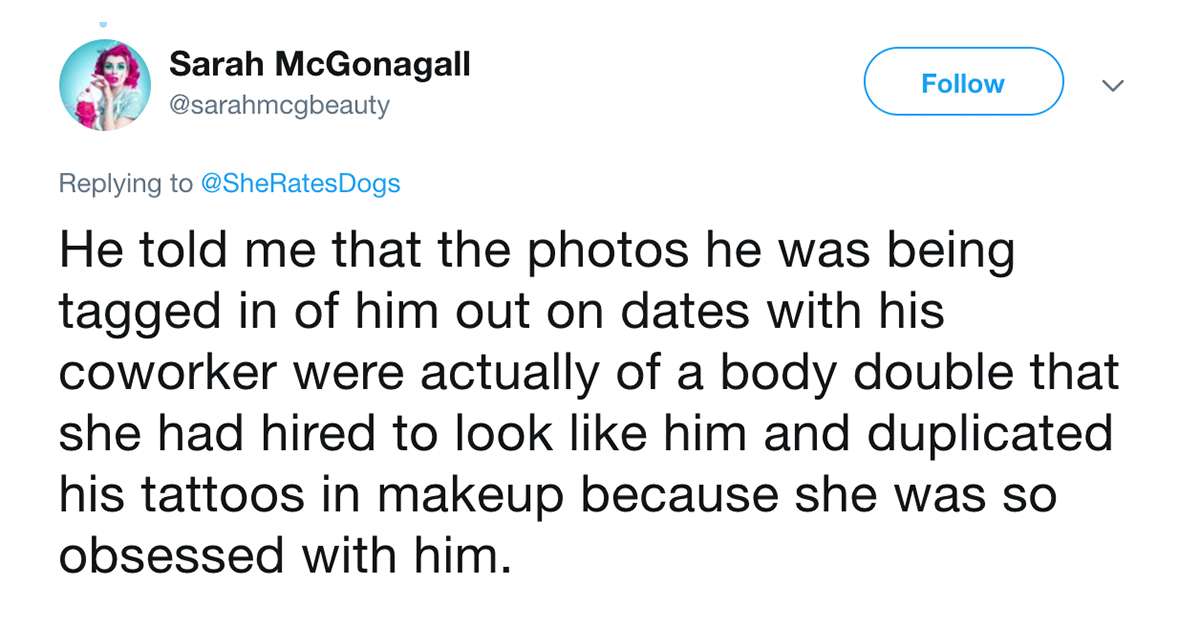 Getting screwed over by your ex can be a really rough time in anyone’s life. Breakups are hard enough as it is, but to break up because you find out the person you’re dating is a huge POS—that’s even harder. After the relationship is said and done and we find out the lies our exes have told us, it makes the breakup even worse. Recently, @SheRatesDogs shared a tweet saying she wanted women to share their “favorite/worst story of an ex lying to you” and she would retweet them and share them throughout her day.

She posted one of her “favorite lies from an ex” that is so outrageous, it makes me literally SMH.

This was my favorite story of an ex blatantly lying so… today we are doing a group activity… please respond with your favorite/worst story of an ex lying to you & I’ll be retweeting them throughout the day pic.twitter.com/mJ6pEHCP6Z

Before she knew it, women all over the world were sharing the horrific lies and fibs their exes made up throughout their relationships.

My first boyfriend SWORE he wasn’t cheating on me until I found his furry twitter and his furry online girlfriend but he claimed it didn’t count since only their furry personas were together, so them sexting didn’t count as cheating

My ex went to visit a military friend who was apparently under such strict security they had to take everyone’s phones before entering the housing building.

Called the base, they don’t take phones.

Another ex: found empty condom wrappers in his overnight bag and he said he was just practicing using them with himself incase we broke up and needed to get used to the sensation again 🥰🥰

One of my ex’s changed a girl’s name on his Snapchat to “Team Snapchat” thinking he was slick & hiding the fact he was getting nudes from her. Until one day I was like “why did you just get like 10 snaps from Team Snapchat in the last 30 min we’ve been sitting here??” Idiot lmfao

He told me that the photos he was being tagged in of him out on dates with his coworker were actually of a body double that she had hired to look like him and duplicated his tattoos in makeup because she was so obsessed with him.

my exes excuse to cheating was (and i quote) “we had math together and she would give me handjobs DURING class and i didn’t know how to say no, i promise it was nothing”

It’s safe to say that men are absolute pigs. Stay safe out there y’all—you all deserve better.