A girl may have No Name but she’s definitely got a bunch of tattoos.

Maisie Williams, the actor who portrays the fearless badass Arya Stark on Game of Thrones, has been accumulating tattoos in the 10 years since the HBO hit show started filming. She was just a kid when it began but now she’s 22 and got a pretty decent collection of ink.

Let’s take a look at each of Williams’ tattoos.

We’ll start out with the most mysterious one—mysterious in that there is no picture of it that we know of, and we looked through a LOT of Getty photos. There was another a picture of the tattoo, according to Teen Vogue, but the account that tweeted it is now gone and we couldn’t find any screenshots of it (what gives, internet? You’ve failed us).

Another Twitter user did notice it and post a very blurry picture of it in 2016. Teen Vogue had reported that it was “a pair of Japanese kanji characters in red on the back of her leg, just above her ankle.” The phrase supposedly means “adventure,” which is an apt tattoo for sure. 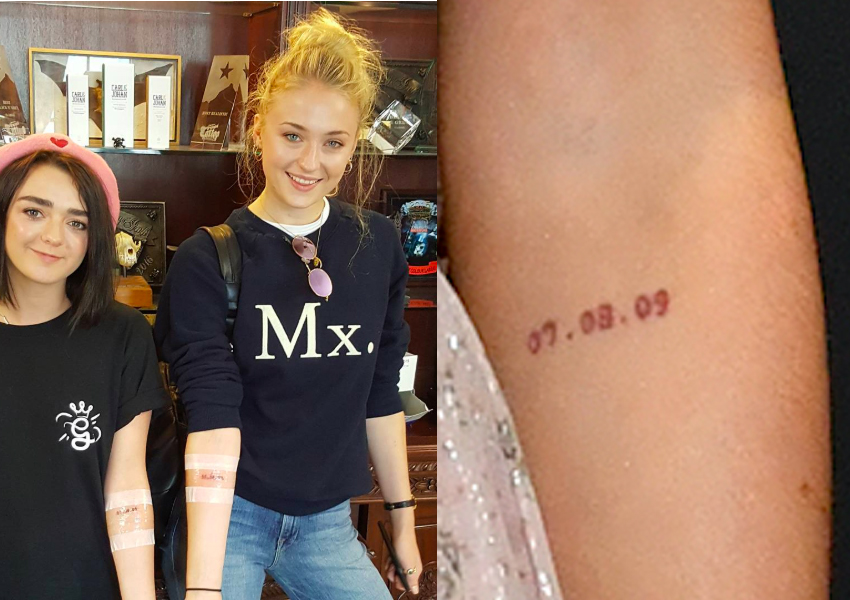 Williams got matching tattoos with her real life BFF, Sophie Turner, who plays Arya’s sister Sansa Stark. The tattoos, done by Belfast-based artist Kat Paine, read 07.08.09. Those numbers represent August 7, 2009 (because the month and day are switched across the pond), the day that both Williams and Turner found out they’d landed the roles of the two Stark girls. 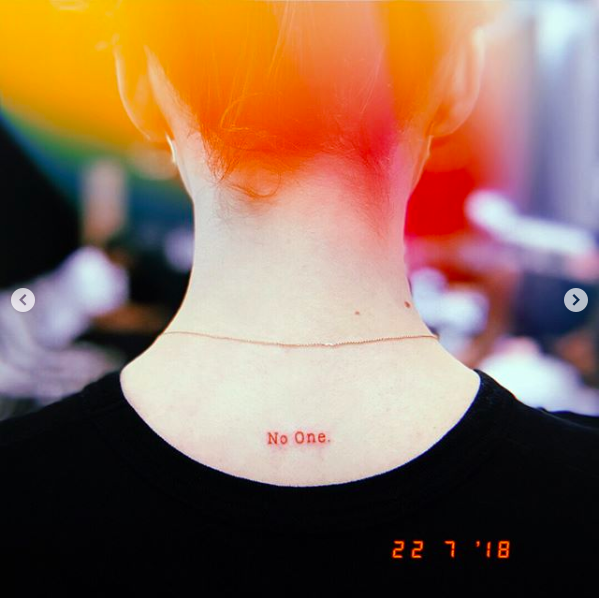 Then it seems that Williams got at least three (possibly four?) tattoos in one day, from New York artist @mr.k_tattoo.  She got the words “No One” inked in red on her back just below her neck. That refers to her time training with the Faceless Men in Braavos. 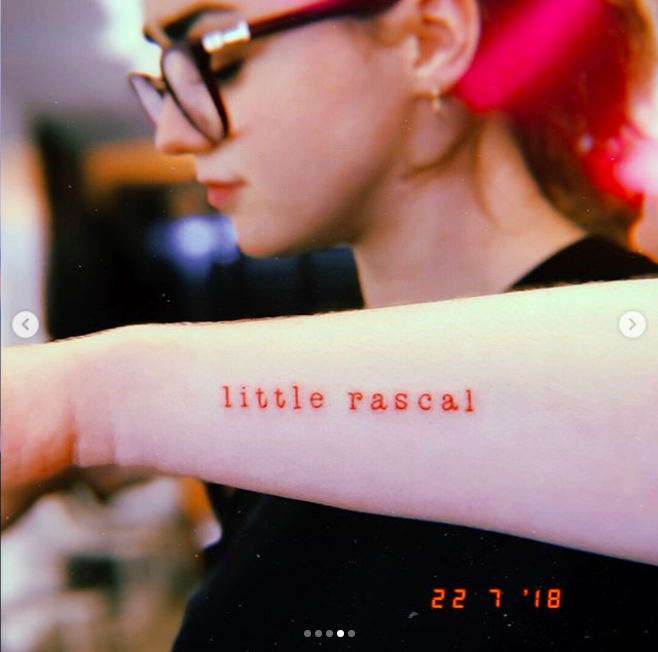 Willilams got the words “little rascal” tattooed on her arm, also in red ink. There’s no official word on what this one represents but it could have something to do with Arya. Or it could not! We honestly don’t know. It’s still a cute as hell tattoo, though. 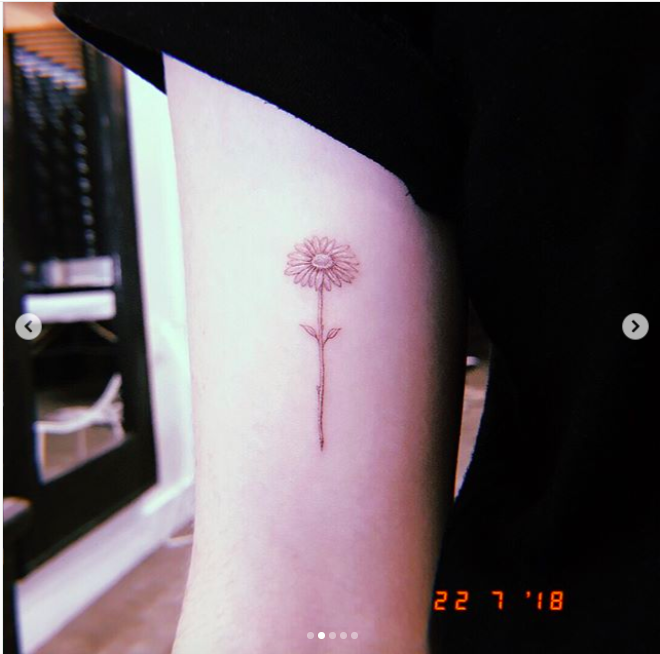 And, on that same day, Williams got a pretty little tattoo of a dainty daisy on her arm. That one was done in black and has no connection to Game of Thrones, it’s just a nice illustration done by Mr. K. 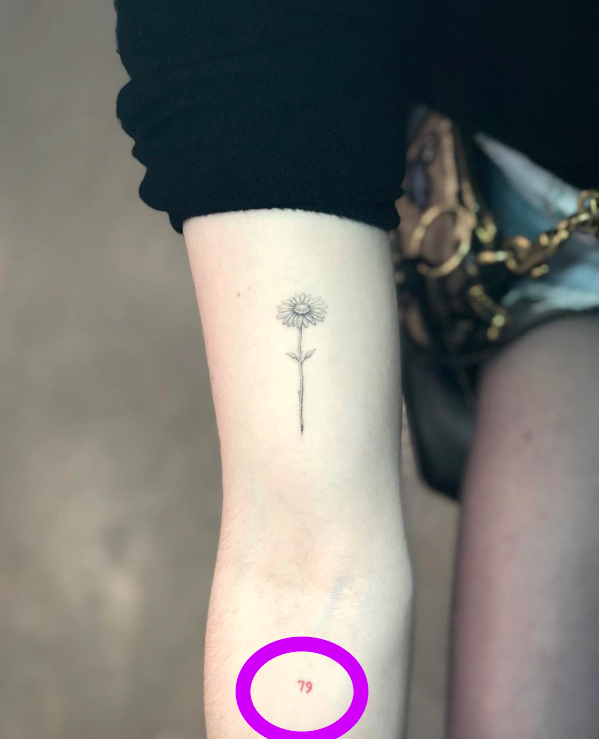 We’re not entirely sure when this one was done, but it was done by the same artist as the ones above, Mr. K, who works at New York’s Bang Bang. We also don’t know what 79 is for! A year? A favorite number? No clue. But it’s done in red, if that means anything! 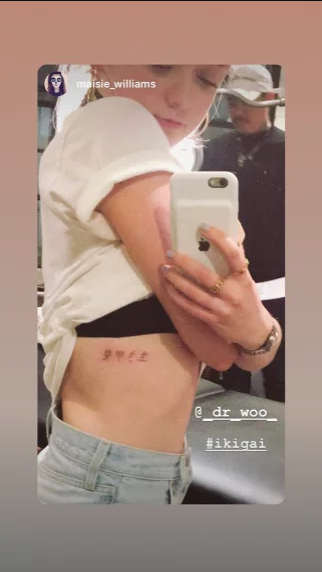 Last, we have these four Japanese characters that were done on Williams’ ribcage (OUCH) by Dr. Woo, an L.A. tattoo artist who’s tattooed a lot of celebrities. The characters comprise the word “ikigai,” which translates roughly to “thing that you live for.” According to Wikipedia, the word comes from Okinawa, a Japanese island (which you may remember from Karate Kid 2) where it basically means “a reason to get up in the morning.” Lovely!