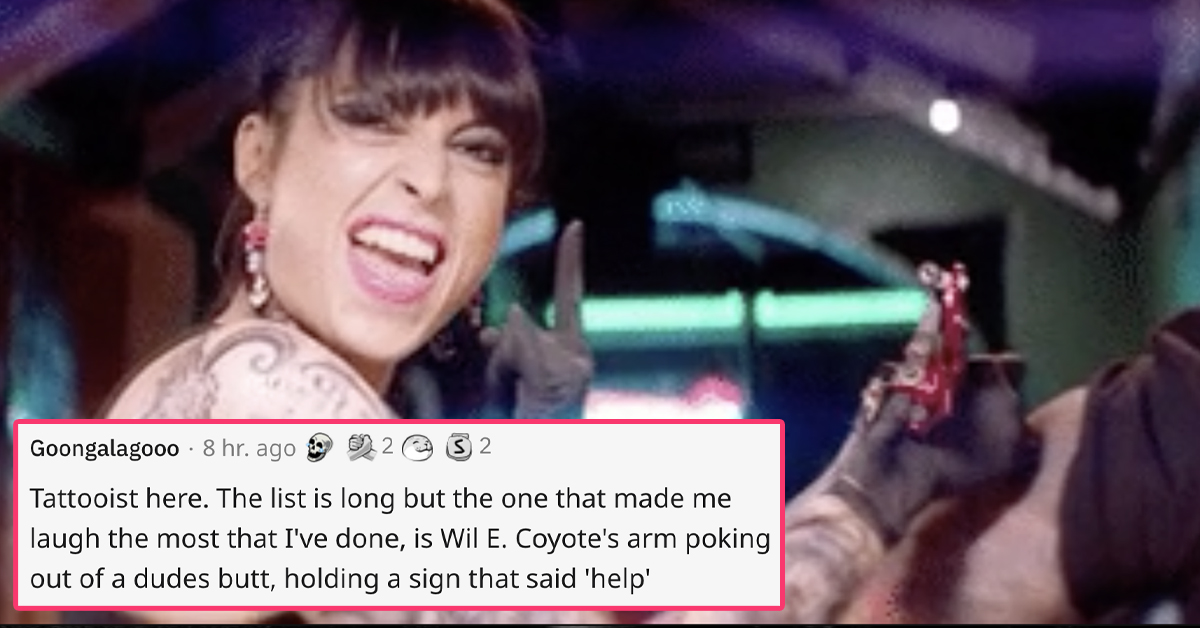 It’s a common fact that tattoos are permanent for most people since they probably can’t or won’t spend the cash to have them removed. And since it is a common fact, you’d think people would be more careful and intentional about the things they get inked, but you’d be wrong.

In a recent Reddit thread, tattoo artists are discussing the most screwed up thing they’ve ever inked.

The discussion began after someone asked the question: “Tattoo artists of Reddit, what is the most f–ked up thing you’ve tattooed?” The answers range from super inappropriate and NSFW to some truly hilarious images.

Here are 20 of the most screwed-up tattoos that have ever been inked.

Tattooist here. The list is long but the one that made me laugh the most that I’ve done, is Wil E. Coyote’s arm poking out of a dude’s butt, holding a sign that said ‘help.’

The mentor I apprenticed under once put the word “Trust” on someone’s d-ck. To pick up girls. “Hey baby…can I put my trust in you?”

Had a woman come into the shop one time way back who looked like she’d been in a tanning booth 8 days a week for the last 40+ years. She wanted to get her locked-up man’s name tattooed on her, but she wanted it “down there”.

She convinced me to get waaaay closer to her jukebox than I was comfortable with and had me tattoo “Billy Jack’s P-ssy” so far up in there that I think we’re common law-related now. (name slightly changed for anonymity).

The best part is that a couple of weeks later “Billy Jack” called me from prison to tell me how much he loved the tattoo. It was a collect call too. God damn it. Thanks for bringing that memory back. I was almost over it, lol.

I had two women come in to get a tattoo for their locked-up boyfriend/brother, respectively. They wanted “Daddy Savage” and “Bro Savage” on the chest. I guess his nickname was Savage because he just recently killed a guy. I didn’t get a call about how much he liked the tattoos though.

Girl had a dream about marrying a dolphin. She got a tattoo of her as a mermaid, rising from the water in an embrace with the dolphin. Halfway through, after hitting on me the whole time and telling me stories about an abusive ex, she started arguing about the color scheme and left with only the outline and some shading.

I once tattooed nipples on a guy’s butt cheeks, so his a– would look like tits.

Tinkerbell f-cking a light switch. I didn’t do it, an old coworker did. It turned out well but…jeez…

I was a piercer for a few years at a local shop. During my first year of my apprenticeship we had a younger, 20 something male who had come in to get his forehead tattooed. I handled majority of the paperwork for the tattoo artists at the time as well and he had requested the word FUBAR to be done. He went back into the booth with the artist at the time and was told to come back the next day after he slept on it because you know, it’s permanent and we wanted to make sure he was 100% certain. To all our dismay, he returned the next day to proceed with the tattoo. He had told us while getting tattooed that it was payback to his mother for favoring his older brother their whole life and he wanted to “return the favor” of how much she f–ked up his life. I’ll never forget the smile on his face as he walked out the door.

Tattooed a Jack Skellington head the size of a dinner plate on a girl’s lower back. tried to talk her out of it cuz she was young & tiny but she insisted. I feel lachrymose.

A zombie wearing a purple basketball jersey hacking a guys arm off, and vomiting. The guy is also vomiting up at the zombie and the streams of the two are meeting in the middle.

A cartoon fish being choked by another fish’s poo. The choking fish is trying to unravel the poo. At the top of this sleeve, there’s a first holding an aquarium net.

Said skin rip ended up looking like a vagina.

Bowser on a surfboard playing a double-neck guitar over a pot leaf over a cross with the text “Happy Birthday Rick.”

Fresh out of my apprenticeship, and at a point where I couldn’t really say ‘no’ and I was pressured by my boss to do anything that comes my way. I had this young couple come in with the girl wanting her bf’s name tattooed on her wrist. She seemed nervous as hell and he was mostly speaking for her. I tried communicating as best as I could with her and make sure she really wanted the tattoo but she only ever said ‘yes’ with her bf increasingly getting annoyed. While doing the tattoo, she was shaking constantly and the dude was making fun of her the whole time. She didn’t even smile when it was done, and they only thanked me briefly before leaving.

15. Neighbor of the beast

One dude asked for an armchair to be tattooed on his bum cheek. Did it. Never saw him again, I’m not even sure if I dreamt it or it really happened.

It was a normal day for me until a couple came in holding hands, the man sat down in the chair and I asked him what he wants and he said, my wife’s vagina on my forearm, so for some stupid reason I asked to see it and she stood there for hours with it out.

the original starter Pokémon smoking out of a bong. But like Charmander blowing fire on Bulbasaur and Squirrel in the body of the bong.

People ask for all sorts of unusual things but one of Strangest things I had to do was Gary the snail from SpongeBob on some lady’s “snail trail”. (The space between the belly button and the pubic mound) with the whole joke behind it being “it’s a snail on a snail trail”.