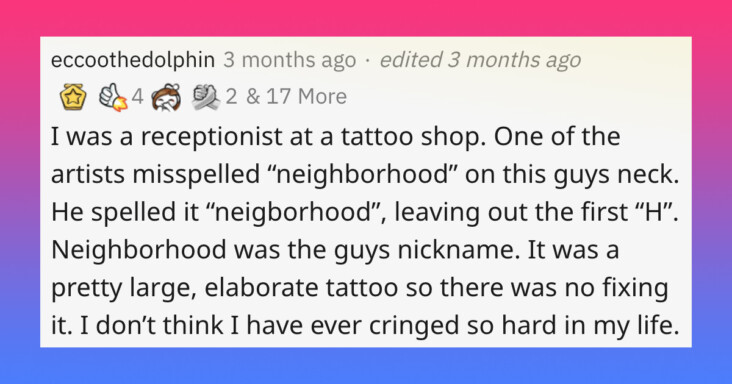 When you or I make a mistake at our job, it usually seems pretty fixable — but when tattoo artists run into snafus, it’s a much, much bigger deal.

“What are the worst mistakes tattoo artists have ever made on a client?”

“I was a receptionist at a tattoo shop. One of the artists misspelled ‘neighborhood’ on this guy’s neck. He spelled it ‘neigborhood,’ leaving out the first ‘H.'”

“Neighborhood was the guy’s nickname. It was a pretty large, elaborate tattoo so there was no fixing it. I don’t think I have ever cringed so hard in my life. The guy was surprisingly really cool about it. He did see the drawing and approved it before it was tattooed on. He ended up making the artist tattoo a ‘H’ on his palm so if anyone gave him crap about the misspelling he could smack that person with the missing ‘H’.” —eccoothedolphin

“I tried to tattoo “PATIENCE” on myself when I was 16, using the stick and poke method. I made it as far as “PATIEN” and stopped. I never finished it.”

“Eventually got it covered up when I was 28. Literally didn’t have the patience to finish it lol. It was a funny story to tell for all those years, and a lot of my friends were disappointed in me for covering it. But I have no ragrets .” —FROTHY_SHARTS

“Once had a client call the shop who was crying hysterically because, according to her, I had done her tattoo backwards. It took a few minutes to get her to calm down to the point where we realized she was looking at it in the mirror.”

“She apologized and hung up. The tattoo was on her back. When I placed the stencil, and finished the tattoo, the client was using two mirrors. A handheld one, and the wall mounted one. Using two mirrors, it looked correct (which it was). When she looked in just one mirror at home, it appeared backwards, the way a mirror works.” — willieyobslayer

“Worked as a piercer in a shop a decade ago. A guy came in and wanted “Murphys law”

“the artist freehanded a design on him, he greenlit it after watching in the mirror and they did a beautiful piece with a banner saying “murpys law”. Seemed fitting. The guy loved the fact that his one messed up tattoo was the murphys law one.” —xfactotumx

“I had a client email me asking for a four-letter acronym. I don’t do freehand script so I put the letters into a font generator and sent him back some options. He picked the one he liked best and we set an appointment date. On the day of his session, I showed him the acronym again and we chose a size. I placed the stencil and he approved it and I got started. Midway through the tattoo I asked him what the letters stood for and he told me. My heart stopped. The letters were in the wrong order. The middle two were swapped. I ran to the shop computer to check my email and sure enough, in his original email he’d sent me, they’d been correct. I had typed them into the font generator wrong. But to be fair, he had seen them several times since then and didn’t notice my mistake. I spent the rest of the session covering them up with another design he’d had as a backup tattoo idea and I didn’t charge him. But it was a good learning experience for me to always ask what initials/acronyms stand for ahead of time to make sure I get them in the right order.” —ALasagnaForOne

“I was doing a big ol’ tattoo of Cringer (AKA Battlecat) on a really cool client’s leg. I got so into doing this big, awesome tiger head that I forgot that it WASN’T a goddamn tiger and colored the stripes black.”

“I realized about a third of the way through filling them in and let the guy know. He was disappointed but mostly okay with it; I felt like I was going to puke. I finished the thing feeling so fu**ing sick and then refused payment. Man, going from that feeling of elation to IMMEDIATE crushing disappointment was hard to shake, and kind of dazed me. It was extra crushing because it was a fun tattoo during a time when I wasn’t that busy and was doing mostly absolute dreck. The payment was just the icing on the top, so letting that go was hard too. Ugh, just thinking about it now is making me feel sick.” —Graverobber13

“A few years ago I was tattooing a client who had apparently lost a bet, his buddies were allowed to tattoo something behind his shoulder as long as it wasn’t racist or offensive…”

Turns out the guy drew up a design of “A Leprechaun throwing up on a book”… Sure, why not, everyone was sober and they were paying pounds upfront.

Easy work- the drawing was really simple and the shading was easier than I thought it’d be.

Turns out everyone liked it… Except the guy with the tattoo of a Leprechaun throwing up on a book. He picked at the scab, trying to get rid of it, completely took it from bad to worse.

Comes in about ten days later, demanding a refund of money HE didn’t pay or the studio, not me, cover it up. Nope, management said you signed for it in your right mind and than damaged it yourself, personally I was yelled at and told NEVER tattoo anyone like that, it only works in television series or film.

Did I make a mistake? Yes and no.

The lesson here is don’t get involved in others drama when permanent body marking are involved.” —Mars_The_68thMedic

“I misspelled “forward.” It was a line of script on the side of a foot, and a last-minute addition to a couple other tattoos they were getting.”

“I quickly knocked it together on photoshop and nothing looked out of place, the client approved, so I made the stencil.

The next day they came back and pointed out that forward isn’t spelled “foreword”. I do a lot of reading and I guess it didn’t look wrong because I’m used to seeing it as the “foreword” of a book. I apologized profusely, feeling like a total a**, and told them to pick at the scab of the extra “e” and the “w” while they were healing (to make it fade) and come back in two weeks.

Fixing the O was easy and I was able to turn the E and W into a wide loopy W and add a bit of extra loops and flourish to other letters so that it looked totally fine in the end albeit a bit stylized. She was happy in the end and still comes to get work from me.

Ten years of tattooing and that one still haunts me. There have been other mistakes but they’re mostly the clients fault… things like dads getting their children’s birthdays wrong (happens a lot actually. Dude, I don’t know what month your kid was born… call your wife!).

Also, bonus story: the guy who spells his kids name wrong! I had him write their name down. Literally HE wrote it down. “Bently” I drew up a fun custom script, he loved it. Put the stencil on him and had him check it out (I even told him to make sure everything was right), all good. Did the lining and had him check it out while we took a break, loved it. Finished the shading and drop-shadow etc, all finished. He’s checking it out in the mirror, loves it, until I hear, “uhhh, what about the e?”

So I show him what he had written down, and he groans, “oh man, I always fu** that up… my wife is going to kill me!”

So I sit down with the original drawing and manage to turn part of the L and the Y into an E, add another couple lines to re-form the L and Y, and boom: Bentley. It worked out in the end and I felt like and absolute wizard, but fu**, DUDE, it’s your kid’s name and you didn’t notice the spelling was wrong the 10 times you checked it out during the process?!?

“When I was but a wee baby piercer, I worked at the biggest shop in my city which had 14 artists and 2 piercers. It was the peak of the tramp stamp trend…”

“(I’m still so sad that was the nickname, ass antlers was so much better) so when a super tiny 18 year old black woman came in and wanted her name on her lower back with a flower it was just normal. An older white male tattoo artist took her to pick a font, it took a minute (even though back then everyone went with Edwardian) but they came out, I had her do paperwork and he got the drawing finished. She okayed the design, she okayed the stencil, she sat for the tattoo, loved it, tipped him and left.

Two hours later she called back sobbing saying we ruined her life. The counter girl told her to come in and we would fix whatever was wrong. Tattoo comes back with her two gigantic, angry af friends who are ready to freak out. We finally see the tattoo.

Her name was Whitney. The “n” got left out in the font process. So huge across her lower back it said “Whitey”……. It was covered for free and with many apologies with three giant purple roses. The tattoo artist was so fu**ed up over that he didn’t come in for a week. It was an honest mistake, but it was the worst fu**ing spelling error I’ve seen.”–extracrispybridges

“I work at a tattoo shop with a few artists. One of our artists fu**ed up tremendously on a face tattoo. She did the stencil before hand and showed him, after his approval she started above his brow. He wanted “cursed” but he left the shop with “CUSRED” tattooed on his forehead. He was pissed of course, never saw him again.” —doometteowo